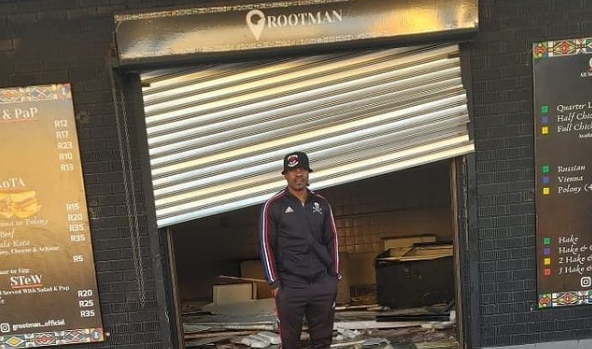 Social media users have responded with shock and anger at the looting of former Orlando Pirates star Lucky Lekgwathi’s restaurant this week.

The star opened up Grootman by Lucky Lekgwathi in Kliptown, Soweto, earlier this year, after hanging up his boots in 2016.

The restaurant employed several staff from the area but was hit hard by unrest in Soweto over the last few days.

Taking to social media on Monday, Lekgwathi shared a video and pictures of his vandalised store, alongside the caption “I leave everything to the Almighty God.”

The video shows the store gutted inside, with tables, chairs and appliances stolen.

Attempts to get comment from Lekgwathi on the looting was unsuccessful at the time of publishing this article. It will be updated once comment is received.

Several shopping centres and dozens of businesses were hit by looting and rioting in Soweto on Monday, including the Ndofaya, Jabulani and Maponya malls.

It spread to the area and other parts of Gauteng at the weekend after days of protests in KwaZulu-Natal linked to the incarceration of former president Jacob Zuma.

President Cyril Ramaphosa on Monday evening called for calm and said those responsible for the violence would face the “full might of the law”.

Pictures of the destruction to Lekgwathi's store were shared widely online and sparked outrage.

Former Bafana Bafana star Siphiwe Tshabalala said he was sorry to see the destruction, while sports and radio personality Mpho Letsholonyane said it was heartbreaking.

“I am so sorry Lucky. This is so heartbreaking. I honestly have no words,” she wrote.

Here are some of the other reactions:

Lucky Lekgwathi's restaurant is not even three months old. Now is in complete and utter ruin. Tomorrow when he's struggling, the same people who ruined his business and his livelihood will say he wasted his money when he was playing football. pic.twitter.com/ek0euPlyUb

My heart goes out to Lucky Lekgwathi and the people he employed.

Its sad and distressing to see your dreams trashed, in one fell swoop. I pray that you will rise above this in time. My heart bleeds!@rinmor @NicoleGraham031 @jsteenhuisen @Keekaimran @kubeshgovender https://t.co/0MbPhh5Nmw

Opened in April this year, today it was looted and damaged.

Lucky Lekgwathi was only trying to make a living. pic.twitter.com/ZLmH9gnrlx

Lucky lekgwathi opened this great place just few months ago its saddening what just happened to the whole place destroyed. He employed 4 people ...why destroy our own people?🥲🥲🥲 pic.twitter.com/iCdYGVhIiq

Lucky Lekgwathi opened this great place just few months ago in Gauteng, it's saddening what's happening the whole place is destroyed and 4 people were employed there.

Why destroy our people? This is not WMC but a young man who was working hard to make a living. pic.twitter.com/YJOHxooZB9

Rioting and violence has continued in KwaZulu-Natal and Gauteng on Monday, with scenes of shopping centres being looted and buildings burning.
News
6 months ago