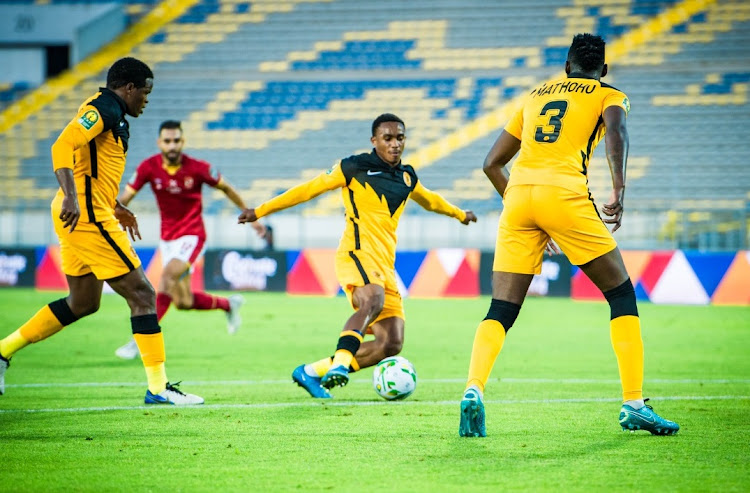 Al Ahly flexed their considerable muscle against a Kaizer Chiefs reeling from being reduced to 10 men in a contest where Amakhosi were already the rank underdogs, the Egyptian giants lifting their 10th Caf Champions League trophy with Saturday night’s 3-0 final win.

Chiefs had held their own until that moment but the match as a contest was ended by the Johannesburg team – already expected to punch well above their weight at the rarefied height they had reached – being reduced to a player less.

Ahly’s goals then came in mechanical procession from Mohamed Sherif in 53rd minute, Mohamed Magdy Afsha in 64th and Amr Al Sulaya in the 74th.

It was disappointment for South Africans at the defeat for Chiefs – the shock package of the 2020-21 competition, whose victory, having never reached the group stage, was a remarkable place in the final.

But that disappointment was balanced to a large degree by Ahly’s South African coach Pitso Mosimane entering the pantheon of African coaching legends.

The son of the soil who is striding the stratosphere of global coaching earned his third Champions League title, again displaying a coaching master class in charge of an Ahly generation that is clearly strong, but also still in some form of rebuilding.

Mosimane became only the fourth coach in the 57-year history of the Champions League to win back-to-back titles, matching the feat too of the man considered Ahly’s best coach of the modern era, Portuguese Manuel Jose in 2005 and 2006. Jose won four Champions Leagues, and Mosimane now stands alone in second place on three.

Ahly, who had not won the Champions League for a frustrating seven years before Mosimane’s arrival, went to their Decima of 10 titles. It is the stuff of legend for Africa’s Club of the 20th Century, and their coach.

Mosimane and Chiefs coach Stuart Baxter renewed a chess battle that goes back to when they sparred for Premier Soccer League titles when the latter was last at Amakhosi in the first half of the 2000s. Consequently, the opening half saw a tactical, absorbing exchange of movements of the pieces.

More open than expected, Chiefs early on had the organisation that so troubled Wydad Athletic at the same ground in a 1-0 win in the semifinals, but were more willing to commit numbers to the transition.

As the half wore on Ahly’s class showed when they lifted the tempo in the final third, creating situations that rattled Amakhosi and caused the SA club to lose shape.

Samir Nurkovic got in the first jab in the fencing battle, curling a strike that was comfortably held by Mohamed Elshenawy.

Ahly lifted the power. Dangerous right-back Akram Tawfik’s cross was cleared by Erick Mathoho to be chested by Al Sulaya into the path of the Egyptians’ star playmaker, Afsha, who spooned a volley past the top-left corner.

Amakhosi had lost some direction, but would have been immensely satisfied to go to the break and regroup at 0-0. Then Mashiane, unnecessarily in midfield, and the youngster surely influenced by trying too hard in the midst of the occasion, threw himself into a dangerous over-the-top challenge, catching Tawfik’s foot.

Referee Pacifique Ndabihawenimana of Burundi initially produced a yellow card, but the VAR adjusted that to red.

Chiefs faced a long slog staying in the contest with 10 men as Baxter brought on a wild card in Khama Billiat for Nkosingiphile Ngobo back from the change rooms. It was an ask too far.

Just seven minutes into the half, the Red Devils scored. That man Tawfik took a pass at the touchline and skipped inside Reeve Frosler, his pass piercing Chiefs’ defence as centre forward Sherif peeled unmarked from Amakhosi’s centrebacks and chipped Daniel Akpeyi.

Chiefs were beyond stretched. Ahly could toy with Amakhosi’s defence for their second, Ashfa’s classy strike from the edge of the box leaving Akpeyi with no chance of a save.

A third was inevitable, Daniel Cardoso and Frosler backpedalling like the exposed defenders trying to save the blushes of a school side up against a men’s club team as Sherif’s backheel teed up Al Sulaya for another gem of a strike.

Kaizer Motaung Jr's rallying call to players: Give a magical performance and be crowned kings of Africa

Kaizer Chiefs sporting director Kaizer Motaung Jr has issued a rallying call to the players to produce a magical performance against Al Ahly and ...
Sport
6 months ago

The SABC has reacted with surprise and disappointment that Caf sold the rights to broadcast the Champions League final between Kaizer Chiefs and Al ...
Sport
6 months ago

Minister of communications and digital technologies Stella Ndabeni-Abrahams has stepped in to resolve a compromise that will allow the SABC to ...
Sport
6 months ago

Baxter back on Kaizer Chiefs’ bench in Champions League final

In a potential psychological boost to Kaizer Chiefs, Stuart Baxter will be on the bench when they meet Al Ahly in the Caf Champions League final at ...
Sport
6 months ago