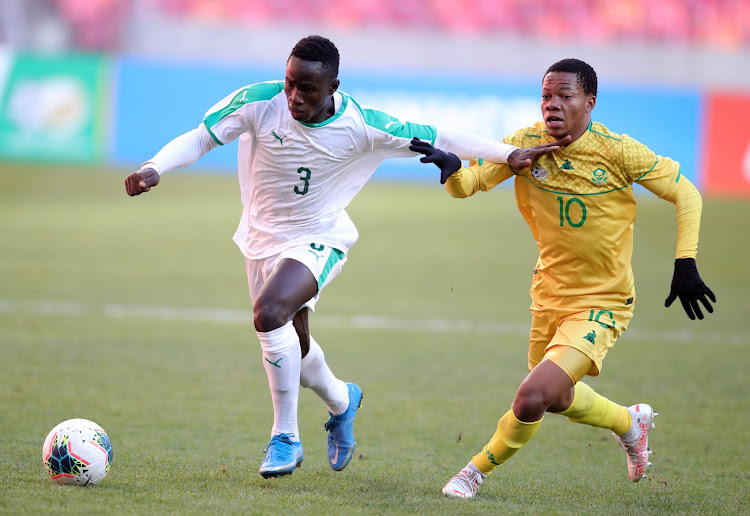 Bafana Bafana have earned the right to smile again after the long-suffering national side beat Senegal on penalties to win the 2021 Cosafa Cup at a stadium that was named to celebrate former statesman Nelson Mandela on his birthday.

As the globe celebrated the former president and tried to make a difference on Mandela's birthday, this shadow Bafana squad had to dig deep to beat the West Africans 5-4 on penalties at the Nelson Mandela Stadium after struggling to find a way past the visitors in regulation time in a tight match that was too close to call at times.

The oldest man on the Senegal squad, Pape N'Diaye, ballooned his kick over the bar during the penalty shootout and effectively ended the contest, giving the South Africans something to smile about.

The Senegalese had put in a hard shift in Gqeberha to force their hosts to go to extra time, but when it came to the crunch, Bafana held their nerve during a tense lottery to win this encounter and wrap up the regional competition in fine  style in the Eastern Cape.

The two sides cancelled each other out during the initial 90 minutes, and the subsequent extra time, and it was always going to boil down to the side that managed to hold its nerve and displayed a greater sense of mental strength during a tense shootout.

Man of the man Siyethemba Sithebe was excited after winning some silverware in the Easter Cape and said the outcome, and the accompanying accolade, had given him plenty to celebrate.

"Jah, eish, I am so happy, I'm so happy, very, very excited. Since the start [of the tournament] the team has been working [hard], the coaches, guys, tactical, I will not lie, everybody worked," he said.

Bafana were expected to struggle as they were depleted, with some players at the Olympic Games in Japan, others in Egypt after playing with Kaizer Chiefs in the Caf Champions League against Al Ahly on Saturday night, and  some remaining in Europe where they are based.

But after struggling to impose themselves in the initial stages of this 20th edition of the regional event, they eventually competed and it was no surprise when they emerged victorious.

They had put up a strong showing to power 3-0 past Mozambique in their Cosafa Cup semifinal at Nelson Mandela Bay Stadium on Friday night, and reach their fifth final of the regional tournament.

SA, who have often underperformed in the competition, have also never lost when they have managed to reach a Cosafa final.

They competed to lift their fifth trophy in Sunday’s final against guest team Senegal, who beat Eswatini on penalties in their semifinal.

The competition returned after it was cancelled last year due to the coronavirus pandemic and the Senegalese certainly made good use of their invitation to the south of the continent by going all the way to the final of the regional football event.

The Council of Southern Africa Football Associations (Cosafa) usually invite sides from outside of the region to compete as guests and Senegal made so much of a nuisance of themselves that they gave the hosts a fright in the title decider in the Eastern Cape on Sunday afternoon.

Bafana have had a torrid year after failing to qualify for next year's Africa Cup of Nations in Cameroon - the disaster led to the sacking of coach Molefi Ntseki in March - and their success in Gqeberha will have given the side a confidence boost ahead of the more daunting challenges they face in the coming weeks.

New Bafana coach coach Hugo Broos has some kind of a foundation as the national team have tricky 2022 World Cup qualifiers to content with in the coming weeks.

The 69-year-old Belgian coach has sat out the Cosafa Cup as he returned home for his second Covid-19 vaccination soon after his appointment in the beginning of May and has not taken his place on the bench in the team's recent matches.

He missed Bafana’s friendly against Uganda at Orlando Stadium last month‚ and also did not play a role in the team's participation in the Cosafa Cup.

The start of 2022 World Cup qualifiers was postponed to September due to contentious Covid-19 testing protocols‚ and to also enable some African countries time to upgrade their facilities to meet Fifa standards.

Bafana are in Group G with Ghana, Ethiopia and Zimbabwe in the 2022 Fifa World Cup qualifiers. Their road to Qatar will start against Zimbabwe and Ghana during the Fifa international week in September.

South Africa have confirmed three positive Covid-19 cases in their soccer squad for the Olympic Games in Tokyo, including players Thabiso Monyane and ...
Sport
9 months ago

Al Ahly flexed their considerable muscle against a Kaizer Chiefs reeling from being reduced to 10 men in a contest where Amakhosi were already the ...
Sport
9 months ago

Al Ahly were hungrier for their 10th Caf Champions League final‚ and ultimately the class of a team who had convincingly reached the final showed ...
Sport
9 months ago