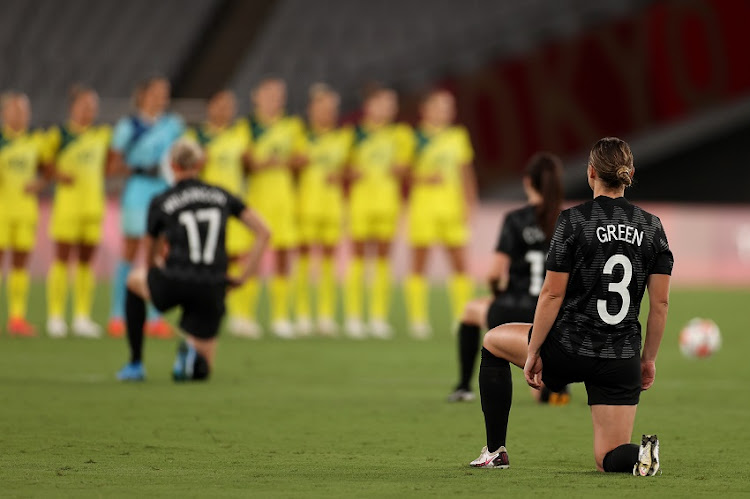 Anna Green #3 of Team New Zealand takes a knee in support of the Black Lives Matter movement prior to the Women's First Round Group G match between Australia and New Zealand during the Tokyo 2020 Olympic Games at Tokyo Stadium on July 21, 2021 in Chofu, Tokyo, Japan.
Image: Dan Mullan/Getty Images

Great Britain's women's footballers took the knee before their Tokyo Olympics opening 2-0 win over Chile on Wednesday, fulfilling a pre-Games promise to support racial equality and establishing a significant precedent later followed by other teams.

On the first day of sport at Tokyo 2020 and with the International Olympic Committee confirming the gesture did not violate its Rule 50 banning political statements, the United States and Sweden both followed suit ahead of their match, as did New Zealand.

"For us it really feels right to stand up for human rights," Swedish defender Amanda Ilestedt told reporters after her team's 3-0 victory.

"It was a communication with the U.S. team before, so for us it feels good to do that and it is something we stand for as a team."

For Team GB captain Steph Houghton it was important to follow through with a promise made before the Games.

"Taking the knee was something we spoke about as a group. We feel so strongly and we want to show we're united," she said.

"We want to fight all forms of discrimination and as a group of women we wanted to kneel against it.

"It was a proud moment because the Chile players took the knee too to show how united we are as sport."

Black players in the England men's team were subjected to a storm of online racist abuse this month after their Euro 2020 final defeat, drawing widespread condemnation from the squad's captain, manager, royalty, religious leaders and politicians.

The IOC's Rule 50 forbids any kind of "demonstration or political, religious or racial propaganda" in Olympic venues and any other Olympic area.

But the Olympic body has been under mounting pressure in recent years to allow more freedom of expression for athletes on the field of play and not just in news conferences, interviews or the venues where spectators can see them.

New Zealand also took the knee in their match against Australia at the Tokyo Stadium while their opponents did not. However, the Australia players held the country's indigenous flag when they posed for their pre-game team photo.