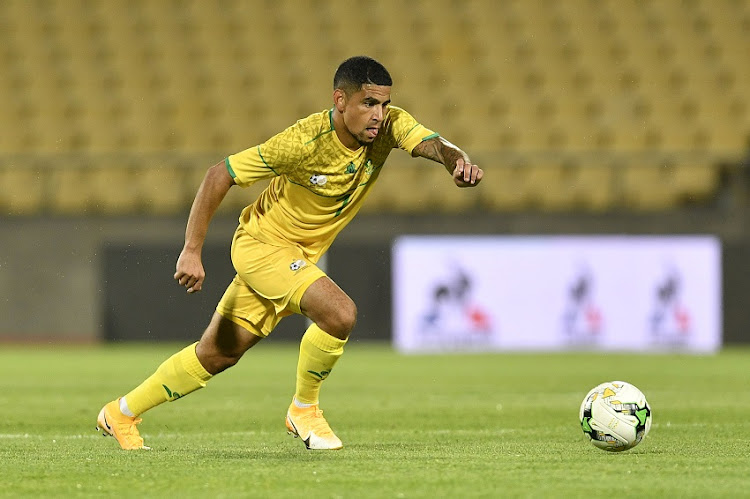 Keagan Dolly during a match between Bafana Bafana and Namibia at Royal Bafokeng Stadium on October 8 2020 in Rustenburg.
Image: Lefty Shivambu/Gallo Images

Kaizer Chiefs’ energetic activity in the transfer market is continuing‚ with a number of high-profile players on the club’s radar and Amakhosi apparently close to signing Keagan Dolly and Cole Alexander.

A source close to developments has told TimesLIVE that there are a few loose ends to be tied up for Montpellier left midfielder Dolly‚ who is out of contract‚ and ex-Bidvest Wits defensive central midfielder Alexander to join Amakhosi.

The source indicated that the arrival of Alexander, 32, could spell the end of contract renewal negotiations for Amakhosi’s 10-year midfield servant Willard Katsande, 35.

Alexander is also out of contract as his deal for Odisha FC in India — where he was signed by new Chiefs coach Stuart Baxter‚ who is known to be a fan of the defensive midfielder’s capabilities — ended this month.

Their 3-0 defeat in the Caf Champions League final against Al Ahly on Saturday was a reminder for Kaizer Chiefs that they have much work to do ...
Sport
1 year ago

The signing of Dolly, 28‚  whose career in France has been plagued by injuries‚ would be one of the biggest-news transfers of the 2021-22 preseason window. The Bafana Bafana star’s arrival at Naturena would genuinely display Chiefs’ ambition to inject quality in their squad on the back of six unprecedented campaigns without silverware.

Dolly has played four-and-a-half seasons in Ligue 1 since signing for Montpellier from Mamelodi Sundowns midway through the 2016-17 season. He had a much-improved campaign in 2020-21‚ making 18 league appearances‚ though 15 of these were substitute appearances‚ as Montpellier ended eighth. He also played three cup games.

Dolly would re-establish the famed ‘CBD’ attacking trio at Amakhosi — along with Leonardo Castro and Khama Billiat — who were instrumental in Sundowns’ 2016 Caf Champions League victory‚ assuming reports of Billiat exercising a year’s option on his contract are correct.

Reports from Egypt have been that Chiefs have been in a bidding war for Dolly with Egyptian giants Al Ahly‚ who they lost 3-0 to in the 2020-21 Champions League final in Morocco this month. Another report has been that Dolly just needs to undergo his medical at Naturena.

Chiefs have announced six signings — Brandon Peterson‚ Sifiso Hlanti‚ Phathutshedzo Nange‚ Njabulo Ngcobo‚ Sibusiso Mabiliso‚ Kgaogelo Sekgota and Thabani Dube — as they have shown their intentions to rebuild for 2021-22. Midfielder Given Thibedi has been recalled from two seasons on loan at Swallows FC.

Asked for confirmation of Alexander’s arrival at Chiefs‚ and Katsande’s potential exit‚ Sean Roberts‚ the intermediary of both‚ said on Tuesday morning he could not comment.

Chiefs’ communications manager Vina Maphosa could not be immediately reached for comment. Dolly’s agent‚ Paul Mitchell‚ could also not be reached.

Kaizer Chiefs are continuing to bolster their squad after announcing the signing of Thabani Austin Dube from Richards Bay United on Monday.
Sport
1 year ago

Kaizer Chiefs chairman Kaizer Motaung has issued a message of encouragement to Happy Mashiane after he was red carded in the dying stages of the ...
Sport
1 year ago