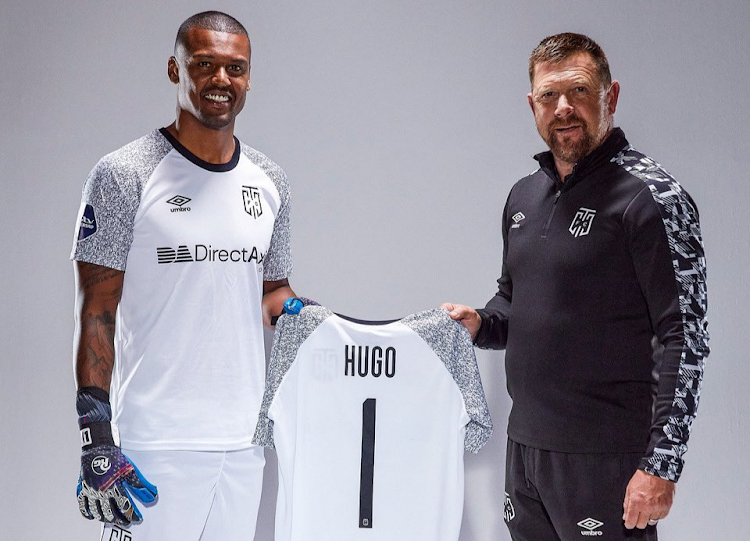 Marques, who played most of his long career in the lower divisions in Portugal, joined City this week and Tinkler believes he has the necessary experience to cover for the injured Keet.

“Unfortunately Darren Keet had a long-term injury when he joined the club and he is going to be out for an extensive period. So, we truly believed that we needed someone with experience,” Tinkler said as City prepared to take on AmaZulu in their MTN8 quarterfinal at Moses Mabhida Stadium on Sunday.

“As much as we recognise the talent of Marc Anderson, unfortunately he doesn’t have the experience that is required for us to achieve the objectives that we have set for ourselves this season.

“We needed to bring someone with experience and Hugo was the obvious choice because he comes with bags of experience. He has played in Europe for a number of years and he has played more than 1,000 games.

“He brings a lot of experience and the fact that he can speak English also helps immensely. He is someone I know because I have a lot of contacts in Portugal, so it wasn’t a difficult decision to bring him in.”

Cape Town City have announced the signing of midfielder Katlego Mokhuoane on a four-year deal.
Sport
11 months ago

Tinkler said Keet will be out of action for at least three months.

Tinkler added that if Marques doesn’t get his work permit in time for the match, it will either be Bongani Mpandle, who has joined from Maritzburg United, or Anderson between the sticks.

“We are still waiting on that decision of who will be in goal. Marques would be available if the work permit is sorted out but Bongani was brought in as the second-choice keeper. So, Bongani would be the natural second choice if Hugo is not available.”

Tinkler said while City had a good preseason he will only know how they prepared as official matches start coming in thick and fast.

“Our preseason has been very good, we are moving into the end of week six and I am happy with what I have seen. We have played a couple of friendly games and I was happy with the performances of all the players in those friendlies," the coach said.

“I think we have put together a competitive squad, and everybody seems to be raising their hand and wanting to play in that first match against AmaZulu. We will only truly know once the referee blows that whistle and the game kicks off.

“We will know where we are in terms of fitness level and whether we did enough during preseason or if there are still areas that need improving on.

“AmaZulu had a successful campaign last season where they finished second, but I think we will be up to the task because the boys are motivated and confident.”

The sale of the Premier Division status of Bloemfontein Celtic to Royal AM has been approved, according to a letter sent by the Premier Soccer League ...
Sport
10 months ago

Royal AM have confirmed they are in the process of purchasing the Premier Division franchise of Bloemfontein Celtic.
Sport
10 months ago

Cape Town City chairman John Comitis has denied Thabo Nodada and Taariq Fielies will be the next two signing announcements made by Kaizer Chiefs.
Sport
11 months ago