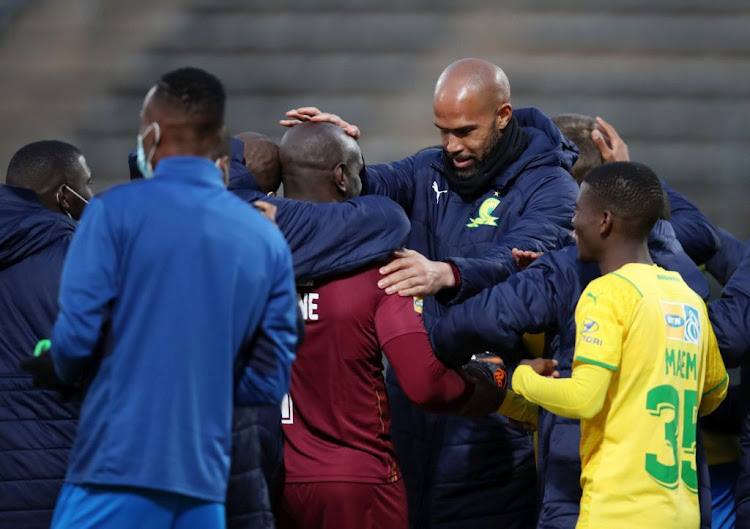 Goalkeeper Kennedy Mweene was the hero for Mamelodi Sundowns as the Brazilians beat Kaizer Chiefs on penalties to advance to the semifinals of the MTN8 at Lucas Moripe Stadium on Sunday afternoon.

Man-of-the-match Mweene made four saves during the spotkicks and was only beaten by Keagan Dolly as Sundowns won the tense shootout 2-1 in Atteridgeville.

Mweene delivered a sterling performance during the shootout and was also in inspired form during regulation time, where the two sides cancelled each other out to finish at 2-2 after extra time.

It was a game of intense drama and Sundowns were always expected to take the game to a Chiefs side that is still very much in the building stages under new coach Stuart Baxter, and trying regain its foothold in the domestic game.

And indeed, the Brazilians did exactly that in regulation time when livewire Peter Shalulile rose above two Chiefs defenders to beat goalkeeper Itumeleng Khune with a fine header after a fine delivery from Lyle Lakay in the ninth minute.

Shalulile developed an incredible appetite for goals last season and Baxter will have been disappointed by the relative ease the Namibian had when rising above his supposed minders to put the home side first on the scoreboard.

Sundowns were not done and returned to haunt defenders Erick Mathoho and Daniel Cardoso in the 23rd minute when Mothobi Mvala delivered a crisp pass that found Themba Zwane, and the footballer of the of season did not need a second invitation to beat Khune with a low shot.

It seemed the flood gates would open at that stage as Chiefs were struggling to contain the league champions. But Baxter's teams always have a tough determination about them and it was no surprise when the visitors pulled one back courtesy of veteran Bernard Parker after a delivery from Njabulo Blom in the 38th minute.

The two sides went into the half time break with Sundowns leading 2-1. But Chiefs had other ideas in the second half and former Sundowns players Keagan Dolly and Khama Billiat linked up to draw Amakhosi level at 2-2 in the 58th minute in Atteridgeville.

Dolly delivered the crisp pass that Billiat used to perfection to beat Sundowns goalkeeper Mweene and draw level in the 38th minute.

The two sides could not find a way past each other after that and went to extra time still locked at 2-2.

But the extended period did not yield any change and it was left up to the lottery of the shootout to decide the outcome of this encounter.

Sundowns then held their nerve to win and advance to the semis.