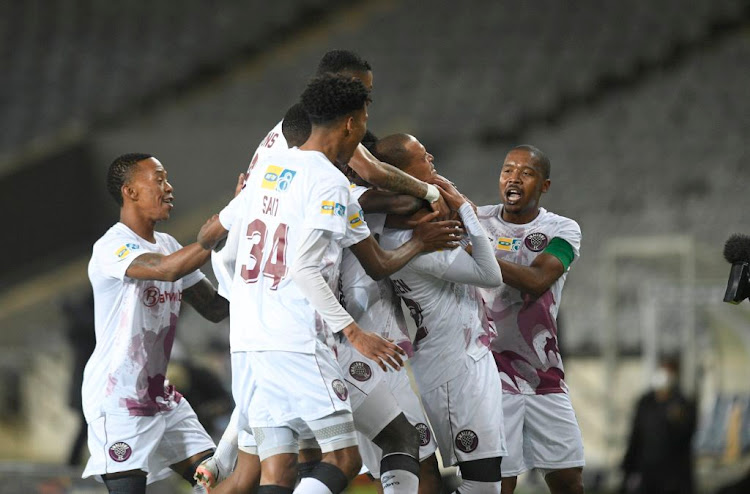 Swallows FC striker Ruzaigh Gamildien and his team-mates celebrate one of his goals against Orlando Pirates in the MTN8 quarterfinals at Orlando Stadium on August 14 2021.
Image: Sydney Mahlangu/BackPagePix/Gallo Images

Striker Ruzaigh Gamildien was destabilised by the negotiations for a move to Kaizer Chiefs in the second half of last season and now that his mind is back on Moroka Swallows, he can return to form, Birds coach Brandon Truter has said.

Gamildien scored a classy brace inside the opening 25 minutes that saw Swallows take a lead that Orlando Pirates were unable to fight back from, Truter’s team running out 2-1 winners in their MTN8 quarterfinal at Orlando Stadium on Saturday night and knocking the holders out of the competition.

Gamildien’s 11 goals saw him finish the fourth top-scorer in the 2020-21 DStv Premiership as the Birds finished a creditable sixth in their promoted season. But the ex-Bloemfontein Celtic, AmaZulu and Chippa United striker failed to score from March. As for Swallows,  the wins also dried up, with the Birds ending the campaign with 20 draws.

Truter believes the media reports on Gamildien’s potential move to Chiefs distracted the striker, and now that he can focus on his career at Swallows again, the 32-year-old can find his touch in front of goal again.

“He’s in a better space. I think last season when the news broke in the media that he might be going to Chiefs, and that there were talks he would be joining them, that disturbed his rhythm,” Truter said.

“But the deal fell through, basically, I think, because of the duration of the contract and what Chiefs were offering.

“And I’m just happy for our chairman [David Mogashoa], and that we could step in and better the deal for Gamildien to stay here at Swallows.

“That brought stability. And I think once the player is stable and the coach is happy with him, also the players around him are gelling so much, the family atmosphere at Swallows is huge, and Gamildien is part of that family.

“And he also plays that part in keeping that change room and the atmosphere going. So a stable player, a happy player, will perform like this, and I’m just happy for him.”

Gamildien’s first goal on Saturday night came from a scorching 16th-minute free-kick from the left edge of Pirates’ box that beat Richard Ofori at the keeper’s near post. The second, in the 23rd, came after Ofori gave away the ball outside his box, Gamildien chipping into an exposed goal from 30 metres.

Kabelo Dlamini pulled one back from the penalty spot on the half-hour.

AmaZulu FC will face Cape Town City in the MTN8 quarterfinal at the Moses Mabhida Stadium in Durban on Sunday with two former Kaizer Chiefs players ...
Sport
5 months ago

Gumede's boots provide the difference as Arrows down SuperSport on penalties