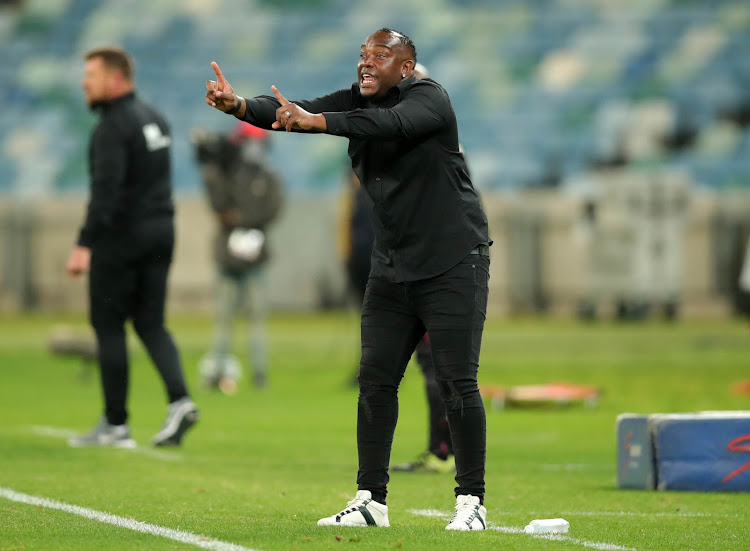 Eric Tinkler advanced to the semi-finals of the MTN8 on Sunday at the expense of much more fancied AmaZulu, but the Cape Town City coach soon found himself on the defensive after his opposite number Benni McCarthy pigeonholed him as “the master of counter-attacking” football.

Tinkler’s City scored early in the first half through exciting left-back Terrence Mashego at the Moses Mabhida Stadium in Durban, and while Lehlohonolo Majoro equalised for AmaZulu, the Cape side struck again late in the second half via Mduduzi Mdantsane to send McCarthy’s Usuthu crashing out of the R8m cup competition after a 2-1 defeat.

City pressed AmaZulu high and were rewarded with an early goal, and McCarthy admitted they did not expect their visitors to press them as high as they did.

“Not a result we wanted and definitely not what we expected,” said McCarthy after the match.

“It is a new season and some players have to get used to the way we play and do things.

“But Eric Tinkler, the way he sets his team up, very defensive and, ja, they stopped us from penetrating and hurting them and to get that second goal we so desperately needed.

“I think they played counter attack football very well and the speed they have upfront, and quality of their players, if you allow them the opportunity they can punish you.

“They are a counter-attacking team and when they got the opportunity, one chance from our mistake, they managed to score the winner with three minutes to go, and it was basically lights out for us,” said McCarthy.

“[Kaizer Chiefs coach Stuart] Baxter and Eric [Tinkler], these guys are masters at what they are doing with counter-attacking football.”

City coach Tinkler admitted his team sat back and he explained the reasons behind the decision.

“This was going to be a tough game and if there is one thing I have tried to introduce at Cape Town City is that it is not always about playing pretty football in terms of getting results,” said Tinkler, who rejoined City in May.

“Sometimes you have to play ugly football to get the results, and I think to a degree we did that tonight.

“I thought we started the game very well and in the first 10 to 20 minutes we looked good.

“We created one or two little situations that ended up with a very nice goal scored by Terrence.

“But immediately after we shut down and we seemed to go into our shell and then we started having to soak up a lot of pressure from them.

“They started to press us a lot higher and we struggled to get out of our build-up phase.

"Once we got out of our building phase in our second phase our passing was not great and we kept giving possession back to them.

“We tried to fix that at half time. The intensity was very high because there were a lot of transitional phases and the team losing possession and having to recover and chase.

“I explained to the players at half time that it was going to be about who wants it more and I think that what it was at the end of the day. We stuck in there.”

Tinkler, who faced the media after McCarthy, was told what his opposite number said regarding counter-attacking football remarks.

“I think many people don’t know the Tinkler formula, to be honest, because everybody has this opinion about me being a counter-attacking coach but counter attack happens in your own half.

“But, like I said earlier, we started to drop off, which is not what we needed to do against the opposition we played today.

“For me it is always going to be to analyse the strengths and weaknesses of each of the opposition and determine exactly what our approach is going to be.

“But I know there are a lot of people out there who believe that I play on counter attack but I don’t.

“I actually play on transitions and there is a big difference.

"Many people think there is no difference but there is a massive difference between transitional football and counter attack football," said Tinkler.

McCarthy will open his DStv Premiership campaign with a trip to Loftus to face champions Mamelodi Sundowns on Friday while Tinkler’s City host SuperSport United at Athlone on Saturday.

Bloemfontein Celtic, famously one of the best-supported clubs in the DStv Premiership, are to join those relegated to the scrap pile when an official ...
Sport
10 months ago

The sale of the Premier Division status of Bloemfontein Celtic to Royal AM has been approved, according to a letter sent by the Premier Soccer League ...
Sport
10 months ago

Bruno Fernandes scored a hat-trick in front of a raucous Old Trafford as Manchester United thrashed Leeds United 5-1 to get their Premier League ...
Sport
10 months ago

Chelsea, Manchester United and Liverpool all served notice of their title intentions with crushing wins as the Premier League enjoyed a return to its ...
Sport
10 months ago

Kabelo Dlamini scored a 30th-minute penalty, but it was not enough to earn Bucs a spot in the MTN8 semi-final.
Sport
10 months ago