Broos to consult Janevski and Mkhalele on naming Bafana captain 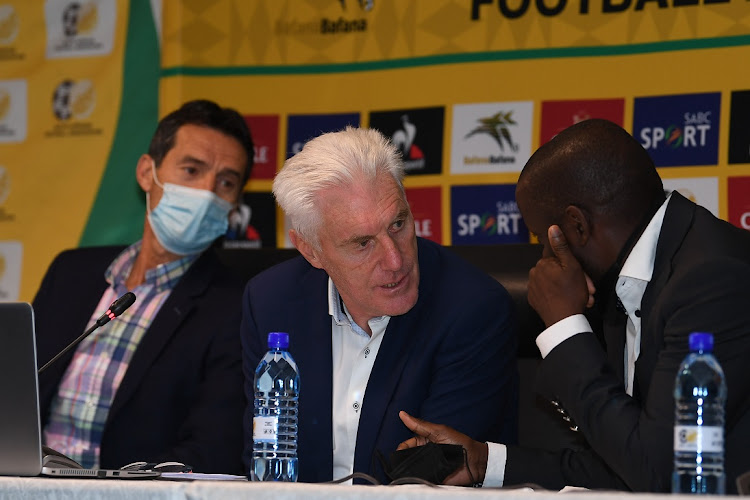 Bafana Bafana coach Hugo Broos says he will identify his captain when he whittles down a current 31-man preliminary squad for two 2022 World Cup qualifiers to 23.

Broos, who named an adventurous preliminary squad with SA's younger talent on Thursday, said he also wants to discuss the captaincy appointment with his assistant coaches Cedomir Janevski and Helman Mkhalele.

“First of all I need to know who the 23 players will be,” Broos said. “I already have something in mind. But I want to first of all discuss it with my two colleagues here, and also with the team manager, and we will see who will be the captain. So I can't answer that question now.”

The 69-year-old Belgian, who won the 2017 Africa Cup of Nations with a young Cameroon missing a number of front-line players, kept to his promise made upon his appointment in May of changing things up, ushering in a new dawn, and rebuilding with youth.

He will announce his final 23-man squad in about two weeks.

Bafana Bafana coach Hugo Broos kept to his promise of an emphasis on youth, naming a 31-man preliminary squad for the team’s first two 2022 World Cup ...
Sport
5 months ago

Bafana Bafana have earned the right to smile again after the long-suffering national side beat Senegal on penalties to win the 2021 Cosafa Cup at a ...
Sport
6 months ago

Safa CEO Tebogo Motlanthe says new Bafana Bafana coach Hugo Broos is yet to be paid a salary since his appointment on May 5.
Sport
6 months ago