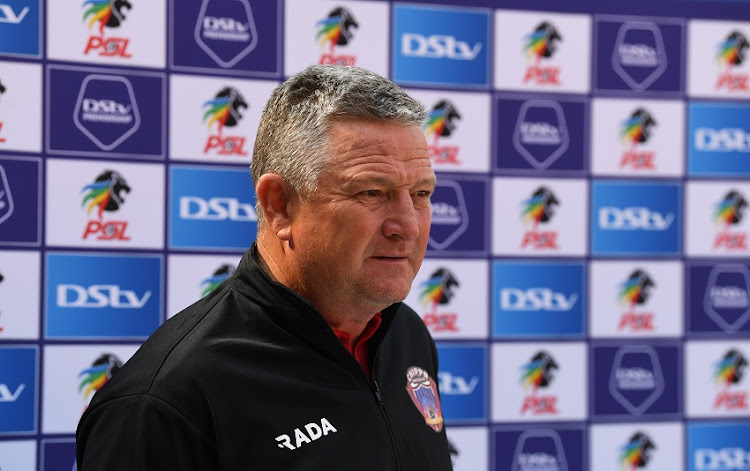 Chippa United coach Gavin Hunt is confident he will have a committed team that is going to improve and show more determination on the field.
Image: Lefty Shivambu/Gallo Images

Chippa United coach Gavin Hunt gave a hint of his plans for the coming season when he unveiled 15 new signings on Thursday, ahead of the new campaign.

The Gqeberha side face a tricky start when they travel to newcomers Sekhukhune United in the opening round of the DStv Premiership on Saturday.

A lot has been written about how Chippa want to avoid having to fight to save their status again this season. Hunt has gone to great lengths to ensure he has given the team a fighting chance of improving on last season and has bulked up his squad. On Thursday he made his intentions clear through their signings, with former Al Ahly and Mamelodi Sundowns attacking midfielder Phakamani Mahlambi, 23, also coming into the mix.

Hunt said each signing was carefully thought through as it was where the team needed players.

“We didn’t just sign good players, we needed players in these positions,” Hunt said, adding that unlike other clubs who could just buy players “we had to look for players who are out of contract or whom clubs don’t want”.

Hunt said his squad was lacking in the rearguard.

Despite this, Hunt is confident he will have a committed team that is going to improve and show more determination on the field.

“That is important. There are a lot of changes coming in. As a coach you would like to do it overnight but it doesn’t work like that. So we are implementing changes slowly but surely right from the top to the bottom.

“A lot of players have left yes, and a lot of players have come in. There has been some change, but if you want different results we need to change the process. We cannot allow a club of this stature to be in the same position as it was last year, we need to improve and I said we will improve. But right now we will take it one step at a time.”