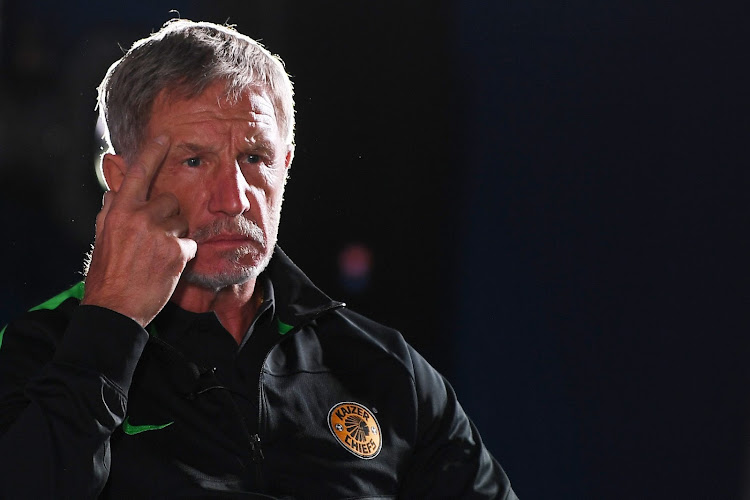 It should not be a surprise that Kaizer Chiefs have started 2021-22 at times patchily, coach Stuart Baxter has said as his team prepare to kick off their DStv Premiership season against TS Galaxy at Mbombela Stadium on Sunday.

In fact, the coach says, he is pleasantly surprised at how far Chiefs have come considering a number of factors, the most pressing of which was a shorter preseason than anyone else due to playing in the Caf Champions League final on July 17. Chiefs lost 3-0 to Al Ahly.

Other factors are that Chiefs have delved into the transfer market more actively than many other teams, which means many new faces, many of whom have arrived at different stages of the preseason and at varying levels of conditioning.

Plus, the new coach — returning for his second stint at the embattled Soweto giants — has to impose his philosophy, and bring the squad to a uniform level of tactical awareness of his game model.

Baxter was asked if it should be a surprise that Chiefs at times were patchy in their preseason Black Label Cup penalties win against Orlando Pirates and penalties MTN8 defeat to Mamelodi Sundowns.

“Not really. I think we’ve only really worked with this group since after the [Champions League] final,” the coach replied.

“So I think the players are further on than I thought they would be. And we’ll keep on pushing, of course.

“But this is not instant coffee, you know — we’ve got to make it.”

Chiefs’ signings showed glimpses of promise as they edged play in the Black Label. Amakhosi were poor going down 2-0 in the opening half of their cup quarterfinal against Sundowns.

The 2021-22 DStv Premiership kicks off on Friday evening with a tasty match-up between four-time successive champions Mamelodi Sundowns and last ...
Sport
8 months ago

They fought back admirably in the second half to 2-2 and the shoot-out, but even there Chiefs’ goals came against the run of play. Baxter was pleased at the answers he gained in the two games on his new-look squad, and the combinations he is formulating.

“Again, I think there’s been more than I really thought we would get. Because at times against Pirates, in the first half a bit, but mostly in the second half, our movement around the box was better, our possession was better,” he said.

“Not only on transitions but also in longer ones [build-ups] where we’ve got to pick our way through a bit.

“I thought against Sundowns we started poorly. I don’t think anybody was up to scratch.

“But then suddenly we kicked in and got back from 2-0 down — against Sundowns, and under a lot of pressure. We could have folded — so that was pleasing.

“So I wouldn’t say we’re anywhere near where I want to be, but I would say that ... let’s say the seeds have started to give some sprouts, I’ve not seen them in beautiful trees yet.”

Baxter, the last coach to win silverware at Amakhosi with league and cup doubles in 2012-13 and 2014-15, is tasked with ending the club’s unprecedented six seasons without silverware.

Mamelodi Sundowns started the defence of their DStv Premiership title on a winning note by edging a determined AmaZulu 1-0 at Loftus on Friday ...
Sport
8 months ago

Comparisons have been made in Stuart Baxter’s second stint as coach of Kaizer Chiefs to his first, though the coach admits this time around Amakhosi ...
Sport
8 months ago

The PSL is yet to finalise plans to bring back fans and all media at football stadiums, the league’s chair Irvin Khoza said on Tuesday.
Sport
9 months ago