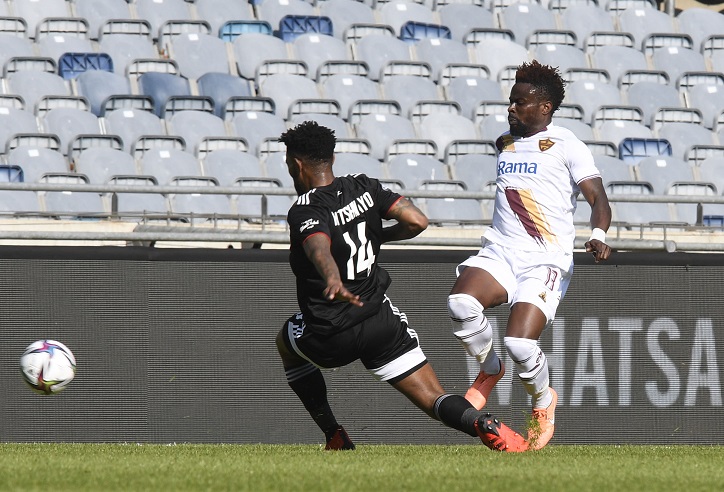 As Orlando Pirates embarked on life post-Josef Zinnbauer, being reduced to 10 men for most of their 2021-22 DStv Premiership opener against Stellenbosch FC meant Bucs had to tough out a 2-2 draw at Orlando Stadium.

In a game of swinging fortunes Waseem Isaacs’s deflected strike put Stellenbosch ahead in just the second minute. Deon Hotto’s expert free-kick in the 18th brought Bucs back, but Ntsikelelo Nyauza needlessly earned Pirates a red card in the 40th.

Goodman Mosele headed Pirates ahead in the 49th, this time Stellenbosch fighting back with substitute Judas Moseamedi’s strike in the 55th.

Pirates’ new caretaker-coaches Fadlu Davids and Mandla Ncikazi might have hoped for more in their first game. But there are few teams who put up quite so much fight over 90 minutes as Stellenbosch, and for a 10-man Bucs to earn a draw took all the Soweto giants’ effort.

Stellenbosch only ended 14th in 2020-21 because they spurned so many leads and chances in games they dominated. They are tough to beat in the character of coach Steve Barker, the 1990s no-prisoners midfielder for Wits University.

Bucs’ coach pairing always seemed unlikely to change much in their first match since Zinnbauer’s departure on Monday. If anything there was some similarity to the mild-mannered German’s innovations, with Deon Hotto deployed as a left-back, and Tebogo Tlolane ahead of the Namibian at left-wing, in a familiar 4-3-3 system.

The thinking seemed clear — Hotto’s surging runs out of defence would add a man in attack and open options for movement in the front line. Nyauza’s dismissal would have derailed much of that planning.

Stellenbosch got a break moments after the kickoff. They won the ball in midfield and surged forward, Junior Mendieta providing the touch to tee up Waseem Isaacs on the right outside the area.

The forward, recalled from last season’s loan in the second-tier with Cape Town All Stars, had a speculative crack that took a wicked deflection off the latterly worryingly off-colour Thulani Hlatshwayo to beat Richard Ofori at his top-right corner a minute and 22 seconds into the game.

For a second match running Bucs lifted themselves to strike back from an early setback. If there was plenty of luck involved in Stellies’ opening blow, Hotto’s free-kick which struck gorgeously past Lee Langeveldt at the top-right corner was pure class.

Pirates seemed to have pried the momentum back, as Tlolane ran into space on the left and fed Gabadinho Mhango to touch onto Kabelo Dlamini to force a save from Langeveldt.

But Nyauza’s rush of blood let Pirates down. Tussling with Ashley du Preez on the left at the goal line, the centreback unnecessarily elbowed then stomped on the striker, referee Thando Ndzandzeka left with an easy decision to flash red.

Bucs knew they had to get on the front foot from the break, despite the man’s disadvantage, as Vincent Pule replaced Dlamini.

They did that, earning an early corner. In a training ground set piece Mhango’s delivery was flicked on at the near post by Pule, midfielder Mosele burying the header at the far post.

Stellenbosch always have a fightback in them, and Barker has some performers in his squad. They struck back when fullback Deano van Rooyen chipped in from the right for Moseamedi to get in ahead of Hlatshwayo and head past Ofori.

It should not be a surprise that Kaizer Chiefs have started 2021-22 at times patchily, coach Stuart Baxter has said as his team prepare to kick off ...
Sport
10 months ago

Fadlu Davids has suggested there remains much untapped potential to unlock from Orlando Pirates’ players, saying he and co-caretaker coach Mandla ...
Sport
10 months ago