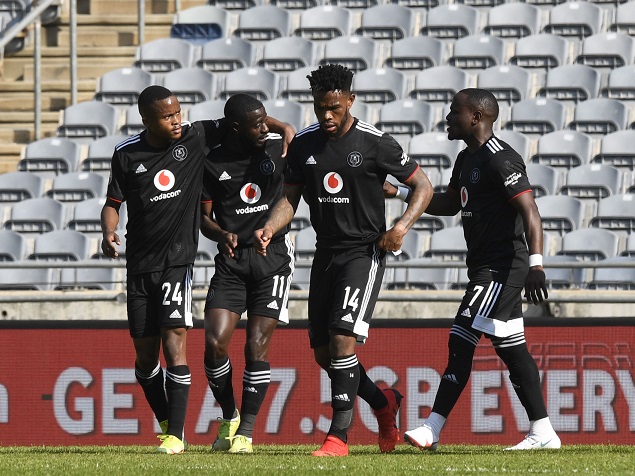 It might not have been the winning result Orlando Pirates’ caretaker-coaches Mandla Ncikazi and Fadlu Davids wanted in their first game, but there were signs of the fight and intensity they were seeking in their 2-2 draw against Stellenbosch FC.

Ncikazi said he was particularly impressed with Deon Hotto’s contribution from left-back and new signing Goodman Mosele’s man-of-the-match performance in midfield as Bucs fought for a result with 10 men in their 2021-22 DStv Premiership opener at Orlando Stadium on Saturday.

They conceded a deflected goal by Waseem Isaacs in just the second minute.

Pirates were surging back into the game, Hotto’s runs out of left-back giving them numbers and movement in attack, and the Namibian scoring a superb 18th minute free-kick equaliser.

But Ntsikelelo Nyauza’s 40th-minute red card for elbowing and stamping on Ashley du Preez derailed that gameplan and their attempt to impose themselves on Steve Barker’s tough Stellenbosch.

“He gives us a different dimension. But the club is so unfortunate right now where we have so many injuries.

“The depth and the wisdom of our team in having so many players allowed us to have these multifunctional players.

"You play Hotto as a striker in the previous match; play him wide, depending on the formation; and you can play him as a left-back.

“But today the plan was that Hotto must give us that width from deep. And it was working well until that unfortunate incident [with the red card].”

Mosele, the highly-rated 21-year-old signing from Baroka FC, scored in the 49th to give Pirates the lead, before substitute Judas Moseamedi headed Stellies level in the 55th.

“For a player coming from another club, getting a starting line-up, it was not only the goal, it was the performance, the ability to attach into our tactical discipline.

"And getting man-of-the-match, I’m really proud of him,” he said.

“And there is still more from him once he understands. But he’s a very good player and I’m very happy with the way he performed.”

The coach added: “But wait until we have our full complement back.

"I think there is more to come, without disrespecting the players who played today and all the commitment they showed.”

Ncikazi and Davids will feel they can have a decent chance of Bucs’ first win of the season in their league meeting against Marumo Gallants, 2-0 losers in Saturday’s Limpopo derby against Baroka, at Peter Mokaba Stadium on Tuesday.

It should not be a surprise that Kaizer Chiefs have started 2021-22 at times patchily, coach Stuart Baxter has said as his team prepare to kick off ...
Sport
10 months ago

As Orlando Pirates embarked on life after Josef Zinnbauer, being reduced to 10 men for most of their 2021-22 DStv Premiership opener against ...
Sport
10 months ago

Cape Town City and SuperSport United played to an uninspiring 0-0 draw at the Cape Town Stadium on Saturday evening.
Sport
10 months ago