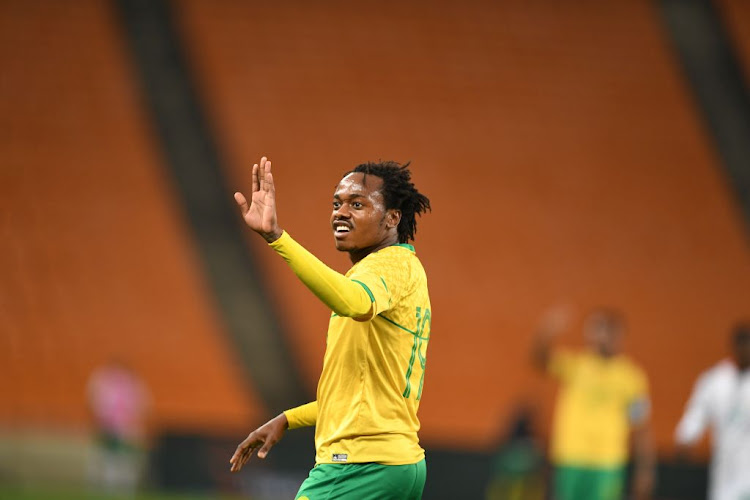 Bafana Bafana vice-captain Percy Tau: 'What is the point of me sitting in Brighton when I am not playing?'
Image: Lefty Shivambu/Gallo Images

Percy Tau has dismissed the views of those who have criticised his decision to leave English Premier League side Brighton & Hove Albion and move to Egyptian powerhouse Al Ahly.

Tau joined the North African side last week and the career switch led to numerous commentators and observers weighing in, with some cynics saying that the Bafana Bafana striker should have remained in England and fought for his place rather than join a side on the continent.

The Bafana star has been unsettled at Brighton and he revealed that he had several offers on the table, even from other sides in Europe. But he elected to reunite with coach Pitso Mosimane at Al Ahly and rekindle a relationship that saw the two win the Caf Champions League while at Mamelodi Sundowns in 2016.

“In most of the decisions, or rather in that decision process [the decision to join Al Ahly], most of the time I consider myself, I consider how I feel,” he said. “I know that I will always have the support of South Africans and I know that SA is a footballing nation. What is the point of me sitting [in Brighton] when I am not playing? Everybody wants to see me play, I want to see myself play and my family wants to see me play.

“But I have made such moves before. I went from Witbank Spurs to the academy of Mamelodi Sundowns when I was 17 years old. I went back to Spurs on loan. I [eventually] got to Brighton, though there was uncertainty regarding that move.

“I went to Union on loan [Belgian club Royal Union Saint-Gilloise], I went to Club Brugge, so it is part of my career to move around. So someone feels 'if you stay here you will be OK'. But I feel at that moment you do not know what I am going through. You are at home and sitting, while I am going through something that I feel would be better if I move.”

The 27-year-old Tau, who was signed by Brighton from Sundowns in July 2018, struggled to break into manager Graham Potter’s XI in England. While he set the scene alight during his numerous loan spells, he found himself dropping down the pecking order in England with each passing day.

He did not take too kindly to the views of those who feel that he has taken a step backwards in his career by leaving Europe to join Al Ahly.

“Look, the move made more sense to me than staying in Europe,” he continued. “Of course there were offers in Europe, I considered them, considered my age and all the other factors that I have not disclosed to you guys [the media].

“It is about time because I also love to win games. I cannot wait to get started.”

Tau was named as the Bafana vice-captain on Monday and will be deputy to SuperSport United goalkeeper Ronwen Williams.

Bafana coach Hugo Broos announced the decision at Dobsonville Stadium in Soweto, where the team had its first training session on Monday afternoon ahead of the crucial back-to-back 2022 World Cup qualifiers against Zimbabwe and Ghana in the coming days.

Broos said he could not have asked for better candidates and expects the two players to lead Bafana both on and off the pitch.

Williams and Tau will have to hit the ground running as Bafana travel to Zimbabwe on Wednesday to face their neighbours in the crunch match on Friday. They will then return to SA to host Ghana on Monday.

Do you approve of Percy Tau's move to Al Ahly?

Premier Soccer League club Maritzburg United has divided its hometown, causing an uproar with a R27m request for funding from the city that was ...
News
11 months ago

Lionel Messi came on as a second-half substitute to make his debut with Paris St Germain in a Ligue 1 game against Stade de Reims at the Auguste ...
Sport
11 months ago

Liverpool manager Juergen Klopp said the red card given to Chelsea's Reece James, in Saturday's 1-1 draw, had taken away the chance to see a ...
Sport
11 months ago

Argentina said on Sunday Aston Villa's Emiliano Martinez and Emiliano Buendia were available for all three of their September World Cup qualifiers, ...
Sport
11 months ago

Wayne Rooney says Cristiano Ronaldo should be played as a striker

Manchester United should play Cristiano Ronaldo as a striker if they are to get the best out of the 36-year-old, who has returned to the Premier ...
Sport
11 months ago