Broos on his Bafana young guns: 'I want to build a team for years to come' 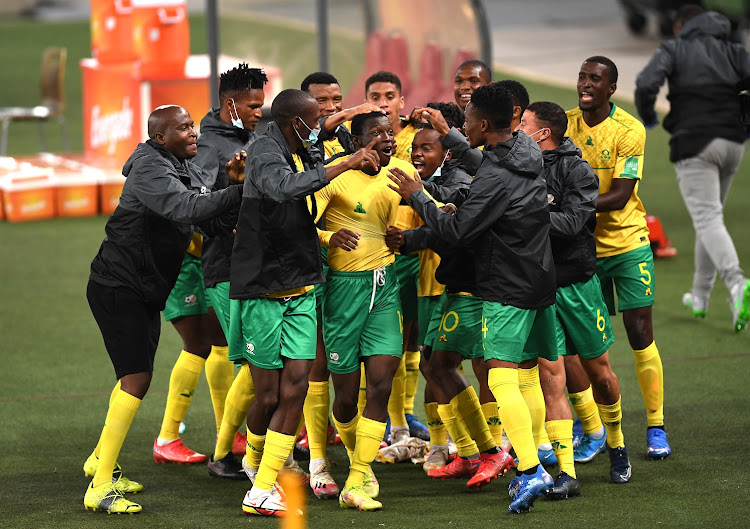 Bongokuhle Hlongwane is surrounded by his teammates after scoring Bafana Bafana's winning goal in their 2022 Fifa World Cup qualifier against Ghana at FNB Stadium on September 6, 2021.
Image: Lefty Shivambu/Gallo Images

Hugo Broos wants to build a team that can last for years, the Bafana Bafana coach said after the first two matches of his brave new rebuilding era started with a 2022 World Cup qualifying draw against Zimbabwe and win against Ghana.

SA football supporters will say they have heard for years that Bafana are “rebuilding”, and they will have a point. But never before has a new SA coach come in with as bold an emphasis on introducing youth.

The closest any previous Bafana head coach came was when Shakes Mashaba qualified for the 2015 Africa Cup of Nations with a number of SA Under-20 internationals called into his squad.

But even Mashaba only fielded a few of those youngsters in competitive qualifiers — notably Rivaldo Coetzee. And he did not leave out big-name players the way Broos did for his first two matches, including captain Thulani Hlatshwayo and midfield stars Themba Zwane and Bongani Zungu.

It was one of the young inclusions who finally produced SA’s 83rd-minute breakthrough strike after they dominated possession — though not necessarily clear-cut chances — against a weakened Ghana at FNB Stadium on Monday night.

Bongokuhle Hlongwane now has two goals in his three senior national appearances. The 21-year-old Maritzburg United striking prospect had scored on debut in the 3-2 friendly win against Uganda at FNB in June, where assistant Helman Mkhalele took charge as Broos concluded affairs in Belgium.

Most previous Bafana coaches would not even have played Hlongwane in a competitive match, let alone two World Cup qualifiers, establishing one of the youngest striking partnerships seen for Bafana with Baroka FC’s also 21-year-old Evidence Makgopa.

“You know some day you have to give them the chance,” Broos said of his youth policy after the Ghana win.

“Yeah, you hear coaches say, ‘But they are not experienced’. When is a young boy going to be experienced when he doesn’t play?

“So one day you have to give him a chance, and I will do that here from the first day when I’m here in SA — give the young players a chance, and it’s up to them to take those chances.

“If I can take the example of Ethan Brooks — he played a very good game tonight, so he took his chance.

“And in the next few months other young players will get their chance. And then, if that succeeds, then you can build a team for years.

Bafana Bafana made heavy weather of disposing of Ghana and needed a late lone strike from Bongukuhle Hlongwane to finally ease past the West Africans ...
Sport
9 months ago

“And this is something that I would like to do in SA. So, up to now, I think we can be very happy with the young boys.”

TS Galaxy central midfielder Brooks, 20, was included having shone for the developmental Bafana who won the Cosafa Cup in Gqeberha in July, as was Mamelodi Sundowns’ central defensive prospect Rushine de Reuck, 25, who started both the past week’s World Cup qualifiers.

Bafana’s 0-0 draw against Zimbabwe in Harare on Friday and win against Ghana leave them top of Qatar 2022’s Confederation of African Football (Caf) qualifying Group A on four points to the Black Stars’ three.

Broos has cautioned his new-look combination may well not qualify for the next World Cup, and their bright start has not altered that, given a tough playoff round that awaits even should they win Group A, which in itself remains distant prospect.

But the beginnings of Broos’s rebuilding project have had a bright start that will have surprised many. It’s all a breath of fresh air from a national team whose 15 years of underachievement have left most SA football supporters despairing of any chance of an improvement.

"We are Bafana Bafana, bring on Europe," wrote one fan hilariously.
Sport
9 months ago

Bafana Bafana intend to take the fight to Ghana when they host the West Africans in a crucial 2022 World Cup qualifier at FNB Stadium on Monday.
Sport
9 months ago

Bafana Bafana striker Percy Tau expects Ghana to have their tails up when the West Africans visit FNB Stadium in a 2022 World Cup qualifier on Monday ...
Sport
9 months ago