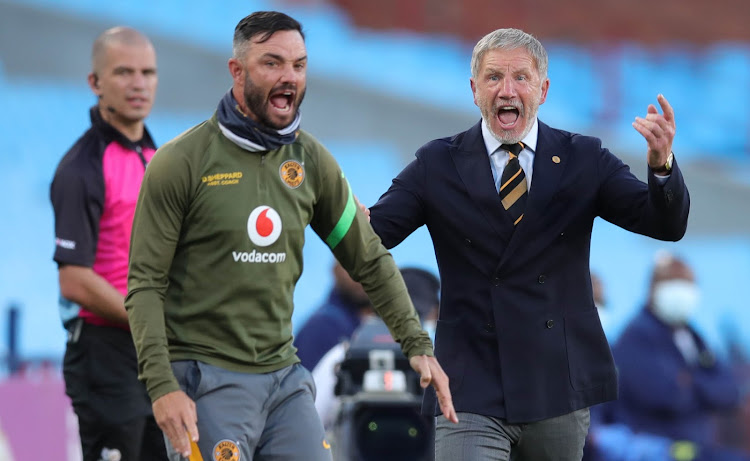 Kaizer Chiefs fans were left with serious chestpains on Sunday after their side suffered a 2-0 defeat to Mamelodi Sundowns at Loftus in Pretoria.

Any thoughts that Sundown' off the field coaching drama would spill onto the pitch were forgotten when Grant Kekana rose to beat Chiefs goalkeeper Bruce Bvuma with a fine header after just seven minutes.

Chiefs pushed hard but couldn't find the equaliser. Instead Peter Shalulile popped up for a simple tap-in from substitute Neo Maema in the 62nd minute.

Chief had the chance to pull one back 11 minutes from time when they were given a penalty, but Lebogang Manyama hit the cross bar with goalkeeper Denis Onyango well beaten.

Chiefs will be hoping for better luck when they face Royal AM at FNB Stadium on Saturday.

Meanwhile, Sundowns co-coach Rulani Mokwena shrugged off questions about the tension on the club's bench after earlier reports in SoccerLaduma alleged Manqoba Mngqithi had made remarks that undermined Mokwena at a training session when his co-coach was not present.

Mokwena confirmed Mngqithi had apologised for the incident.

“The elephant is out of the room, old news. We move on. The talking is on the pitch and I think the players did the talking. Top performance. In fact, I have to single out Denis Onyango,” Mokwena said in a television interview after the match.

On social media, Chiefs fans were deep in their feels and turned to the TL to share their heartbreak.

While some called for Arthur Zwane to take over the team, others held hope things would get better for Amakhosi.

They should have let Arthur zwane lead the team💔😭#Amakhosi4Life pic.twitter.com/JcQW2v2ToE

Wait until this one embarrasses Chiefs in the next game 🥴😒 pic.twitter.com/dUbpi2xYKf

We have signed quality players. We have a wrong coach🙄🙄 #Amakhosi4Life pic.twitter.com/fF1Glm8pAQ

Off-the-field tension on the Mamelodi Sundowns bench dominated the build up to their high-profile league showdown against Kaizer Chiefs, but the ...
Sport
8 months ago

Mamelodi Sundowns co-coach Rulani Mokwena has admitted to "an element of truth" to a disagreement between the club's coaching trio that was the ...
Sport
8 months ago

Both team's coaches agree that a win for Mamelodi Sundowns or Kaizer Chiefs in their DStv Premiership clash at Loftus Versfeld on Sunday is a “a ...
Sport
8 months ago