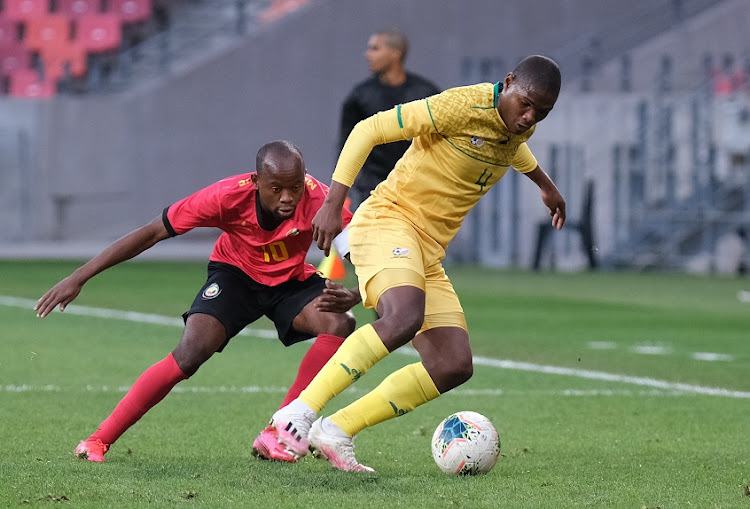 Njabulo Ngcobo of A is challenged by Nilton Ernesto of Mozambique in the Cosafa Cup semifinal at Nelson Mandela Bay Stadium in Gqeberha on July 16 2021.
Image: Michael Sheehan/Gallo Images

Ngcobo played 29 matches for Swallows in all competitions last season, where he was named defender of the season before he moved to Naurena, but he is yet to play for Amakhosi under Baxter this season.

In the four matches Chiefs have played this season in all competitions, in which they conceded five goals, Baxter has preferred the central defensive partnership of Eric Mathoho and Daniel Cardoso.

However, Rabutla said 27-year-old Ngcobo deserves an opportunity to show what he can do because he is good enough to play ahead of either Mathoho or Cardoso.

“The situation Ngcobo finds himself in at the moment at Chiefs is definitely not good for the player,” said Rabutla who played for Bafana during the 1998 Africa Cup of Nations in Burkina Faso.

“I watched Chiefs’ match against Sundowns at the weekend and there were a few incidents where Mathoho was caught in one-on-one situations with attackers threatening them in the box.

“I am not saying Mathoho is the one who must be sacrificed for Ngcobo but what I am saying is that if it was Ngcobo, he was possibly going to handle those situations better.”

Rabutla believes Ngcobo will add value to Chiefs because he is a good player who is also hungry.

“I watched him closely at Swallows last season and I know he is a very good defender who will surely add value if he is given an opportunity to play.

“I think they signed him because he is a good player and he must be itching to get on the field and show what he can do for a big club like Chiefs, and also continue impressing national coach Hugo Broos.

“He is good enough and he will definitely challenge the guys who are there if he is given an opportunity. The coach must play him because we also need him for Bafana Bafana.

“How can you not play a player who played almost all the matches for Swallows last season? I don’t understand it. He has all the qualities of a defender because he is good in the air, he is quick, he is a man marker, he produces clean tackles and he can handle all the situations required of a defender.”