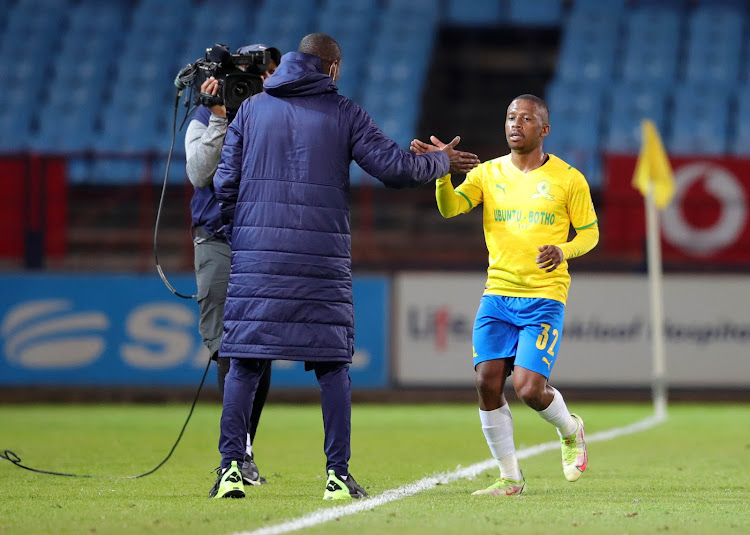 Mamelodi Sundowns co-coach Rulani Mokwena celebrates with Thabiso Kutumela after the striker scored his first goal for the champions during a DStv Premiership match at home against TS Galaxy on September 19 2021 at Loftus.
Image: ©Samuel Shivambu/BackpagePix

After a tepid first half where Galaxy showed resilience and solid defensive organisation at Loftus, centre-back Mosa Lebusa and Namibian hitman Peter Shalulile struck twice in two minutes to deflate their visitors.

Kutumela came off the bench and opened his Sundowns account with six minutes remaining to put the final nail in Galaxy’s coffin.

Sundowns may have only scored six goals in their opening four matches but they have been stingy at the back and remain the only team in the Premiership yet to concede a goal.

Supersport United barely raised a sweat as they made light work of a hapless Swallows FC to win this Dstv premiership match comfortably at ...
Sport
8 months ago

Sundowns have won three and drawn one in the league to sit pretty at the top with 10 points, two more ahead of SuperSport United, Stellenbosch, Orlando Pirates, who all won their matches at the weekend.

With Galaxy resolute in defence and looking to further frustrate their more illustrious hosts after the half time break, Galaxy’s Bosnian keeper Vasilije Kolak failed to deal with a Lyle Lakay free kick, which bounced just in front of him.

The European goalkeeper did well to make the save but he only parried the ball not far from his goal and allowed Lebusa to pounce with his stronger left foot and slam home the opening goal from the far post.

Shalulile beat the visitors’ offside trap a minute later and put the ball past Kolak with a deft touch for his second Premiership goal of the season.

'We showed why we finished second,' says McCarthy after AmaZulu advance in Caf Champions League

Benni McCarthy said AmaZulu showed the same character that saw them finish as Premiership runners-up after Usuthu beat Nyasa Big Bullets 3-1 in the ...
Sport
8 months ago

If Galaxy had slim chances of a late comeback, those hopes went up in smoke when Kutumela, who came on as a substitute in place of Gaston Sirino, showed composure inside the box and ended the match as a contest after.

Sirino looked disorientated, lost too many balls and was guilty of having a go at goal when laying off the ball to a teammate looked to have been the right option.

Sundowns holding midfielder Rivaldo Coetzee put in yet another solid shift and was awarded the player of the match despite limping off late in the match and was replaced by Hashim Domingo, who combined with fellow substitute Kutumela for the third goal.

It is Coetzee's third player of the match award in four Premiership matches for the Bafana Bafana utility player.

Sundowns have already had the scalps of AmaZulu, Kaizer Chiefs and drew with Chippa United and the win over Galaxy will have the team buzzing ahead of their clash against Orlando Pirates in Soweto on Saturday.

As Kaizer Chiefs' humiliation at the hand of Royal AM in their own FNB Stadium backyard continues to reverberate through SA football, the newcomers' ...
Sport
8 months ago

Poor decisions and costly errors in moments of the game cost Kaizer Chiefs dearly in their 4-1 DStv Premiership humbling to Royal AM at FNB Stadium ...
Sport
8 months ago

What seemed a bright start for Stuart Baxter's second era at Kaizer Chiefs has quickly deviated into the territory of loose and muddy, as fired-up ...
Sport
8 months ago