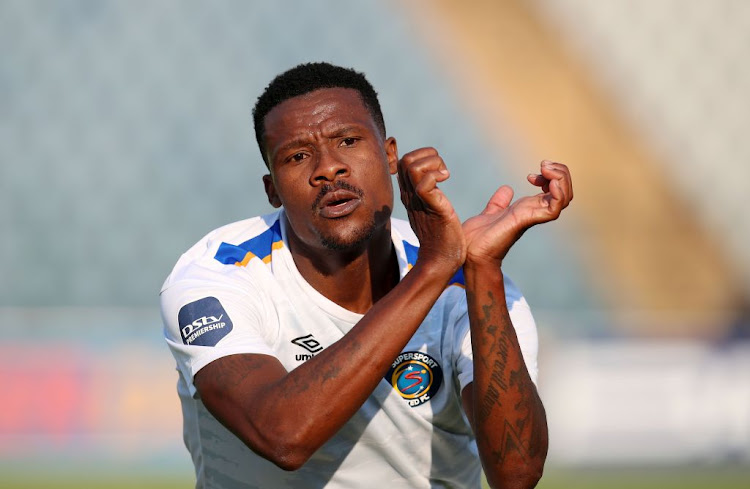 Supersport United barely raised a sweat as they made light work of a hapless Swallows FC to win this Dstv premiership match comfortably at Dobsonville stadium on Sunday afternoon.

The Pretoria visitors never needed to shift into higher gears and the two penalties they earned in the second half effectively clipped the flightless Birds' wings in the 3-0 victory.

After a rather tight and goalless first half, the game suddenly opened up in the second period when referee Tshidiso Mkhwanazi awarded a penalty to the visitors in the 59th minute.

The irrepressible Teboho Mokoena delivered what had appeared to be a innocuous-looking low shot but after Sipho Sibiya handled the ball inside the area, assistant referee Tshepo Nojila immediately waved his flag and signalled to Mkhwanazi.

And after a quick consultation between the two officials, the referee pointed to the penalty spot.

Sibiya earned a yellow card for his trouble and also had the displeasure of watching Jamie Webber beat Swallows goalkeeper Virgil Vries with a well-taken penalty to open the scoring in the 61st minute.

Mokoena returned to haunt the home side moments later when he won the ball back from Swallows and after picking out a lurking Webber as he ran into the area, the midfielder struck his shot first time towards goal. A diving Vries made the save but the ball rolled kindly towards Mokoena, who made no mistake and punished the home side in the 62nd minute.

Sibiya was having a torrid afternoon in the Swallows rearguard and conceded another penalty in the 70th minute that effectively put the game out of the home side's reach.

Referee Mkhwanazi ruled the defender to have brought down a speeding Webber inside the area and immediately pointed to the spot.

A grateful Thamsanqa Gabuza stepped up to score his second goal of the season and wrap up all the points for the Pretoria side.

There were very few chances during a pedestrian first half that saw both sides cancelling each other out rather than trying to break the deadlock.

The visitors had the first clear-cut chance of the opening period when Iqraam Rayners unleashed a curling shot from outside the area, but goalkeeper Vries was equal to the task and parried the ball to safety in the 13th minute.

Swallows had chances of their own and should have given United goalkeeper Ronwen Williams plenty to think about when Matlala Makgalwa suddenly broke free unmarked after a long-range shot from inside their own half.

Williams was caught in no man's land and Makgalwa even had the option of rolling the ball to Kagiso Malinga as the United goalie desperately tried to close the space.

But Makgalwa inexplicably tripped on his own feet just metres from the goal line and United were able to recover and clear the danger in the 28th minute. It was a bizarre moment and Malinga could hardly believe his eyes as a gutted Makgalwa buried his head in the Dobsonville turf as the opportunity slipped through their fingers.

As Kaizer Chiefs' humiliation at the hand of Royal AM in their own FNB Stadium backyard continues to reverberate through SA football, the newcomers' ...
Sport
8 months ago

Bucs downs Chippa in an exciting second half finish in Gqeberha

Poor decisions and costly errors in moments of the game cost Kaizer Chiefs dearly in their 4-1 DStv Premiership humbling to Royal AM at FNB Stadium ...
Sport
8 months ago