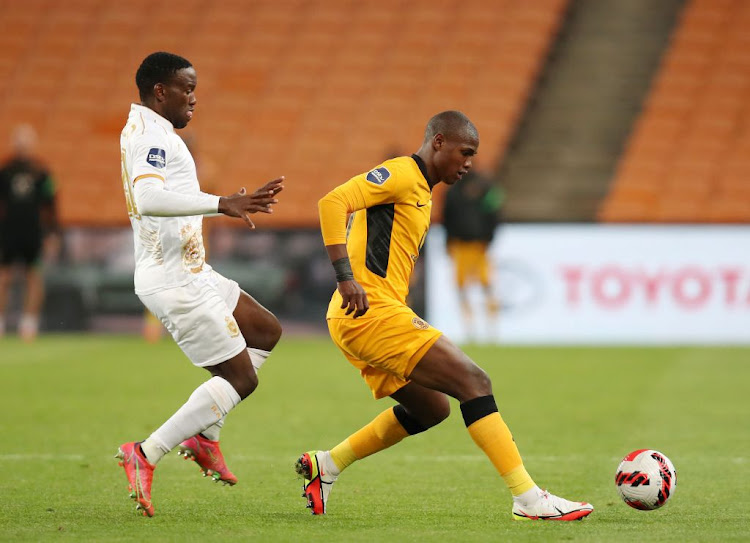 Njabulo Ngcobo of Kaizer Chiefs shields the ball from Victor Letsoalo of Royal AM during the DStv Premiership match at FNB Stadium on September 18 2021 in Johannesburg
Image: Muzi Ntombela/BackpagePix/Gallo Images

Kaizer Chiefs coach Stuart Baxter has said the noise from supporters and the media questioning Njabulo's Ngcobo's absence from the starting XI at the start of 2021-22 does not help the player.

After being grilled in the week about some of his eyebrow-raising selections — especially new signing from Swallows FC Ngcobo's absence — Baxter handed a debut to the 2020-21 PSL defender of the season in Saturday's 4-1 DStv Premiership humbling to Royal AM at FNB Stadium.

The coach stressed he had not capitulated to the pressure, but said Ngcobo fitted into his plans for the game.

"But the same as every player, I think the screaming at the [coaches] about, 'Push him in, push him in', doesn't help him and doesn't help anybody.

"I gave him a game because I thought it was the right game for him to go in. I wanted him to drive forward with the ball and dominate a bit on his side because of the way Royal play.

"It's his first game, I thought he did OK, but he can do a lot better."

Another debutant as Baxter seeks answers between the posts of who among his four strong goalkeeping options to field was Brandon Petersen.

Baxter said the ex-Bidvest Wits keeper, who had a promising unofficial debut in the preseason Black Label Cup against Orlando Pirates, could not be faulted in the four goals conceded, which were more down to a poor defensive display by Chiefs.

"Brandon, I think we hung out to dry a bit whenever he was brought into the game," the coach said.

"I thought his distribution and calmness were quite good. But whenever he had to make a save it was a last-ditch save. So I don't think it was a very easy game for Brandon in that respect."

Baxter has a week to work on his team's shape and balance before meeting Marumo Gallants next at Peter Mokaba Stadium in Polokwane on Sunday.