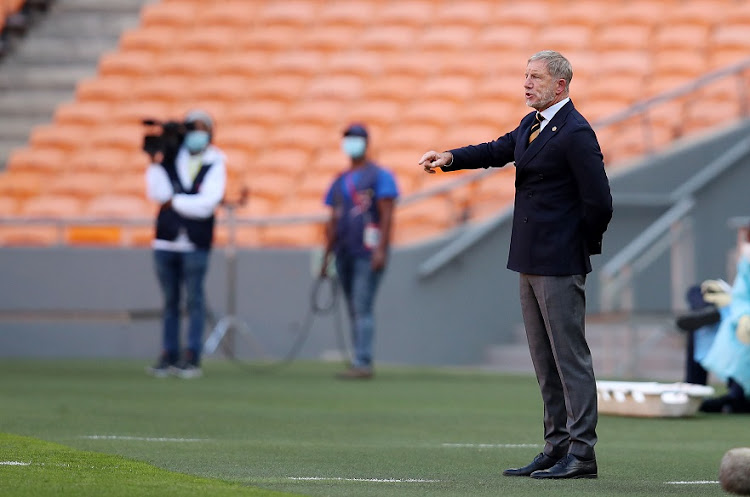 Kaizer Chiefs have had problems with their spacing and allowing players to score at the far post, and their three centre-backs were aimed at rectifying that, coach Stuart Baxter has said in explaining his 3-4-3 formation of the past two games.

Baxter said that, ultimately, whatever the formation, it is about finding the right balance across the field. That balance clearly was not found when Chiefs capitulated to a 4-1 DStv Premiership humbling to Royal AM at FNB Stadium on Saturday, the coach conceded.

Chiefs' 4-4-1-1 — with Keagan Dolly and Samir Nurković innovatively employed as a left-footed player on the right and vice versa, cutting into the pockets, and wingbacks Njabulo Blom and Sifiso Hlanti providing the width on the overlap, was highly effective in a 2-1 win against Baroka FC before the Fifa break.

The 3-4-3 — with Daniel Cardoso and Erick Mathoho partnering first Thabani Dube then Njabulo Ngcobo as the three centrebacks — has been employed in two defeats, a 2-0 loss to Mamelodi Sundowns in Pretoria where Chiefs missed chances, and the Royal debacle.

Baxter was asked to explain thinking behind the formation.

“Against Baroka in the last 15 minutes, and even against Sundowns, we conceded goals by people changing play from one side to the other, and our distances were a bit wrong. And they ended up crossing, and we ended up with a man short in the centre,” the coach said.

“We gave up goals like that, despite playing well apart from that. If you remember the [first] goal against Sundowns, and goal against Baroka from the set play [by Denwin Farmer], it was at the far post.

Watch how MaMkhize and her team broke it down during their win over Kaizer Chiefs.
Sport
3 months ago

“We're having that problem with our distances. So our idea there was to go with three centrebacks and we could tuck that wingback around and kill that space.

“It has worked but we've still conceded goals in poor situations for us. The 3-4-3 with the two wingbacks getting high and wide when we've had the ball has helped us a lot. We've scored and had joy with it.

“But the question is can we defend as well with the four as we can with the three-plus-two?

“Because the front players play almost exactly the same. We have a “9" [Billiat] and two pocket players [Dolly and Nurkovic] and the two centre-midfield players [Cole Alexander and Phathutshedzo Nange].

“That's almost exactly the same. We either take that centreback and make him into a centre-midfield player who drops in-between the centrebacks [when Chiefs don't have the ball], or you have three centrebacks.

“It's about finding balance — and the balance was obviously wrong [against Baroka].”

Baxter has this week, ahead of Amakhosi’s next assignment against Marumo Gallants at Peter Mokaba Stadium on Sunday, in which to find solutions to the many questions posed by the heavy defeat to Royal.

Kaizer Chiefs coach Stuart Baxter has said the noise from supporters and the media questioning Njabulo's Ngcobo's absence from the starting XI at ...
Sport
3 months ago

Poor decisions and costly errors in moments of the game cost Kaizer Chiefs dearly in their 4-1 DStv Premiership humbling to Royal AM at FNB Stadium ...
Sport
3 months ago

Give Baxter more time to get Chiefs right, say ex-players

What seemed a bright start for Stuart Baxter's second era at Kaizer Chiefs has quickly deviated into the territory of loose and muddy, as fired-up ...
Sport
4 months ago