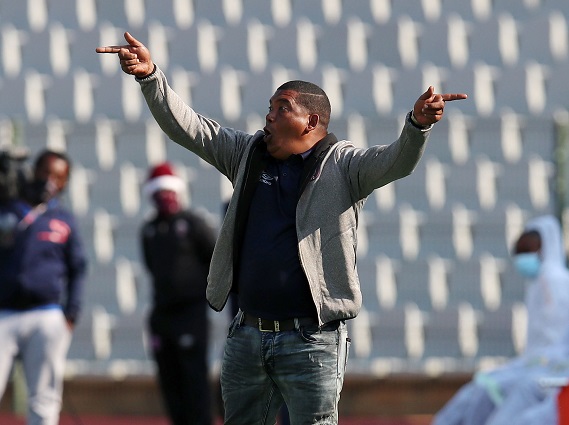 Swallows FC chair David Mogashoa has confirmed the club’s head coach Brandon Truter is on leave, but said “the coach is definitely coming back”.

His assurance seems unlikely to quell furious speculation that Truter is on his way out of the Birds following successive defeats, both in the DStv Premiership to Orlando Pirates (1-0) and Sunday’s 3-0 turnaround against SuperSport United at Dobsonville Stadium.

On Tuesday morning Mogashoa at first declined to answer any questions regarding Truter.

However, pressed to provide clarity in response to reports that Truter had left the club, and others that the coach had been put on special leave, Mogashoa was adamant the Swallows boss is simply “on leave” and will return to his post.

“He is on leave, but he’s not fired,” Mogashoa said.

Mogashoa was asked if Truter is on leave for a personal reason, or whether it was because of a club issue.

“No, he’s on leave and that’s it,” the Birds’ chairman said.

Asked if the club might put out a press statement to clarify Truter’s situation, Mogashoa responded: “We are not going to release a statement because the coach is coming back.

“It’s not like he’s gone forever. The coach is definitely coming back.”

Truter was at the helm of Swallows’ promotion back to the Premier League as champions of the 2019-20 National First Division.

The Birds made a healthy return to the top flight, ending sixth and suffering only two defeats. But a bright start gave way to a string of draws, Swallows ending with 20 stalemates in their 30 matches.

Truter’s team appeared to make a better start to 2021-22, beating Orlando Pirates (2-1) in the MTN8 opening round and winning their first Premiership match 1-0 against Royal AM. They then drew (both 0-0) against AmaZulu in the league and Cape Town City in the their MTN8 semifinal first leg, before the league defeats to Pirates and SuperSport.

Swallows have only won four times in their last 27 league and cup matches.

Supersport United barely raised a sweat as they made light work of a hapless Swallows FC to win this Dstv premiership match comfortably at ...
Sport
2 months ago

Kaizer Chiefs coach Stuart Baxter has said the noise from supporters and the media questioning Njabulo's Ngcobo's absence from the starting XI at ...
Sport
2 months ago

Bafana Bafana coach Hugo Broos has beefed up the Orlando Pirates contingent in his preliminary squad for next month’s crucial 2022 World Cup ...
Sport
2 months ago

Swallows FC coach Brandon Truter was disappointed in how his attack did not function, and said Orlando Pirates were the hungrier team for their 1-0 ...
Sport
2 months ago