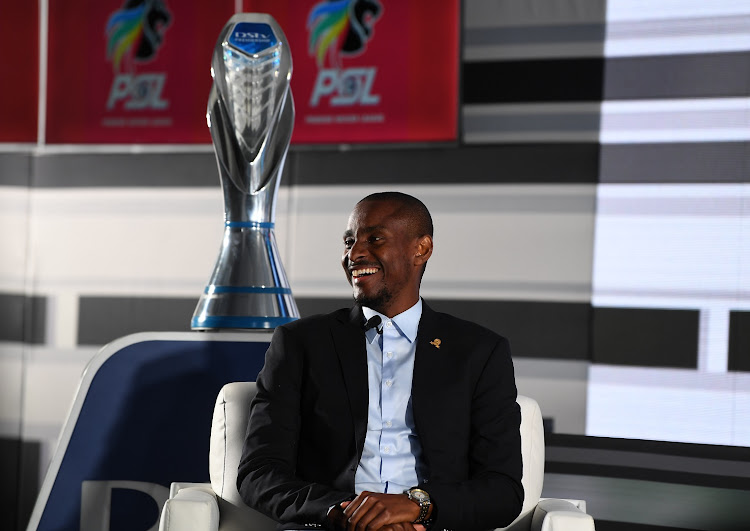 Mamelodi Sundowns co-head coach Rulani Mokwena has cautioned that the champions are not looking too far ahead of themselves.
Image: Lefty Shivambu/Gallo Images

Rulani Mokwena has played down Mamelodi Sundowns' early season signs of dominance and said the champions are not looking too far ahead of themselves ahead of their mouth-watering clash against Orlando Pirates in Soweto on Saturday.

Mokwena said this despite early dominance from a side bidding for what would be an unprecedented fifth DStv Premiership title in a row and 11th overall since the Premier Soccer League's inception in 1996.

Sundowns lost just one match and conceded 14 goals in 30 matches as they dominated their way to an 11th Premiership title last season. The champions are yet to concede a goal and have collected 10 out of a possible 12 points this season.

They have won three times and drawn once in their opening league matches to prompt debates that Sundowns will again sweep all before them in 2021-22.

Sundowns have easily been SA's dominant club with four Premiership titles and Caf Champions League (2016) and Caf Super League (2017) gold medals in the past five years.

Mokwena did not disagree with the suggestion that perhaps the Champions League stage, where Sundowns have fallen at the semi-final stages in recent years, is where the Brazillians will be most tested in the current campaign.

“Of course the Champions League is the playground and natural habitat for Mamelodi Sundowns,” said Mokwena after the club overwhelmed TS Galaxy 3-0 at Loftus on Sunday to go top of the log.

“Sundowns is a big club and the Champions League is a stage for big clubs.

“That is the level we want to be in, but the reality is that football is such a difficult sport that if you get too far ahead of yourself you are going to have a lot of problems.

“We work match by match, day by day and we want to win every single match.

"This means we have got to win every single day. Every training session must be a win and every rest day must be a win.

"We believe those are indispensable training sessions where the nutrition needs to be right, the rest of the players need to be right and we have to win.

“By winning every single day, it then puts us in a position to win on match days.

“The amount of work done by the technical team with regards to planning training sessions, planning for a specific opponent, planning to review the previous performance and making sure we do our corrections.”

Barring a tepid first half, Sundowns hardly put a foot wrong as they dispatched Galaxy.

Ahead of their trip to Orlando Stadium on Saturday, Mokwena said Downs will watch the video of their match against Galaxy to see where improvements are needed.

“We analyse the weaknesses and strengths of the opposition and the amount of time it takes to prepare for a match also does not allow us to get ahead of ourselves.

“We go step by step, match by match, competition by competition and without even thinking too much about the Champions League.

"Of course we have one eye on it and we know where we are going for the qualifying round, but our focus is 150% on Orlando Pirates now.

“We rest and recoup and regenerate, analyse the game [against Galaxy] and try to find the areas where we have to improve.

"And we are going to improve, but at the same time we also know we can’t get too far ahead of ourselves.”

Sundowns will confront a Pirates team who have amassed eight points from their two wins and two draws in the opening four matches.

“Pirates is a club built on respect, family values and humility,” said Mokwena, who had a brief stint as Bucs' interim coach the season before last.

“You demonstrate those by paying attention even to the smallest of details by showing a lot of humility every day and working hard, and that is what we focus on.

“So, without getting too far ahead of ourselves, the next match is the most important one for us.”

Swallows FC chair David Mogashoa has confirmed the club’s head coach Brandon Truter is on leave, but said “the coach is definitely coming back”.
Sport
3 months ago

Lyle Lakay should be in the national squad for the crucial back-to-back 2022 World Cup qualifiers against Ethiopia in October if the Bafana Bafana ...
Sport
3 months ago

Bafana Bafana coach Hugo Broos has beefed up the Orlando Pirates contingent in his preliminary squad for next month’s crucial 2022 World Cup ...
Sport
3 months ago

AmaZulu playmaker Luvuyo Memela says the team is capable of scoring goals and is hoping they will prove their hunger to find the back of the net when ...
Sport
3 months ago

Strengthening the club's support base, development and the women's team are the low-hanging fruit Mamelodi Sundowns' new young chairman Tlhopie ...
Sport
3 months ago

Marumo Gallants only have one point after they lost and drew their opening two Premiership matches to lie rock bottom, but coach Sébastien Migné is ...
Sport
3 months ago

Chelsea defender Marcos Alonso has stopped taking the knee before matches this season because the anti-racism gesture is “losing a bit of strength“, ...
Sport
3 months ago

The Mamelodi Sundowns defence has not been breached in four premiership encounters in the new season and co-coach Rulani Mokwena has explained how ...
Sport
3 months ago