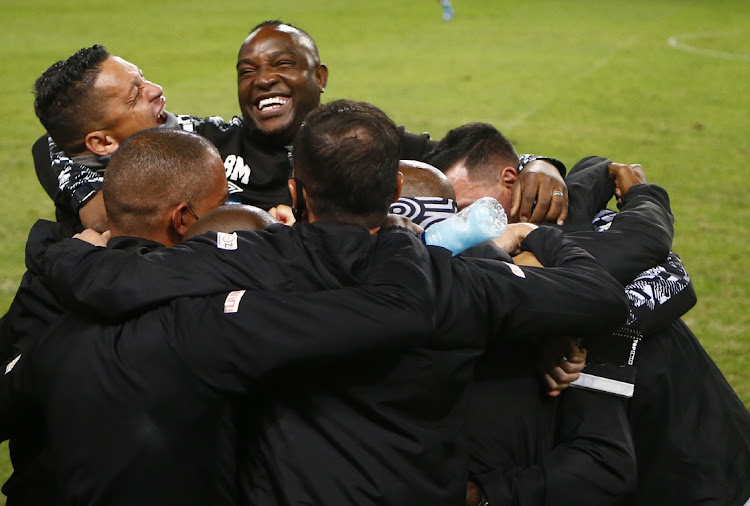 Benni McCarthy is happy that his team managed to score two goals against Lamontville Golden Arrows in a DStv Premiership match on Wednesday.
Image: BackpagePix

AmaZulu coach Benni McCarthy believes his team are close to achieving their maiden win of the season after they managed to find the back of the net for the first time in four league matches in the 2-2 draw against Durban neighbours Lamontville Golden Arrows on Wednesday.

McCarthy was frustrated to see his side not scoring in the previous league matches against champions Mamelodi Sundowns (1-0 loss), SuperSport United (0-0) and Swallows FC (0-0).

But after Xola Mlambo and Bongi Ntuli scored Usuthu’s goals in Wednesday’s match, the former Bafana striker said he was now confident of collecting full points against Baroka FC at home on Saturday.

“I think it was a missed opportunity for us,” McCarthy said of their result against Abafana Bes’thende at the Sugar Ray Xulu Stadium.

Usuthu earned the point with Ntuli’s late penalty after they had failed to hold on to their early lead, allowing Knox Mutizwa to equalise from the penalty spot before substitute Matome Mathiane gave Arrows the lead in the 77th minute.

“We played extremely well and we started the game really good. High tempo, good chances that we created and we hit the target. We looked like a team that was always going to score,” said McCarthy.

“Unfortunately the [Arrows’ Sifiso Mlungwana] keeper for us had one of those days where every shot and every ball seem to just fall perfectly, exactly in his position and he was able to block the ball from even going further ahead.

“But I really liked what I saw from the team, work ethic and mentality. Sometimes when we had our backs against the wall but we never gave up and we continued to dig in there and we turned the game around.

Benni McCarthy’s AmaZulu remain without victory in the DStv Premiership after playing a 2-2 draw in the KwaZulu-Natal derby against neighbours ...
Sport
7 months ago

“I can’t really complain or moan too much about getting a point because it's a point against a team that started really well. We’re not playing the football that we did (last season) and we get disappointed from getting nothing from the games. Getting one point is better than getting a loss on our name.”

But McCarthy said it was pleasing to see his players getting on the score sheet.

“Getting two goals is exciting and that’s again very positive,” he said.

“It’s very positive signs that we’re moving in the right direction and the team is slowly getting there. Hopefully when it comes to the latter stages we’ll be in good form and we can build from this game.

“The next game coming up is Baroka and if we can get a win there, it will just set us up because we’ve got three points on the log and still hovering at the bottom of the league.

“But if we get a win against the next opponent on Saturday, then you jump to six points and you jump in to the top half. That’s where we belong and that’s where we’re planning to get to.”

McCarthy added that at the moment he can’t risk playing all the new players in the team because they have to get used to how they play.

“Listen, it’s been a tough start and we got all the tough teams. It’s not easy and you can’t gamble, rotate and risk playing players that still having to adapt and settle into the way we play.

“We go with what we know and what’s worked for us, and then slowly integrate the new boys,” said McCarthy, who still has influential attacker Augustine Mulenga sidelined by an injury.

Rulani Mokwena has said Mamelodi Sundowns perfect defence record in the Premiership so far is largely due to a modern tactical theory called “rest ...
Sport
7 months ago

Rulani Mokwena has played down Mamelodi Sundowns' early season signs of dominance and said the champions are not looking too far ahead before their ...
Sport
7 months ago