Swallows and Cape Town City share the spoils in Soweto 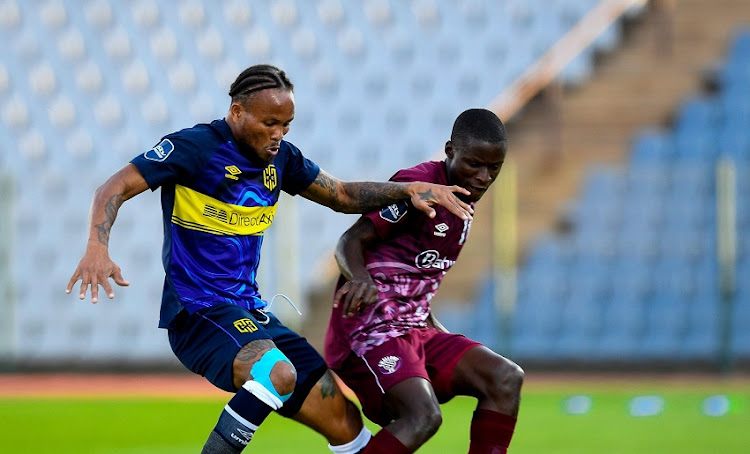 Swallows and Cape Town City played to a 0-0 draw in their DStv Premiership match at Dobsonville Stadium.
Image: TWITTER/PSL

Swallows and Cape Town City played to a 0-0 draw at Dobsonville Stadium in the only DStv Premiership match played on Heritage Day.

They have not seen the last of each other as they meet again on Wednesday in the second leg of the MTN8 semifinal in Soweto where City will have a slight advantage having denied Swallows an away goal in Cape Town in the first leg.

Both sets of players did not cover themselves in glory in this low key match that was watched by Bafana Bafana coach Hugo Broos and his assistants Cedomir Janevski and Helman Mkhalele.

Swallows return to league action next weekend with a tough outing against defending champions Mamelodi Sundowns at Loftus while City’s next league match is against Sekhukhune United at Ellis Park in a fortnight.

The first real notable chance of the match came after 25 minutes when Swallows player Khethukuthula Ndlovu unleashed a powerful shot from outside the box but City goalkeeper Hugo Marques was equal to the task.

A few minutes later, Swallows had another opportunity to break the deadlock but Junaid Sait’s close-range header was collected by Marques after the Swallows defender connected with a free-kick from his captain Lebohang Mokoena.

It was not all Swallows as City also had their moments on the attack with Fagrie Lakay, Bradley Ralani, Mduduzi Mdantsane and Abdul Ajagun but they could not find their past  home team goalkeeper Virgil Vries.

They went at each other in the second half and there were no goals to celebrate but something must give on Wednesday as there must be a winner in the second leg of their semifinal.

Mosele has big future at Pirates if he keeps grounded, says Benson Mhlongo

Goodman Mosele has to understand that his position holds the team together, and if he can handle the pressure of that responsibility at a big team ...
Sport
2 months ago

Mamelodi Sundowns coach Manqoba Mngqithi has praised his players for their professional attitude at training as they prepare to face Orlando Pirates ...
Sport
2 months ago