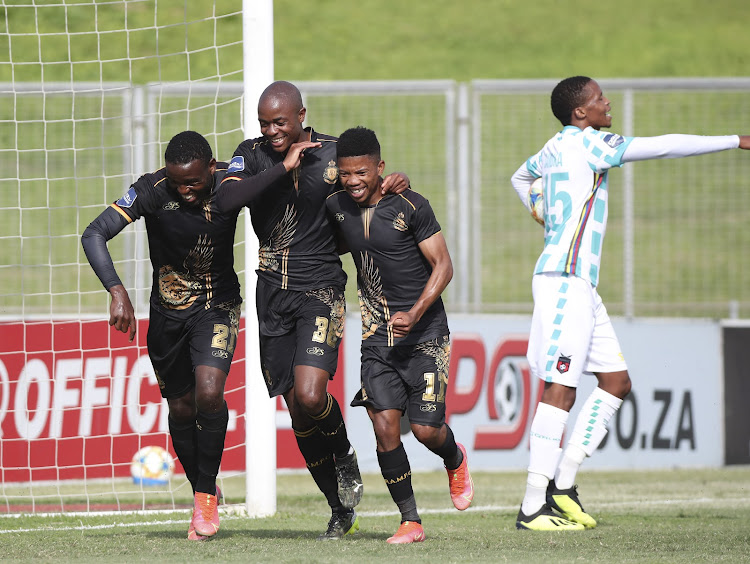 Levy Mashiane is flanked by his Royal AM teammates as they celebrate the team's second goal of the match.
Image: ©Gavin Barker/BackpagePix

Royal AM is cementing itself as one of the most exciting teams to watch in local football, say fans who were impressed with their victory against TS Galaxy on Sunday afternoon.

Last week, the team beat Kaizer Chiefs 4-1 in Soweto. On Sunday, the team followed it up with a 4-2 win.

Goals scored by Tshidiso Monamodi, Levy Mashiane and Victor Letsoalo gave Royal the lead going into the half time break. Pogiso Sanoko pulled one back for Galaxy before Royal’s Kabelo Mahlasela scored his team’s fourth.

Galaxy’s Mxolisi Macuphu scored a consolation goal with one of the last kicks in the match.

The win saw Royal AM move to fourth on the PSL log, with Sundowns and SuperSport United occupying first and second positions respectively.

Here’s what fans had to say about Royal’s latest win:

It seems like Royal AM is dishing out 4’s to certain teams pic.twitter.com/swKYBhYSNE

Royal AM is certainly not a walkover many had expected it to be. #babizebonke

Only two teams that can stop Royal AM, Sundowns le Pirates pic.twitter.com/vcG9YUsOru

Royal Am is that new kid in the block

It seems like Royal AM is going to be a problem,if teams don't take this team serious they gonna get hit badly #RoyalAM pic.twitter.com/nV7AcEK78Z

Hykhona!!! Royal AM is better than Orlando pirates and Kaizer Chiefs pic.twitter.com/kFRtiCkoNs

Victor Letsoalo scored his fourth league goal in three matches as Royal AM stormed to a second successive DStv Premiership win after they crushed TS ...
Sport
4 weeks ago

Shades of Chinese footy on the Durban coastline

Somewhere in China there is a man called He Shihua.
Sport
4 weeks ago

The last few days have been hell for those who pledge allegiance to the Kaizer Chiefs flag and Sunday's away league outing against Limpopo strugglers ...
Sport
4 weeks ago