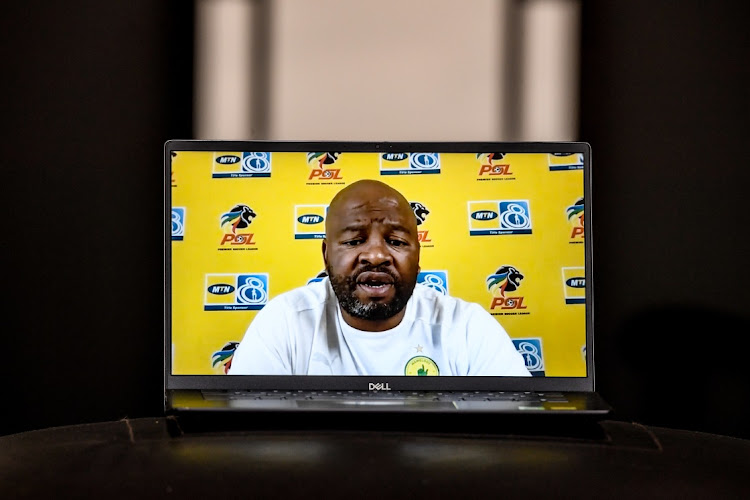 Mamelodi Sundowns co-coach Manqoba Mngqithi admits his galaxy of stars hold the advantage in the MTN8 second leg semi-final match against Lamontville Golden Arrows, but cautioned that the unpredictable nature of the KwaZulu-Natal club makes them dangerous opponents.

Sundowns hold all the aces having scored a crucial away goal in the 1-1 draw in the first leg in Clermont and will need an outright win at Lucas Moripe Stadium in Atteridgeville on Tuesday to complete the job and advance to the final of the R8m tournament.

“ We are playing against a very organised team, a team that scores goals and a team that has both their strikers on form,” said Mngqithi.

“[Knox] Mutizwa has come back and is still scoring goals and [Nduduzo] Sibiya is beginning to show his magic. I believe he is the one player who can give Arrows so much. Sometimes maybe he does not work as hard but at the moment he is on fire and looking good.

“We know we are playing against a very organised team but we have a responsibility at Sundowns to try and take the team to the final.

“ We will have to do our best to make sure we keep a clean sheet, that is the starting point, and probably try to score a goal or two to make sure we confirm our position in the final.

“But we know it is not going to be easy. With their transitions they can be very dangerous and they can also destabilise your flow of the game with their counter-pressing, but we believe we have a team capable of playing this match and going through.

Arrows are winless in their last three matches, with new coach Lehlohonolo Seema still finding his feet at the club, but they have an established reputation as unpredictable opponents.

They drew 2-2 against TS Galaxy and AmaZulu and were held to 1-1 draw against Sekhukhune United at Ellis Park over the weekend.

Mngqithi said he is not sure which Arrows side will turn up on Tuesday, given the club’s notoriety for being an unpredictable side.

“They have a lot of very interesting players who are very dynamic and present different scenarios and they are playing with a lot of youngsters.

“That is probably where most of their unpredictability comes from because with youngsters they are very inconsistent, but when it comes to big games they tend to raise their game to another level.

“That makes it very difficult to understand whether the team you were watching against Sekhukhune and AmaZulu would still perform the same way against Sundowns.

“Against Sundowns chances are they might give it a go and there is nothing to lose for them.

“There is less pressure on them and even if they lose the match they know they would have not lost anything because Sundowns is expected to win the match.

“That makes it a very unpredictable team against us because the level of intrinsic motivation can harm us if we take it for granted.”

Sundowns warmed up for the semi-final with a clinical 2-0 defeat over Orlando Pirates over the weekend while Arrows could only manage a 1-1 draw against Sekhukhune in Johannesburg before they made the short trip to Pretoria for this MTN8 encounter.

Peter Shalulile had two clear-cut chances, and the deadly Namibian scored from both as Mamelodi Sundowns put in a tactical, workmanlike shift to ...
Sport
4 months ago

The last few days have been hell for those who pledge allegiance to the Kaizer Chiefs flag and Sunday's away league outing against Limpopo strugglers ...
Sport
4 months ago

Marumo Gallants' attacking midfielder Katlego Otladisa says his side played "much better" football than Kaizer Chiefs during their 0-0 draw in the ...
Sport
3 months ago

Pirates on Sundowns’ keeper Onyango: ‘He should have been man-of-the-match’

Orlando Pirates paid for being unable to profit from their chances, coach Fadlu Davids said after Bucs' 2-0 defeat on Saturday, adding that Mamelodi ...
Sport
3 months ago

"I hope they pick themselves up before we eventually end up in Motsepe league."
Sport
3 months ago