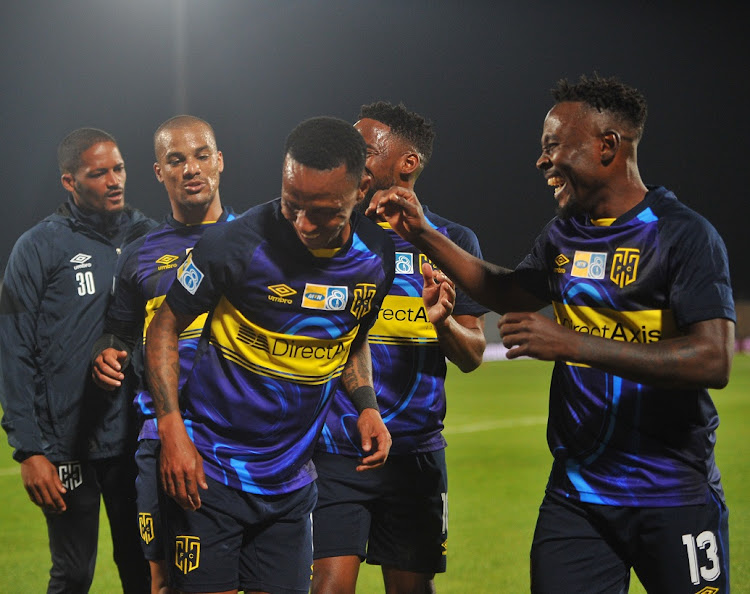 At a rain-swept Dobsonville Stadium Cape Town City appeared to revel in the “home” conditions and left a plucked Swallows FC shivering in the wet in a decisive 4-0 MTN8 semifinal second leg victory to the Citizens on Wednesday night.

Swallows have all the players to be a combination as competitive as their impressive sixth-placed league placing promoted back to the Premiership last season. But their off-field technical staff uncertainty appeared to take its toll on Wednesday night.

Against a keyed-up City, slickly set out to press Swallows high and pressurise the Birds with quick movement, Swallows capitulated.

Brandon Truter's “leave”, assistant coach Simo Dladla taking charge in his absence, has coincided with the Birds drawing 0-0 at home to City in the league on Sunday, then being thrashed in the cup rematch.

City edged the first half. They moved the ball with tempo and pried openings sporadically past Swallows' well-organised defence.

The first shot in anger came from Citizens striker Mduduzi Mdantsane, turning in the area and hitting over the bar. Strike partner Fagrie Lakay fashioned space in the centre outside the box, striking hard but high.

In Swallows' best foray Vuyo Mere was played into space on the right and whipped in a cross, winger Zaphania Mbokoma athletically getting ahead of Taariq Fielies directing a header wide.

But City enjoyed the flow of traffic, Thamsanqa Mkhize crossing and Lakay turning a shot off target.

The Cape side took the lead with a simplicity that is the hallmark of coach Tinkler. Bafana left-back call-up Terrence Mashego took a throw from goalkeeper Hugo Marques, advanced down his flank, and crossed for Ralani to chest down and volley past Vries.

With Swallows needing to score twice because of away goals, they had to come from the break pushing to score.

In the 53rd, substitute Mwape Musonda chested into the patch of wing Kethukutula Ndlovu to volley past the upright. Then Musonda won an aerial challenge against Nathan Fasika to burst into the box, beat Marques and strike on to the right post from a tight angle.

That was one of those match-altering moments. Almost inevitably City scored again five minutes later. Substitute Thabo Nodada threaded a perfectly weighted pass for the run free on the right of Lakay who, with Vries advancing, scored from a sensational chip from outside the box.

As Swallows pushed numbers forward, City had chances to catch them. Mdantsane's chip set Nodada free on the right in a three-on-two to advance and square for fed Ralani to finish his second and the Citizens' third.

A thumping was completed when, from Mpho Makola's corner from the left, fellow substitute Edmilson Dove powered home the header.

Sundowns storm into MTN8 final with stunning win over Arrows

Mamelodi Sundowns have booked a place in the MTN8 final after a dominant 3-0 win over Golden Arrows during the second leg of their semi-final match ...
Sport
1 month ago

Manqoba Mngqithi has said Mamelodi Sundowns' MTN8 ambitions have over the years always been sidetracked by more pressing events, such as the Caf ...
Sport
1 month ago

Swallows coach Dladla: Ntshumayelo ‘brings so much to the team’

Swallows FC stand-in coach Simo Dladla has said that the decision that he would take charge of the team came after a "lengthy meeting" between head ...
Sport
1 month ago