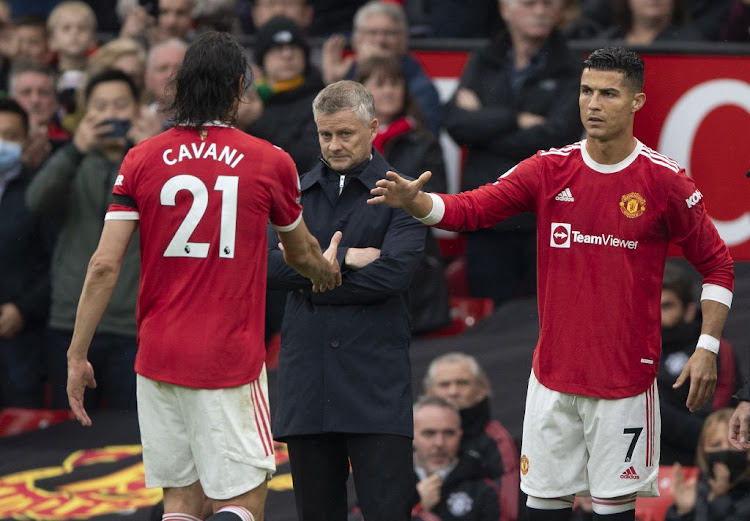 Edinson Cavani of Manchester United is replaced by Cristiano Ronaldo as manager Ole Gunnar Solskjær looks on during the Premier League match against Everton at Old Trafford on October 02, 2021 in Manchester, England.
Image: Visionhaus/Getty Images

Former Manchester United manager Alex Ferguson said Cristiano Ronaldo should have started last weekend’s 1-1 home draw with Everton instead of being brought on as a second-half substitute by current boss Ole Gunnar Solskjaer.

Ronaldo came on just before the hour mark with United leading 1-0, but Everton grabbed an equaliser in the 65th minute and held on for the draw.

In a video posted on social media, Ferguson is heard telling mixed martial arts great Khabib Nurmagomedov that Everton were given a boost “when they saw Ronaldo wasn’t playing ...”

When Nurmagomedov reminded Ferguson that Ronaldo came on in the second half, the Scot added: “Yeah I know ... but you should always start with your best players.”

“You should always start with your best players.” [@MirrorFootball] #MUFC pic.twitter.com/7dLgZAu6s4

Ronaldo has said Ferguson, who first signed him as an 18-year-old from Sporting Lisbon in 2003, played a big role in the player coming back to Old Trafford.

United, who have 14 points from seven league games, will take on Leicester City on October 16 in the next round of matches following the international break.

Manchester City have made a complaint to Liverpool after a fan allegedly spat at their backroom staff during Sunday's 2-2 Premier League draw at ...
Sport
2 weeks ago

Former South Korea midfielder Park Ji-sung urged Manchester United fans to stop singing a song about him that contains a negative stereotype about ...
Sport
2 weeks ago

Manchester City came from behind twice to earn a 2-2 draw with Liverpool on Sunday in a pulsating Premier League encounter at Anfield.
Sport
3 weeks ago