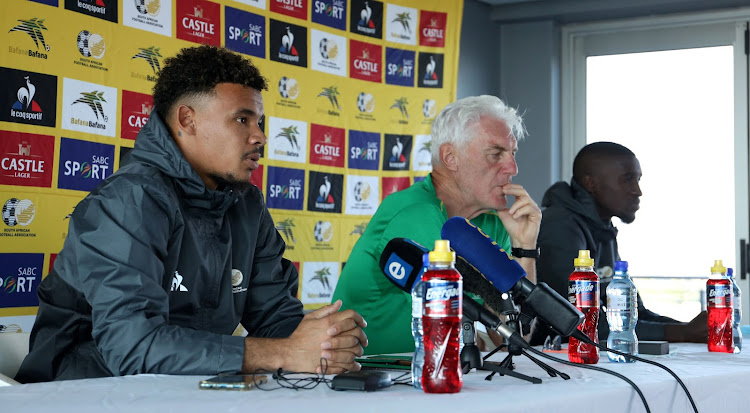 Bafana Bafana captain Ronwen Williams says the camp is buzzing with positivity and excitement in a way he has never experienced before in his eight years in the national team fold as they prepare for a titanic battle against Ethiopia.

Bafana have been training at the Dobsonville Stadium since assembling on Sunday and  depart for Bahir Dar on Thursday for their crucial back-to-back qualifiers for the 2022 Fifa World Cup on Saturday at 3pm SA time.

Hugo Broos’ team will host Ethiopia in the return match at FNB Stadium on Tuesday at 6pm.

“The mood in the camp has never been this positive before,” said the 29-year-old skipper.

“I have been part of the national team for eight years and to see a camp so lively is wonderful and obviously it is because of the results we had last month.

“We like this feeling and I told the guys that we need to keep it this way because it feels good.”

A visibly angry Bafana Bafana coach Hugo Broos has said there are people who do not have the best interests of the national team at heart after he ...
Sport
3 weeks ago

Bafana go into combat against Ethiopia high on confidence as they top Group G on four points from two qualifiers after a goalless draw against Zimbabwe in Harare and a 1-0 win over Ghana in Johannesburg last month.

But the camp has been a bit chaotic after Broos revealed on Monday that Orlando Pirates central midfielder Goodman Mosele “absconded” without any explanation.

The situation was worsened when key centre-back Mosa Lebusa was turned back by the Bafana doctors on account of being “unfit”, while his Mamelodi Sundowns  teammate Thabiso Kutumela was ruled out after it emerged that the club had taken the striker for a Covid-19 jab.

However, the national team media officer has since clarified on Wednesday that Kutumela has not been released and is training with the team but is being monitored closely in case he develops symptoms from taking the vaccine.

Williams said the team has not been distracted from what he has seen at training sessions.

“It’s amazing. The camaraderie and the spirit has been high and positive even though there have been a lot of bad things happening behind the scenes and some players not coming and some coming late.

“But that has not dampened our spirits. The mood is high and training has been wonderful.”

Williams said some players played for their clubs on Sunday but still insisted on training upon arrival at camp.

“It shows that these players are happy to be part of the Bafana team and that is what I feel we have lacked over the years.

“It is wonderful to be part of this and just to see how positive they are and we hope to keep it that way.”

'Those are matches that can be decisive,' says Bafana coach Broos ahead of clashes against Ethiopia

Hugo Broos has reminded Bafana Bafana that match-day three and four are critical stages of any qualifying campaign and that it is at this juncture ...
Sport
3 weeks ago

Bafana may be high on confidence but will be wary of the Ethiopians, who knocked out Gordon Igesund’s team during qualification for the 2014 World Cup.

With Bafana topping their group after five matches, they needed a draw against Ethiopia in the final match to qualify for the final round of qualification for the Brazil tournament but came unstuck.

They scored first in Addis Ababa through Bernard Parker but ended 2-1 losers as Bafana were humiliated in a group that had Botswana and Central African Republic.

“When the draw came out and I saw Ethiopia I thought oh there we go again,” said Williams.

Goodman Mosele is out of the Bafana Bafana squad to face Ethiopia in crucial back to back qualifiers for the 2022 Qatar Fifa World Cup next week ...
Sport
3 weeks ago

The Bafana captain warned against Ethiopia’s combination play and their patient build ups from the back.

“They believe in their style, the tiki-taka football.

“They knock the ball around from the keeper right through so we just need to have the right structures and the right balance and just believe that we can beat them.”

Coach Broos has already reminded Bafana that match-days three and four are critical stages of any qualifying campaign and it is at this juncture where teams crash out or gather speed. Williams agrees with his coach.

Former Bafana Bafana captain Thulani "Tyson" Hlatshwayo has gracefully accepted his continued exclusion from the national team and believes that ...
Sport
3 weeks ago

During a 2018 World Cup qualifying campaign, Bafana went into back-to-back clashes against minnows Cape Verde in September 2017 on five points and needing to win both matches to qualify for the Russia tournament.

Under Stuart Baxter, Bafana crashed to 2-1 home and away defeats in the final round of qualifiers.

“We have learnt from the previous camps and coaches, against Mauritania and Cape Verde, that do not take any games lightly especially now that African football has grown immensely,” said Williams.

Premier Soccer League (PSL) prosecutor Nande Becker has confirmed to TimesLIVE that he is going to charge the increasingly controversial ...
Sport
3 weeks ago

The SA Football Association Referee Review Committee says the comments they have received following the league match between Kaizer Chiefs and ...
Sport
3 weeks ago

Coach Ellis expects her Banyana charges to up their game

Banyana Banyana coach Desiree Ellis told her side to increase their intensity and shift to a higher gear, despite cruising to a 3-1 victory against ...
Sport
3 weeks ago

Sundowns work so hard they approach matches feeling they are entitled to win, says Mokwena

Mamelodi Sundowns have an aura of invincibility about them already at this early stage of the season but co-coach Rulani Mokwena said the champions ...
Sport
3 weeks ago