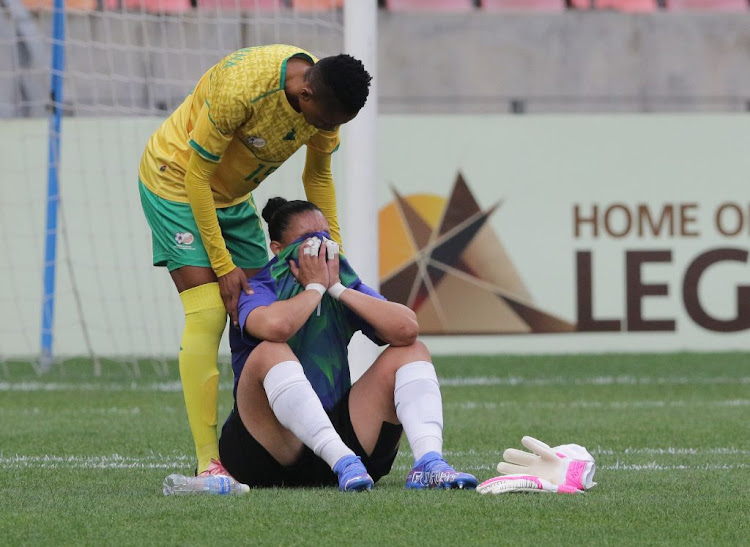 As a result of this hard-fought victory, Malawi will take on Tanzania in the final on Saturday while defending champions SA will face Zambia in the third and fourth playoff.

It was sweet revenge for Malawi as they lost 2-1 to Banyana in the group stages of the competition. This was Malawi’s first win over SA, who were looking to reach the final for the fifth consecutive time, and this is also the first time in their history that Malawi have gone past fourth place.

The first real chance of the match came after 24 minutes when Banyana defender Sibulele Holweni delivered a cross into the box, but it was parried away to safety by Malawi goalkeeper Mercy Sikelo.

Sikelo’s save fell into the path of oncoming Melinda Kgadiete but her grass-cutting shot was cleared away for a corner kick by Chimwemwe Madise, who was providing cover at the far post.

In the 37th minute, Malawi midfielder Ireen Khumalo played a pass to Ruth Nyirongo and she laid the ball for Fazila Chembekezo who used her head to beat Banyana goalkeeper Kaylin Swart.

Banyana equalised in the closing stages of the first half when defender Holweni rifled home a thunderous shot from the edge of the penalty box for her third goal of the tournament.

Malawi retook their lead after 73 minutes when Asimenye Simwaka delivered a close-range pass to Sabinah Thom and the Malawian attacker managed to sneak the ball past desperate Janine van Wyk and Swart.

Malawi’s lead did not last long as Banyana drew level when Holweni successfully converted from the penalty spot to beat Sikelo after Tiisetso Makhubela was brought down by Madyina Nguluwe in the box.

A defensive mistake by Banyana captain Van Wyk allowed Thom to register her second goal of the match when she pounced on a loose ball in the box to beat Swart and secure a place in the final for the Malawians.