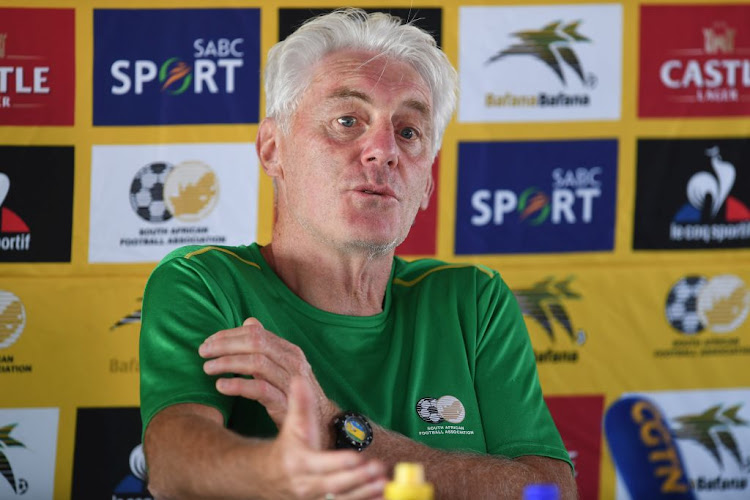 Bafana Bafana coach Hugo Broos has explained the reasons behind the decision to substitute Tshegofatsho Mabasa early in the away 2022 Fifa World Cup qualifier against Ethiopia on Saturday.

Eyebrows were raised when Mabasa exited the Bahir Dar Stadium pitch after just 35 minutes on the clock and observers assumed that an injury to the Orlando Pirates player may have forced Broos' hand.

But the Belgian said injury did not have anything to do with the decision and he was forced to make the early change when he noticed that Masaba was struggling to adapt to the plan they had prepared for the East Africans.

“I know that it was a little bit disappointing for Tsegofatso, but uhhh, he had difficulties [during the match]," a candid Broos said.

“It was for his [benefit] that we changed [things]. I explained [to him why we had to make the change].

“We trained on it [the plan for Ethiopia] this week, but I do not think that he really understood what we asked from him. And therefore we had to change him after half an hour.”

Broos was pleased that his charges dug in deep to beat Ethiopia 3-1 in the World Cup qualifier to strengthen their stranglehold on Group G.

A first-half free kick from Teboho Mokoena in the 45th minute set the ball rolling for the visitors and while Ethiopia captain Getaneh Kebede levelled matters for the home side in the 67th minute, Bafana were not to be denied and guaranteed the three points through strikes from Mothobi Mvala and substitute Evidence Makgopa in the 71st minute and in the referee's optional time respectively.

The Belgian coach said he was forced to think on his feet during the tough away encounter and improvise on other occasions, including just moments before kickoff.

Vincent Pule was to start in the World Cup qualifier but after he got injured during the warm-up moments before the kickoff, he was replaced by Thabiso Kutumela in the line-up. Broos was impressed that Kutumela adapted quickly to the late change and made his presence felt on the pitch.

“It’s always a bad thing that just before kickoff you have to change a player because he’s injured,” he added.

“And also for the team, because everyone is concentrated to start the game and then suddenly 10 minutes before there’s someone who was injured.

“So, I was a little bit afraid but I think that Kutumela did very well and he was also the guy with the 10 others who fight for it till the last minute.”

Bafana are top of Group G after the away win in Ethiopia with seven points and lead second-placed Ghana by a point after three matches played in the qualifiers.

Bafana host Ethiopia in the return fixture at the FNB Stadium in Johannesburg on Tuesday.

Bafana Bafana take on Ethiopia at the Bahir Dar Stadium on Saturday looking to maintain their position at the top of Group G and further enhance ...
Sport
10 months ago