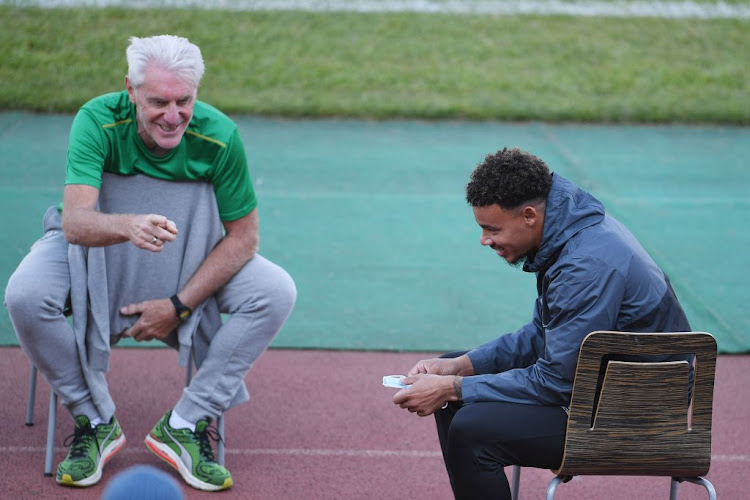 Faith in the national team may take a while to be completely restored but the smouldering embers of hope continue to glow brighter with each passing game as Bafana Bafana attempts to rekindle the stirring relationship of old that the side enjoyed with the nation's soccer lovers once upon a time.

Belgian coach Hugo Broos has embraced the laborious task of reigniting the flame and glimpses of the rebuilding exercise he embarked on shortly after his appointment in May flickered strongly when his charges bravely powered to a 3-1 away win against Ethiopia in a 2022 World Cup qualifier at Bahir Dar Stadium on Saturday afternoon.

It was a solid team display and the coach was pleased that his charges shrugged off the difficulties of negotiating an uneven pitch to emerge with a comfortable win.

The visitors struggled to play their normal game on the bumpy surface and could have found themselves trailing very early in the first half had it not been for some fine goalkeeping from captain Ronwen Williams.

While he was happy with the win, the outspoken Belgian could not resist voicing his displeasure with the Ethiopians' decision to take the match to the multipurpose Bahir Dar Stadium in Bahir Dar.

“Yeah, but I don’t think there were other causes [for the slow start], they [the players] were not [comfortable] on the ball and that’s certainly [because] of the pitch,” he said.

“We were a little bit afraid when the ball was coming back [to us and we needed to] control it or whatever. And you saw that in our game also, we were not confident like we were against Ghana [in the 1-0 home win  at FNB Stadium last month].

“And this is the only reason [and it is because] of the pitch. And I said it before the game, I don’t understand that for such an important game Ethiopia are coming to play [us] here on this pitch.

“It’s also not good for them because they are a team that plays football. It is not kick and rush football that they play. And on this field, you can do nothing else other than kick and rush because it is very difficult.”

Williams' heroics certainly kept Bafana in the match and Ethiopia could have made things a lot more difficult for the visitors had the East Africans managed to find a way past the SA goalkeeper during those frantic opening minutes of this encounter.

The United goalkeeper was called to action when the troublesome Surafel Dagnachew unleashed a venomous curling shot from outside the area and as it deceptively dipped and weaved en route to goal, Williams produced a stunning one-handed save to tip it over the crossbar in the 26th minute.

Disappointment was etched on Dagnachew's face as the tricky player has punished numerous other goalkeepers with a similar strike, and he was certain that he had managed to add the SA to his list of victims.

Captain Williams continued to lead from the front and produced another stunning save 10 minutes later when he denied Abubeker Nasir from point-blank range.

The Ethiopians had dissected the Bafana rearguard with the precision of a skilled surgeon on the operating table and after the perennially troublesome Dagnachew managed to pick out his compatriot among the Bafana defenders, Nasir peeled away and only had Williams to beat to put the East Africans in the lead.

But Williams had other ideas and denied Dagnachew with a brilliant save.

A quick snippet of an off the cuff capture of a team who conquered in Ethiopia, and arrived home at 6am this morning 😴😴😴. Three points tucked away neatly in the luggage. #BafanaPride #FIFAWCQ2022 #BunchOfWinners pic.twitter.com/5YZfnyBORT

Bafana finally picked up their socks after those early escapes and Teboho Mokoena put the visitors in the lead  through a free kick in the 45th minute. Ethiopia captain Getaneh Kebede levelled matters for the home side in the 67th minute but Bafana regained the lead and eventually won comfortably after goals from Mothobi Mvala and substitute Evidence Makgopa in the 71st minute and in the referee's optional time respectively.

While the final score may have been comfortable in the end, Broos said his players did not fully execute the plan he prepared for the Ethiopians.

"[The performance was] not really 100%, but I am not angry about that,” he continued.

"[On the day] we had some other things in mind but again, the team did not feel comfortable on this field. And OK, like I said [to the players] at halftime 'just fight for it and try to win the game, take the result and go back to SA'.”

The Belgian said he was pleased by the fight his players displayed way from home, and in tough conditions.

“And we showed that character, we showed the mentality, even when [Ethiopia] equalised. We went down, we fight for every ball, and we won at last and it’s a great win.”

Bafana Bafana coach Hugo Broos has explained the reasons behind the decision to substitute Tshegofatso Mabasa early in the away 2022 Fifa World Cup ...
Sport
10 months ago

Bafana Bafana vice-captain and defender Siyanda Xulu has warned that the good start in the 2022 Fifa World Cup qualifying campaign will count for ...
Sport
10 months ago