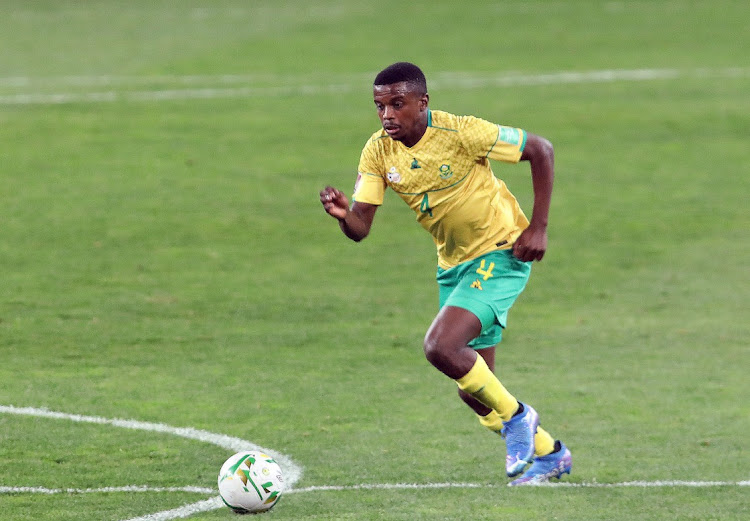 Teboho Mokoena, who is making a splash in the midfield for Bafana Bafana.
Image: Veli Nhlapo

Such is the growing confidence in the Bafana Bafana camp that midfielder Teboho Mokoena's assertion that the current generation of players could take the team to the World Cup will have a far more receptive audience than would have been the case a few months ago.

Mokoena may have been getting a little bit ahead of himself, but the reality is the ranks of those who would have furiously objected to his view of the world will have shrunk considerably after Bafana comfortably beat Ethiopia 3-1 in a 2022 World Cup qualifier at Bahir Dar Stadium on Saturday afternoon.

Bafana have not made an appearance at the World Cup since hosting the global showpiece a little more than 11 years ago, but Mokoena believes that this depressing statistic could soon change in the coming months.

The midfielder said they are brewing something special, as Belgian coach Hugo Broos continues to rebuild the national side and there's reason to believe nothing's impossible, given the team's start in the qualifying campaign for the global showpiece in Qatar next year.

“For me, every time I get a call-up it is an honour and a privilege to represent my country,” the 24-year-old said from the team camp in Johannesburg.

“I am very honoured to be here and it is the proudest moment of my life to represent my country, especially after [playing in] the Olympics [in Japan in July], the Afcon [Africa Cup of Nations qualifiers], the Under-23, the Under-20 World Cup and now Bafana Bafana. Vision 2022 and I am there.

“We have been speaking about Vision 2022 since 2015 and now I am there. We are the group that is going to take Bafana Bafana to the World Cup. So, jah man, it is the proudest moment of my life and I am sure my family is very happy and people back home [are happy too]. I am sure even the young kids back home have the hope and courage they can make it big if they see someone from a small town like Bethlehem making it big in SA, and at the top level.”

Mokoena was among the goal scorers when Bafana beat Ethiopia at the weekend.

He put the visitors in the lead through a free kick in the 45th minute and after Ethiopia captain Getaneh Kebede levelled matters for the home side in the 67th minute, Bafana never looked back and eventually won comfortably after goals from Mothobi Mvala and substitute Evidence Makgopa in the 71st minute and in referee's optional time respectively.

Mokoena said they did their homework on Ethiopia and thoroughly analysed the East Africans.

“As a team we analysed Ethiopia and we knew where their weakness are. So when I stepped up to take that free kick, I knew what I was doing and I wanted to score. So jah, it went in,” he said.

“I have been waiting for that moment. I have always wanted to score for the national team and when that goal in, I was like jah, I have finally made it. Now I am hungry for more.”

The nation's soccer lovers will hope for more of the same when Bafana host Ethiopia in the return match at FNB Stadium in Johannesburg on Tuesday.

Mvala said he happened to be at the right place at the right time when he restored Bafana's lead in the second half. “I think the game was very tough [on Saturday]," he said.

“Ethiopia are a very good team and they played very well, especially in the middle of the park. They gave us a hard time but we also had our moments in attack, they also had their moments.

“Thanks to Ronza [Ronwen Williams] for making several good saves in the first half that kept us in the game. When we went to the half time break, we changed the formation a little bit and we pushed Tebza [Mokoena] and [Ethan] Brooks just in front of me, and I stayed behind. I think it worked for us. We managed them very well and that is how we got our goals.

“I think our defending was very good, and our set-pieces [were good] because we knew that we had height advantage. We used it very wisely.

“I think in that moment I was lucky because I do not know what happened. In the first half I was always going to the near-post in the throw-ins and then in that moment I just changed my mind because these guys [the Ethiopians] were following me, so I just remained in the back.

“The ball came to me and I saw the goalkeeper trying to come to me, but he decided to go back to his post. The ball fell onto my feet and when I [realised] I was alone, I just put the back into the back of the net.”

Substitute Makgopa, who scored the third late in the game to delivered the killer blow, said he analysed the Ethiopians from the bench and had a pretty good idea what he would do when he was introduced into the match.

“When I was on the bench I was able to analyse which one [Ethiopia player] I would go to, meaning the two centre-backs,” he said.

“So luckily, that is exactly what happened when I got onto the pitch and I found myself in the right position at the right time.”

Bafana Bafana beat Ethiopia 3-1 in a 2022 Fifa World Cup qualifier on Saturday to strengthen their grip at the top of Group G.
Sport
7 months ago

Bafana Bafana cemented their spot at the top of Group G after beating Ethiopia 3-1 in front of a few hundred vaccinated fans at the Borg El Arab ...
Sport
7 months ago

Bafana Bafana coach Hugo Broos has explained the reasons behind the decision to substitute Tshegofatso Mabasa early in the away 2022 Fifa World Cup ...
Sport
7 months ago