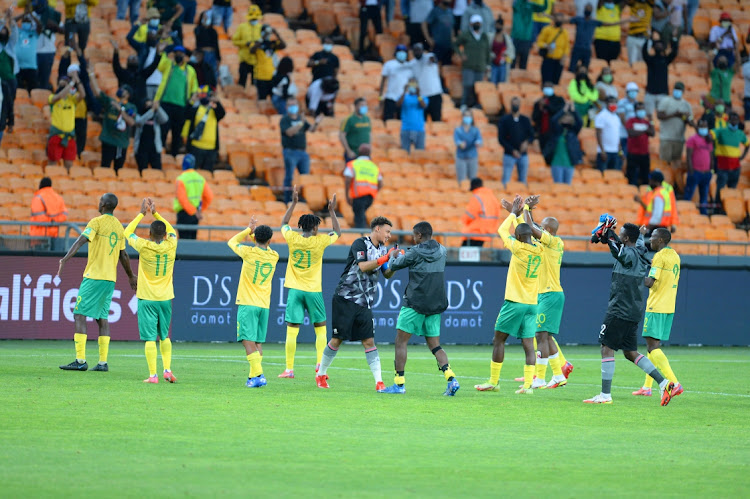 Bafana Bafana players celebrate with their supporters after they beat Ethiopia during the 2022 Qatar FIFA World Cup qualifier on Tuesday.
Image: Lefty Shivambu

A win for Bafana against the Warriors, who have been eliminated from the qualifying race after three successive losses, will leave South Africa on the verge of reaching the final World Cup qualifying stage.

Bafana will go into that crucial home match on the back of three successive victories where they scored five goals and conceded only once, while Zimbabwe will be looking for their first win of the qualifiers.

Broos acknowledged that Zimbabwe are not going to be easy, despite the fact that they have only managed one point from four matches.

“We are still number one on the log and we will see in the home game here against Zimbabwe, which is the most important game for us now. Let’s hope that we will be ready and fresher for that game,” he said.

To get the desired results in the match, Broos said his players must show the determination and character that they have shown in their four matches to stay at the top of the group.

While not always convincing, Bafana beat Ethiopia 1-0 at FNB Stadium on Tuesday night in a game that will have lifted confidence in the camp.

“I am looking at players playing with the combinations like they did against Ghana, I am expecting them to show character like they showed against Ethiopia and I think we have a great chance to finish top in our group.

“I know the situation as it is now, in one month we have to go again with a one-point lead and that means Ghana has to win their next match against Ethiopia. There is no other solution for them.

Bafana coach Hugo Broos happy with progress, but yet to find the best combination

Bafana Bafana have showed marked improvement under coach Hugo Broos, but the Belgian mentor says he has not yet found the best combination.
Sport
9 months ago

“But first of all, for us it is to deal with Zimbabwe and I hope that my colleague (Ethiopia coach Wubetu Abate) will give a little present next month by beating Ghana to make things easy for us.”

Bafana played in front of about 2,000 fans and Broos said he would like to have more against Zimbabwe.

“With regards to the fans, we really hope that for the next game against Zimbabwe there will be more fans in the stands. This is because if you have a bad moment in the game and you have the fans behind you, they will back you and give you energy.

“In this game we had about 2,000 fans inside FNB Stadium and maybe by the time we take on Zimbabwe it will be 10 times more because that will definitely be fantastic for the players.”

Broos added he was glad that the two matches against Ethiopia were over, because they have very good midfielders.

“This was a game I was a little bit afraid of, because we knew that this is a very good team, especially in the midfield. We tried to neutralise them in the midfield but we did not really succeed.

“The danger was always there and it was very difficult for us to keep the ball. We suffered a little bit, but on the other side we could score on the set-piece, and it is something that we knew there would be possibilities for us.

“This is the most important thing, to have a win and stay first in our group after four games and this is what we wanted to achieve. We had an awful trip to Ethiopia last week but the boys were fantastic and their mentality was good.

“The trip to Ethiopia was still in the legs of the boys and you saw it in the match. We didn’t neutralise their good midfield and we suffered, but I can’t blame the players because they fought for 90 minutes and they wanted victory.”

Bafana Bafana have significantly enhanced their chances of progressing to the final stages of the 2022 Fifa World Cup qualification with a ...
Sport
9 months ago

'Pump it up!' Bafana coach Broos and De Reuck call on the 2,000 fans to turn up the volume against Ethiopia

Bafana Bafana coach Hugo Broos and defender Rushine de Reuck have asked the 2,000 fans that are expected to descend on FNB Stadium for the 2022 Fifa ...
Sport
9 months ago

SA Football Association (Safa) president Danny Jordaan said they passed the pilot project of welcoming fans back to the stadium during Bafana ...
Sport
9 months ago