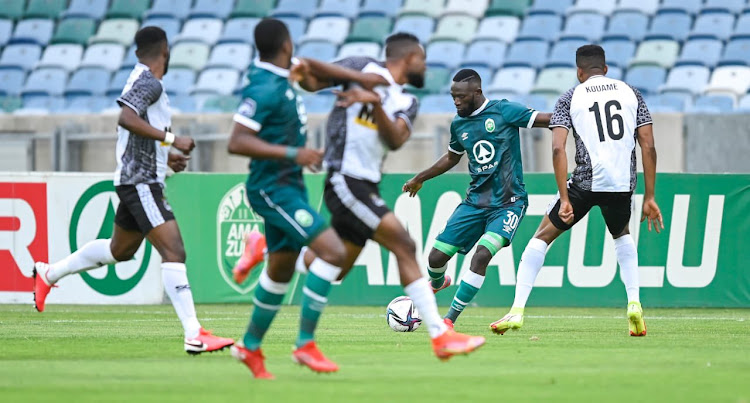 AmaZulu ends the game with a draw after giving the visiting team a tough time.
Image: twitter/AmaZulu

A poor first half led to AmaZulu FC drawing 0-0 against DR Congo’s TP Mazembe in the first leg of the Caf Champions League second preliminary round at the Moses Mabhida Stadium in Durban, Usuthu coach Benni McCarthy said after the match on Friday night.

The Durban club will now have to beat Mazembe, the five-time winners of this competition, at the Stade de TP Mazembe in Lubumbashi on Saturday if they want to progress to the group stages in their first appearance in Africa’s most prestigious club competition.

Beating Mazembe on their artificial pitch where they had a 74-match unbeaten record in all Caf competitions before losing 2-1 to Mamelodi Sundowns in the group stages of the Champions League last season, may, however, be a very tough ask for Usuthu.

“In the first half we were very slow to everything and we allowed Mazembe to dictate and the ball turnovers were far too easy,” said McCarthy of his team's performance.

The former Bafana Bafana striker said his players struggled to adjust to the pace and strength of the visitors but commended them for at least making sure they’re not conceding at home as they did in the first preliminary round against Nyasa Big Bullets who beat them 1-0 at home in the first leg.

“We kind of played ourselves into trouble in the first half, but in the second half we adjusted and opened the pitch a little better and there was far more movement from the players.

“We looked much more dangerous in the second half but it wasn’t to be. They have the experience over us and they were just happy to get a draw.”

McCarthy sounded positive about their trip to DR Congo, saying the second leg could still go their way, especially if they can get an away goal.

“I think for them going back having not conceded a goal is a massive plus. But I think the way we played today showed that we can mix it up against the best teams.

“We certainly did have opportunities to cause them a lot of problems. We were kind of naive in the first half but in the second half we were much better and much more composed.

“I think (Thabo) Qalinge, (Luvuyo) Memela and Xola Mlambo, especially coming in the second half, changed things for us a little bit.

“They had speed and pace, and ja we could have maybe got something more from the game than we did. But at least the scores are level and if we get a goal it will still be difficult for them.”

McCarthy’s side will first play TS Galaxy in a DStv Premiership match at the Mbombela Stadium on Tuesday before making their way to the DR Congo.

Losers in the second preliminary round will drop to the last 32 of the Caf Confederation Cup where they’ll have to win a home and away play-offs to qualify for the group stages of that competition.

Orlando Pirates were held to a 0-0 draw by CSMD Diables Noirs during the first leg of their Caf Confederation Cup preliminary round clash in the ...
Sport
3 months ago

Benni McCarthy has already learnt some important lessons during AmaZulu's maiden appearance in the Caf Champions League and he is determined to avoid ...
Sport
3 months ago