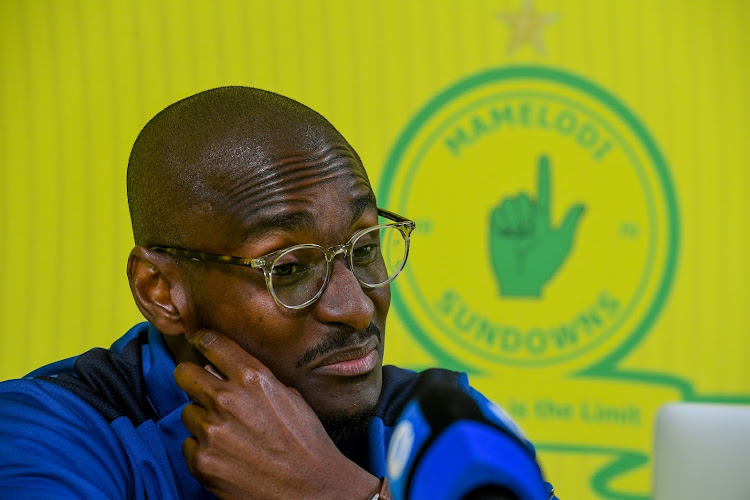 The simmering tension started a few weeks ago when an incensed Broos accused Sundowns and Orlando Pirates of sabotaging his plans in the build-up to the recent back-to-back 2022 World Cup qualifiers against Ethiopia.

Bafana beat the East Africans home and away [3-1 and 1-0 respectively] but Broos dominated the headlines after he suggested that there were attempts to undermine his work.

Mokwena responded to the claims after Sundowns drew 2-2 with Congolese side AS Maniema Union in a Caf Champions League match on Sunday afternoon and said their players returned from the national team either carrying injuries or tired.

“Also unfortunately with the Bafana players, it’s a very, very difficult situation because with Bafana we can’t even communicate with the medical department. We don’t know the itinerary of Bafana, we don’t know the training programme of Bafana,” Mokwena said.

“We don’t get training feedback in relation to the load, there’s no data. So the co-operation between Bafana frustrates us a little bit because in a moment's [notice] as Mamelodi Sundowns, we are always the first to over the years show a willingness to support the nation, to support the cause and release as much personnel [as possible], including [providing] support structures from Sundowns going to represent Bafana Bafana.”

An irate Broos was particularly peeved that Sundowns arranged for Thabiso Kutumela to be vaccinated shortly before he was to join the Bafana camp for the matches against Ethiopia. The outspoken Belgian also took the time to register his unhappiness with Pirates after he was denied access into Orlando Stadium to watch a league match between Bucs and Sundowns last month.

The Premier Soccer League issued a statement and apologised for the incident.

Hugo Broos is bang on the money with his bullishness

There seems to be no dull moments with matters Bafana Bafana.
Sport
10 months ago

Mokwena said they have tried to accommodate Bafana more than other clubs in SA and they had even released several other members of the technical team to assist the national cause over the years, but these attempts to find common ground have not helped soothe relations.

“In relation to the country’s cause, Mamelodi Sundowns has always put Bafana, in fact in certain moments, ahead of its own cause,” Mokwena continued.

“It’s a bit disappointing that even in the previous camp, Thapelo [Morena] returned injured you know. Now he’s not back yet and we’re still trying to get him back into the groove, we gave him a couple of minutes [against AS Maniema Union on Sunday].

“OK, of course he has returned to fitness, he's returned to play, he's returned to train but at the moment he still is not in the right competitive space to be ready. And then you have the situation of Mothobi Mvala, who is so important for us, particularly for this African sojourn [in the Caf Champions League] with his physicality, his ability to win aerial duels and his ability to control and give us a bit more combativeness in the midfield.

“Then he comes back from Bafana and he’s injured, and then Rushine de Reuck in our previous match against Swallows doesn’t finish the game, precautionary because he is feeling muscular complication, but then he continues to play for Bafana Bafana.

"[Thabiso] Kutumela comes back and he’s jaded, he is overloaded and comes back and struggles with the performance. These are some of the things that disappoint us but OK, it is what it is, you have to continue supporting the national cause. It is just disappointing that [after] the international break, with the load, and then of course we do not get any form of response, and not just from the technical team, but even from the medical department.

“But jah it is what it is, ours is just to focus on what we can focus on, try to control what we can control. And as I reiterate once again that as Mamelodi Sundowns we will always look to support the national cause, but it is just a bit disappointing that for the last two international breaks [when] we received our players, they came back with injury complications and these are all muscular.

“And muscular complications speak to you about the training load, match load. We have to improve in that space and see how we can get better relations between the clubs [and the national team]. I see [Pirates player] Vincent Pule is also out, so something is happening in that space and I am not quite sure what it is.”

A brace from an inspired Themba Zwane helped Mamelodi Sundowns to a share of the spoils as the South African side was held to a 2-2 draw by Congolese ...
Sport
10 months ago

Mamelodi Sundowns got a boost ahead of their Caf Champions League match in the Democratic Republic of Congo on Sunday after it was revealed key ...
Sport
10 months ago

Is 20,000 fans enough or should they increase it even further?
Sport
10 months ago