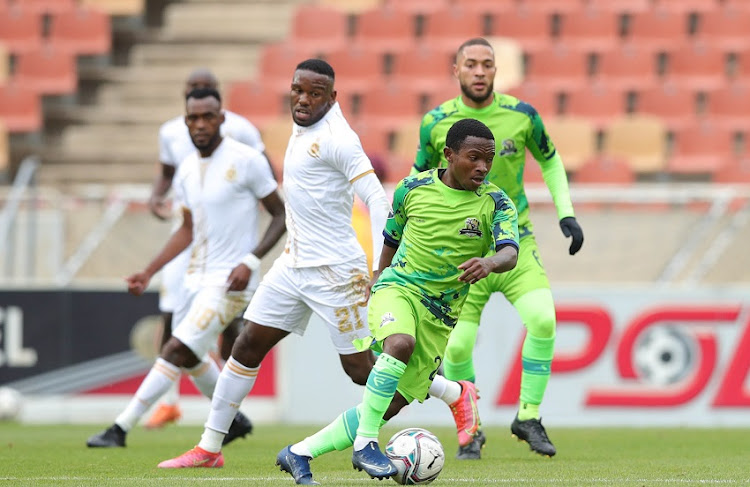 Ndabayithethwa Ndlondlo of Marumo Gallants challenged by Victor Letsoalo of Royal AM during the DStv Premiership match between Marumo Gallants FC and Royal AM at Peter Mokaba Stadium on October 19, 2021 in Polokwane, South Africa.
Image: Samuel Shivambu/BackPagePix/Gallo Images

Gallants were holding on in the closing stages for what could have been their first league win of the season but George pounced from close range as rookies Royal AM went five games without defeat.

With this win, Royal AM, who have won four and drawn one of their past five matches, have moved to 13 points from seven and to third spot behind log leaders Mamelodi Sundowns and SuperSport United.

On the other hand, Gallants remain second from the bottom with three points from six matches and still in search of their first win of the season after three draws and as many losses.

There is no time to dwell on this disappointing result for Gallants as they have a tough trip to Kinshasa in the Democratic Republic of the Congo (DRC) to take on AS Vita in the second leg of their Confederation Cup preliminary round where they are leading 2-1.

For Royal AM, who have surpassed all expectations in the PSL, it does not get any easier as their next league assignment is a tricky clash against Orlando Pirates at the Orlando Stadium next week Thursday.

The real first chance of the match was for Katlego Otladisa, who unleashed a powerful shot from outside the box but Royal AM goalkeeper Patrick Nyame was equal to the task as he tipped the ball over the crossbar for safety.

Royal AM finally asked Gallants goalkeeper Washington Arubi a difficult question just before the half-hour mark when Thato Lingwati delivered a cross to alert Victor Letsoalo but he failed to equalise from close range.

Letsoalo was once again in the thick of things a few minutes later as he rifled a powerful shot from outside the box but it didn’t have enough danger to trouble well-positioned Arubi.

On the 44th minute, Royal AM found themselves in the danger area of Gallants after a quick counter attack but Zukile Mkhize watched in disbelief as his shot ricocheted off the upright with Arubi nowhere to be seen.

Gallants, who had been the better attacking team in the half, opened the scoring two minutes after the restart when enterprising attacking midfielder Ndabayithethwa Ndlondlo placed the ball past Nyame.

Gallants scored their second goal after 73 minutes when substitute attacker Letsie Koapeng produced a stunning moment by curling the ball beyond the outstretched arms of Nyame.

Moments later, Letsoalo brought one back for Royal AM by sending Arubi the wrong way from the penalty spot after Lebogang Mabotja was adjudged to have handled the ball in the penalty box after 76 minutes.

There was to be drama in the dying minutes as George pounced from close range to earn Royal AM a valuable away point and break the hearts of Gallants who continue to wait for their first league win.