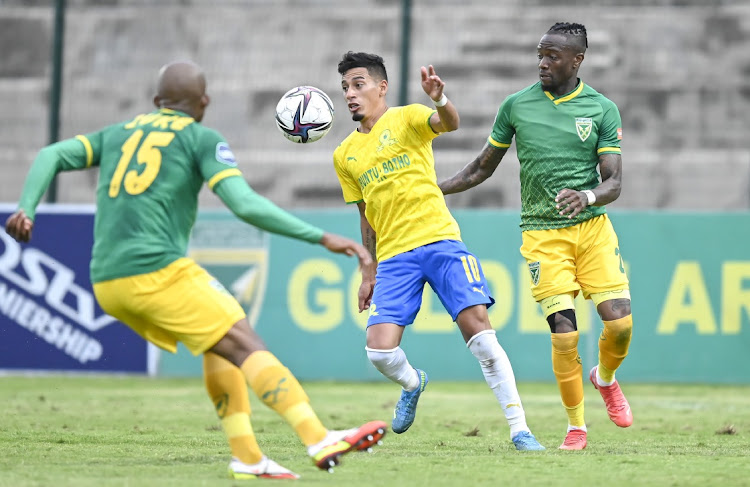 Mamelodi Sundowns coach Manqoba Mngqithi was full of praise for his charges after their hard-fought 1-0 win over a rested Golden Arrows to open a four-point gap at the top of the DStv Premiership table.

With this victory, the Brazilians equalled the record of the most clean sheets in the Premier Soccer League (PSL) era set by Wits University in 2003, where Wayne Roberts was in goal for all their 10 successive matches.

Mngqithi was also impressed by his players who played their second match in three days after a 2-2 Champions League draw with AS Maniema in the Democratic Republic of the Congo (DRC) on Sunday, while Arrows last played 16 days ago.

“It was a tough match as we expected,” said Mngqithi.

“I think they have not played in the past 14 days, if I am not mistaken, and that gave them a little bit of latitude to regroup and prepare for us. They started with the team that played against Marumo Gallants. They were very much sharper than us and they were faster on every duel, but we expected that.”

Mngqithi was not happy with the condition of the Sugar Ray Xulu Stadium in Clermont, which did not allow Sundowns to play their normal passing game.

“What made the situation a little bit difficult for us was the pitch, which did not allow us to play our normal football. A good pitch could have helped us take the steam away from them by keeping possession.

“But unfortunately, because the conditions were not always good, we made a lot of mistakes technically which exposed us to a lot of counter attacks and you know how dangerous they can be on counter attacks. Overall I think the boys worked very hard, it was a game that needed that and one must be grateful.”

Mngqithi was impressed with the performance of right fullback Khuliso Mudau who was named the man of the match.

“When he came out, I did say to coach Wendell (Robinson) that he was probably the man of the match because he had an outstanding performance and he is improving in leaps and bounds.

“We are happy he has improved because we want this competition between him and Thapelo (Morena) to stay strong. It is good for us to have two people who will always do well and we are happy how Mudau is coming up. We are hopeful he can be a little bit consistent with his performances because he is going to help us a lot and we believe he deserved the man-of-the-match award.”

Arrows coach Lehlohonolo Seema was satisfied with the performance of his players who pushed Sundowns all the way.

“If we can play like this going forward, I think we will win a lot of games. We applied ourselves very well but unfortunately we did not get anything out of this match. I feel for the players because they fought very hard against a good side like Sundowns.

“We have another difficult game against Cape Town City in a few days' time and we need to go into that game with the same effort and hunger we showed against Sundowns.”

Mamelodi Sundowns reached a significant milestone of going 10 league matches without conceding a goal with their hard-fought 1-0 DStv Premiership ...
Sport
9 months ago

Orlando Pirates missed a chance to close the gap between themselves and DStv Premiership log leaders Mamelodi Sundowns when they played to a 0-0 draw ...
Sport
9 months ago