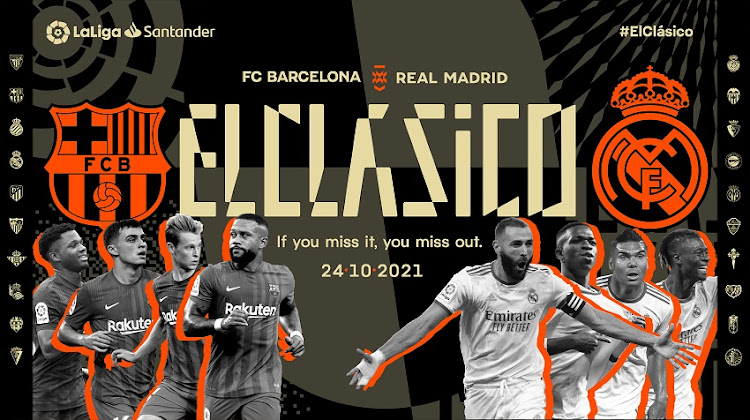 It's the big one in LaLiga this weekend, ElClasico, as FC Barcelona host Real Madrid at the Camp Nou.
Image: LaLiga South Africa

Real Madrid will host Barcelona in El Clasico in the much-anticipated showdown of La Liga Santander on Sunday to be watched by 250 guests on the big screen at the Werehouse on Durban’s South Beach.

It’s a cause for concern for Barca who lost their star player Lionel Messi to French giants PSG in France at the beginning of the season but despite their troubles, they head into this weekend’s Clasico just two points behind Madrid.

LaLiga South Africa brings the longest running club rivalries in the history of world football to fans on Sunday on the big screen at 4.15, with activations in Durban and Johannesburg with the aim to showcase the match’s unmistakable passion and intensity.

Executive director of LaLiga SA Oscar Mayo says it is vital for LaLiga to bring the game to the football-loving community.

“For LaLiga it is very important to be as close as we possibly can to the fans, so we have made a big effort to promote this iconic game on the international stage with over 130 activations rolling out across the globe,” he said.

“With each event we want to showcase the new visual identity of this encounter as well as sharing different experiences with LaLiga, Real Madrid and FC Barcelona fans around the world as we celebrate and revel in this legendary clash of clubs.”

Fans tuning in to watch the match from their home, local bar or favourite restaurant will enjoy an audiovisual experience featuring only the very best broadcast technology fit for such a world-class encounter.

“We are delighted that SA has joined the world in celebrating the relaunch of El Clasico this week,” said Marcos Pelegrin, LaLiga SA’s MD.

“The game is a massive highlight on the LaLiga calendar, showcasing exciting new world football stars and pitting two of the world’s biggest clubs against each other in an epic clash.

“It’s fantastic that Johannesburg dance crews and artists have joined in the fun of the global promotion of the game. We also look forward to a wonderful afternoon of football and entertainment in Durban at the public viewing event, as we continue to bring fans closer to the game and to LaLiga.”