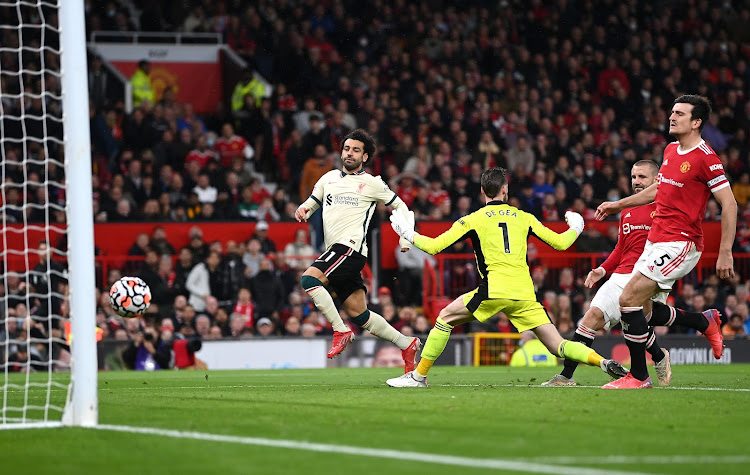 Mohamed Salah scores one of his three goals at Old Trafford.
Image: @premierleague/Twitter

Mohamed Salah hit a hat-trick as Liverpool humiliated Manchester United, romping to a stunning 5-0 victory at Old Trafford in the Premier League on Sunday that leaves Ole Gunnar Solskjaer's future in serious doubt.

United were 4-0 down at halftime for the first time in the Premier League after shambolic defending and the sense of chaos was added to when substitute Paul Pogba was sent off 15 minutes after entering play.

The United hierarchy has shown faith in Solskjaer throughout difficult periods in his nearly three years in charge of the club but will come under pressure to rethink their loyalty to their former player after such an embarrassing performance and result.

South African football is floating on a purple cloud of continental success after two domestic sides cruised into the all-important  group stages of ...
Sport
6 months ago

Juergen Klopp's Liverpool, who are in second place, a point behind leaders Chelsea, looked every bit the title contenders they are with Salah continuing his remarkable run of scoring form -- finding the target for the 10th game in all competitions.

It should have been United though who opened the scoring when, in the fourth minute, Bruno Fernandes had time and space inside the box but fired his shot wide.

Liverpool showed no such generosity a minute later when Luke Shaw sloppily played Salah onside and the Egyptian's pinpoint cross was turned in by Naby Keita.

Shaw was at fault again, eight minutes later, when he and Harry Maguire got in each other's way and Keita took advantage moving the ball outside to Trent Alexander-Arnold whose low ball across the face of the goal was slid in by Diogo Jota.

Salah then made it 3-0, his initial shot from the edge of the area was blocked but United's defence failed to react and Keita pounced on the loose ball, pulling the ball back to the Egyptian who drilled a shot high into the net.

AmaZulu in shock push past Mazembe into group stage

Benni McCarthy’s boys pull off a feat that was thought beyond them.
Sport
6 months ago

Cristiano Ronaldo was then lucky to stay on the field after picking up only a yellow card for kicking out at Curtis Jones while the Liverpool midfielder was on the ground adjacent to the ball.

There was simply no authority or sense of discipline in the United defence and Salah made it four on the stroke of halftime with a near post conversion of a low ball in from Jota.

It was the first time United had been 4-0 behind at the interval in the Premier League era and they were loudly booed off the field.

It took just five minutes after the break for Salah to complete his hat-trick with a trademark clinical finish after Jordan Henderson won the ball from Pogba in midfield and curled a pass into the path of the forward.

Chippa United's inability to find the back of the net reared its ugly head again as they played to a dull, goalless draw against fellow basement ...
Sport
6 months ago

United's day got worse as they had a Ronaldo goal over-ruled for offside by VAR and then substitute Pogba was sent off for a two-footed tackle on Keita, 15 minutes after coming on.

That was a sign for Liverpool to finally take their foot off the gas and keep possession while their supporters taunted Solskjaer and the United fans for the final half hour of the game.

It was a ruthless display from Liverpool, their biggest win at Old Trafford, and a calamitous one from their rivals and it remains to be seen just what the fallout from this humiliation will be.

No need to compare soccer legends, they all make the game beautiful

Comparing Themba Zwane to Doctor Khumalo is futile, as is Pele to Maradona and Messi to Ronaldo, writes Bareng-Batho Kortjaas.
Sport
6 months ago

"I spoke to Senzo Meyiwa the day he was killed," claimed Nota.
TshisaLIVE
6 months ago

Former Brazilian soccer player Pele, not long out of the hospital after surgery to remove a tumour, told fans on Wednesday to start celebrating his ...
Sport
6 months ago

A hat-trick from Mason Mount propelled Chelsea to a 7-0 win over bottom side Norwich City in the Premier League yesterday, extending their lead at ...
Sport
6 months ago