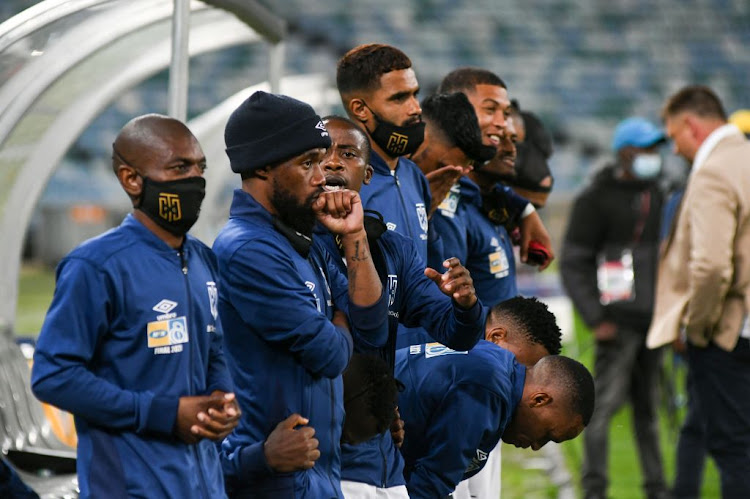 Mamelodi Sundowns finally lifted the MTN8 trophy in its current guise but had to rely on penalties (3-2) to beat tough Cape Town City after Saturday’s final at Moses Mabhida Stadium ended 1-1 after normal and extra time.

Downs won their first top 8 since 2007. The Brazilians dominated the opening three-quarters, opening the scoring through Thapelo Morena (24th minute), though even in that period City were always a threat on the counterattack. The Citizens equalised through Fagrie Lakay (75th), and piled on the pressure at the end.

Hugo Marques 7: Solid and made some decent saves to keep the score at 1-0 when Sundowns dominated the opening two-thirds of the game. One spectacular stop in the shoot-out too.

Thamsanqa Mkhize 7: Never gets beaten at the back, and his tireless running kept Downs left-back Lyle Lakay from being much of a force on the overlap.

Nathan Fasika 4: Rough in the challenge but effective as he and Taariq Fielies kept Sundowns’ dangerous attack largely at bay. Paid for his physicality with a horrendously-timed challenge on substitute Sphelele Mkhulise to be dismissed for a second yellow in extra time (108th).

Taariq Fielies 6: After he was robbed of the ball and then beaten again by Thabiso Kutumela to allow Thapelo Morena’s opening strike for Sundowns, recovered to be a big presence for the rest of the game.

Edmilson Dove 5: Solid defensively but did not offer the energy in attack of his replacement Terrence Mashego.

Thato Mokeke 5: Worked hard but, with Nodada, edged by the class of Sundowns’ Rivaldo Coetzee and Andile Jali.

Thabo Nodada 5: Worked hard but, with Mokeke, edged by the class of Sundowns’ Coetzee and Jali.

Mduduzi Mdantsane 6: City’s No.10 is the organiser and schemer of the attack, and did that with his trademark neatness and ingenuity.

Bradley Ralani 6: Contained for much of the game by Downs’ right-back Khuliso Mudau, but a classy presence on the wing and produced the pass for Fagrie Lakay’s equaliser.

Fagrie Lakay 7: Ran hard and worked tirelessly, his persistence paying off when he took Ralani’s pass and beat Onyango — a feat on its own — with a fine finish in the 75th. Saw his penalty saved.

Craig Martin 5: Quiet on the right wing. Mostly tied up by Lyle Lakay.

Abdul Ajagun (for Nodada, 66th) 6: Brought attacking momentum at a time when City were firmly on the back foot. Saw his penalty saved.

Terrence Mashego (for Martin, 71st) 7: More energetic from left wingback than Dove, who dropped into a three-man central defence as Tinkler changed formations effectively. Should he have started though?

Relebogile Mokhuoane (for Mokeke, 96th): Unable to make much impact in a stalemate extra time period.

Khanyisa Mayo (for Ralani, 105th) 5: Not much impact in extra tine and his weak penalty was saved by Onyango.

Mamelodi Sundowns continued their staggering dominance of the domestic scene when they finally laid their hands on the MTN8 in its current guise with ...
Sport
9 months ago

Cape Town City assistant coach Diogo Peral believes the experience of playing in four cup finals and winning two since their formation in 2016 will ...
Sport
9 months ago