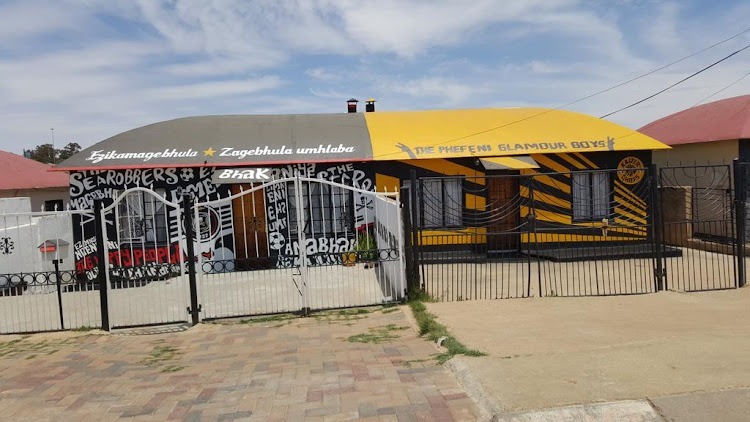 How the joined houses used to look before the house on the right was repainted white.
Image: Gary Ramaru/Twitter

You set out looking for a story originating from a picture circulated on social media of two houses, joined, as some in townships are, where the myth has grown that a Kaizer Chiefs and an Orlando Pirates supporter have painted their “halves” in their teams’ colours.

And then you find something completely different.

You find one side of the joined houses still bedecked in the colours of the Buccaneers, the black and white, the fearsome skull and crossbones, the slogans, war cries and nicknames: “Amabhakabhaka”, “Sea Robbers”, “Ezimnyama Ngenkani” (the Black Ones). But something is amiss. The gold and black of the “Chiefs house” has been painted white. Did the Chiefs fan move?

Then you find another story.

From the Pirates house emerges Johanna Marokane, 76. “It was Pirates people,” she says of those who painted her house that way. She kept the decoration because she is a Pirates fan, because her father was. An initial suspicious introduction, where she is reluctant to speak to the journalist and photographer awkwardly hovering at her gate, gives way to a smile as sweet as her age. 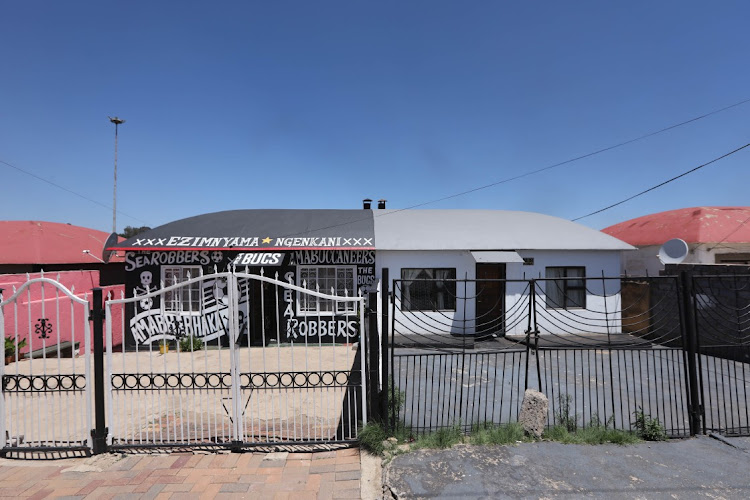 A house (on the left) belonging to Johanna Marokane in Mzimhlope, Orlando West is pictured adorned in Orlando Pirates colours and slogans on November 3 2021. The joined house on the right used to be painted in Kaizer Chiefs colours but the occupants have since repainted it white.
Image: Alaister Russell

She does not know why her neighbour, at work then, and who, when contacted later, asked to remain anonymous, repainted the Chiefs house.

Slowly it emerges these houses were painted that way for a TV advert of a common sponsor of Chiefs and Pirates, the bitter old foes who meet in Saturday’s DStv Premiership Soweto derby at FNB Stadium.

The anonymous neighbour later confirms a one-off payment was made. He’s not a Chiefs fan, he confesses, but that’s not why he repainted the house white again. That was done by his sister, who also lives there and is a Chiefs fan. There was a family disagreement. 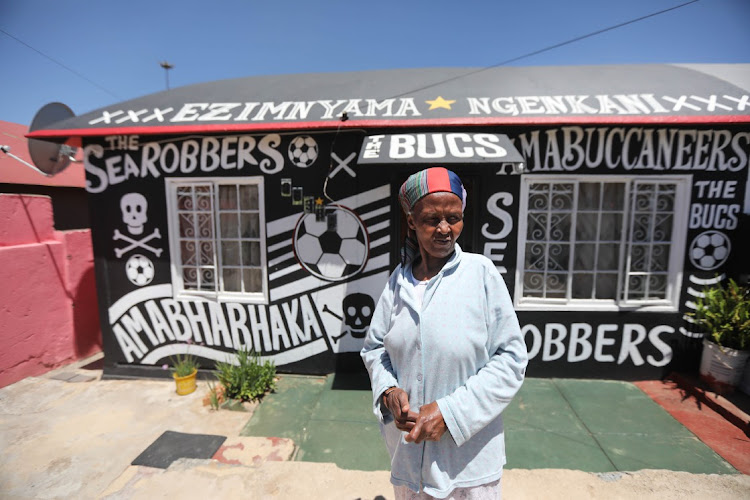 Johanna Marokane poses for a portrait at her home in Mzimhlope, Orlando West near Orlando Stadium in Soweto, Johannesburg.
Image: Alaister Russell

These joined houses were chosen, seemingly, because they fitted the visual requirements — in front is a see-through fence, not a concrete wall as with the surrounding homes. And ultimately it is Marokane, who lives in her “Pirates house” with disabled son Matome, who is the story.

While she long stopped going to Orlando Stadium — the shadow of which, perhaps less than a kilometre away, her house on Nkungu Street, Mzimhlope, Orlando West nestles in — she and Matome watch the Buccaneers on TV. She’s excited Linda Mntambo has been earning game time, winning man-of-the-match awards and scoring. He is from Nkungu Street, Marokane says, and she watched him grow up there.

Soweto resident Johanna “Joyce” Marokane (76) explains how her house in the shadow of Orlando Stadium on Nkungu Street, Mzimhlope, Orlando West, came to be painted in the colours of the team she supports, Orlando Pirates. Her neighbour’s conjoined house was painted in Kaizer Chiefs colours, but has since been repainted white again by its occupants.

“Because it’s an open space,” Marokane says, explaining why an ad company chose 9838A and B of the street for repainting in Pirates and Chiefs colours and slogans as a prop for an ad some years ago.

“Yes, they used it for the TV. I kept the Pirates colours because my father was a Pirates fan. So when your father likes that team all the family will follow him. Even my child [Matome] likes Pirates. I used to go to Orlando Stadium when I was still young, but not now. 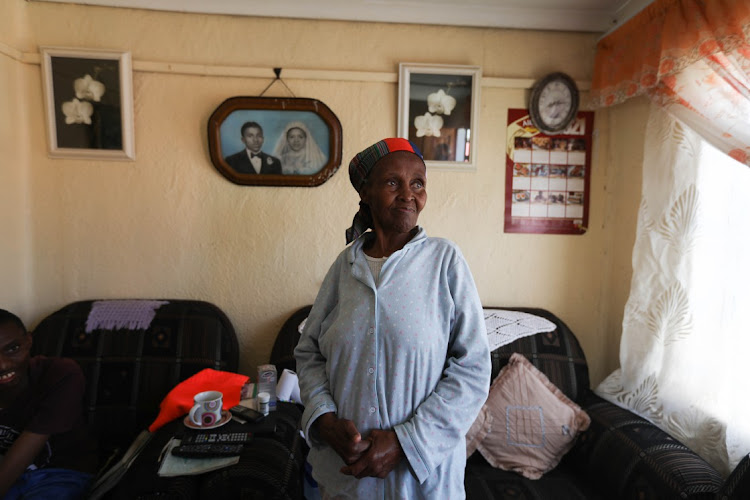 Johanna Marokane poses for a portrait in her home in Mzimhlope, Orlando West in front of a photo on the wall of father Samson and mother Magdalene. Son Matome Marokane (partly obscured) is on the left.
Image: Alaister Russell

“I have lived in this house my whole life. I didn’t get married — you see I have no ring. I only have children. But I say thank God because I have got children.

“When my parents passed away I was left here. They moved here in 1948. That’s when the house was built, and my parents moved here from Alexandra.”

A joined house in Mzimhlope, Orlando West, where 1 half is painted in @orlandopirates colours, near Orlando Stadium. The neighbour's half used to be painted in @KaizerChiefs colours, but has been painted over. Find out why ... story coming soon on @TimesLIVE and @SowetanLIVE pic.twitter.com/IFAkz6Gqnw

Magdalene Marokane was a domestic worker. Father Samson fixed Singer sewing machines for most of his life. In the 1980s Johanna worked at a fruit shop in Carlton Centre, and then as a cleaner at Peoples Bank in Commissioner Street, but has been retired and a pensioner for “a long time”.

In the end there was no idealised story of a Chiefs fan and a Pirates fan one-upping each other with decorations to their joined houses, as Twitter might have had us believe. Just a little old lady who lived with her son, whose initial tetchiness gave way to an angelic smile and gogo stories.

Stuart Baxter: Kaizer Chiefs' defeat against Stellies 'doesn't affect the derby at all'

Kaizer Chiefs’ 1-0 Absa Premiership defeat against Stellenbosch on Tuesday will have “no affect at all” on Saturday’s Soweto derby against Orlando ...
Sport
6 months ago

It is becoming increasingly likely that there will be no spectators at FNB Stadium when Kaizer Chiefs host traditional rivals Orlando Pirates in the ...
Sport
6 months ago

Orlando Pirates came back from a goal down in the late stages to register their first league win in five matches when they beat stubborn Sekhukhune ...
Sport
6 months ago

Orlando Pirates co-coach Mandla Ncikazi is worried about his team’s conversion rate going into the Soweto derby against Kaizer Chiefs on Saturday at ...
Sport
6 months ago