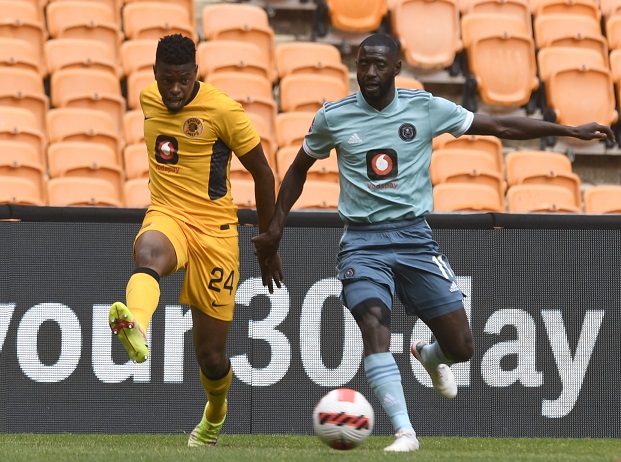 Kaizer Chiefs put in a gritty performance to edge play and the scoreline, appeared to throw victory away, then profited from an injury-time penalty to snatch Saturday’s mistake-riddled DStv Premiership Soweto derby back 2-1 from Orlando Pirates.

Amakhosi, without the ball, pressurised Bucs and aimed to counter and profit from Pirates' mistakes, such as when captain Thulani Hlatshwayo’s defensive shocker led to Keagan Dolly’s opener in the 49th minute.

Coming off a midweek defeat against on-form Stellenbosch FC Amakhosi ground out the win in a workmanlike and far from spectacular derby at an empty FNB Stadium, though Chiefs also appeared to have spurned their opportunity for three points.

Defensive errors played a part in all the goals. Chiefs allowed Linda Mntambo a soft equaliser in the 87th.

Bucs’ mostly impressive new Nigerian centreback Olisa Nda unnecessarily fouled Khama Billiat in the box in the 91st, allowing Dolly to steal back the victory for Chiefs, with the winger’s second coming from the spot in the 92nd.

The two teams mimicked each other in layout.

Chiefs coach Stuart Baxter had Daniel Akpeyi in goal, and a back four that saw Sibusiso Mabiliso drafted into left-back for injured Sifiso Hlanti. Njabulo Ngcobo, Cole Alexander and Phathutshedzo Nange were a three-man midfield behind an attack of Dolly, Khama Billiat and Bernard Parker.

Pirates’ co-bosses Mandla Ncikazi and Fadlu Davids had Siyabonga Mpontshane in goal, a back four, and a three-man midfield of Ntsako Makhubela, Fortune Makaringe and Thabang Monare. Linda Mntambo, Kwame Peprah and Deon Hotto were the attack.

Chiefs had some early half-chances, before Pirates wrested a margin of control on possession and territory without penetrating Amakhosi’s back four.

Nange’s tame strike was easily dealt with by Mpontshane. Billiat struck a free-kick — earned by the Zimbabwean on a promising break involving Dolly — comfortably over the bar.

An early handball in Pirates’ area by Thulani Hlatshwayo was not picked up by the match officials.

Bucs settled on the ball and produced some moments of movement. The three-versus-three in midfield, though, largely cancelled each other out with work and covering of spaces, as chances were hard to come by in a competitive and tactical but dour opening half.

Near the break Makhubela broke on the right and crossed, Makaringe capping a bright opening 45 minutes with a header narrowly wide.

Chiefs launched a counterattack soon after the break that seemed to come to nothing until Hlatshwayo’s howler. The former Bafana Bafana skipper’s attempted back-pass found the run to intercept of Billiat to advance on the left and square past lone defender Ndah to a free Dolly, who produced a classy finish.

Makhubela’s chip across the area was miscued on the volley by Peprah. Chiefs, though, largely contained Bucs from real chances.

Bucs plugged away, and eventually were rewarded when Amakhosi — so hard to break down until that point — allowed their edge on the game to slip conceding a soft late equaliser. Shandu’s cross found Dzvukamanja in acres of space to head at Akpeyi. The keeper could not hold the ball, Mntambo striking in the rebound.

In added time Ndah slung an arm to catch Billiat when Bucs’ defender had won the challenge for a bouncing ball, and referee Victor Hlungwani pointed to the spot. Dolly easily slotted low to the left of Mpontshane.

Kaizer Chiefs coach Baxter on Hlanti’s devastating injury: ‘It was like a pistol shot’

In-form left-back Sifiso Hlanti looks set to miss the rest of the 2021-22 season with a devastating injury in training on Thursday, Kaizer Chiefs ...
Sport
7 months ago

Orlando Pirates have an injury list that could easily have been a team list, co-coach Mandla Ncikazi has said ahead of Saturday’s DStv Premiership ...
Sport
7 months ago

Kaizer Chiefs coach Stuart Baxter has admitted that Amakhosi and Orlando Pirates legend Marks Maponyane may have a point that the stature of the ...
Sport
7 months ago