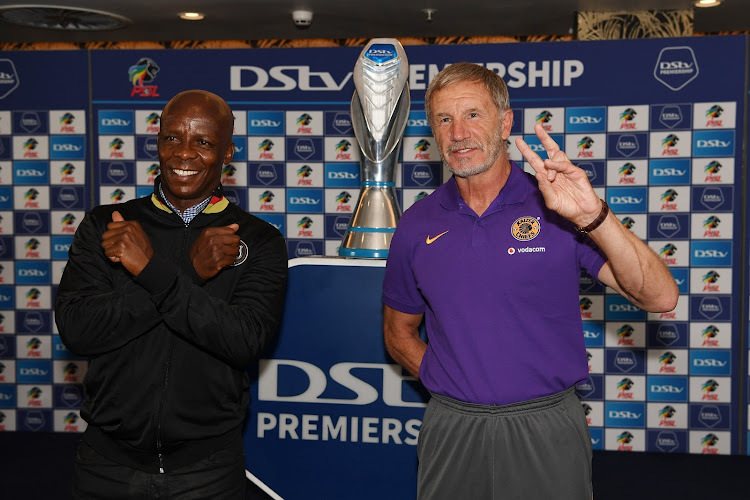 He did not say so in so many words, but Orlando Pirates co-coach Mandla Ncikazi also only thinly disguised his belief that the handling of Tshegofatsho Mabasa by Bafana Bafana coach Hugo Broos has played a part in damaging the striker’s confidence.

Ncikazi said Bucs’ technical staff are working on nursing Mabasa back to his best ahead of Saturday’s DStv Premiership Soweto derby against Kaizer Chiefs at FNB Stadium (kickoff 3.30pm).

Mabasa was called up by Broos to last month’s back-to-back 2022 World Cup qualifiers against Ethiopia and started the first game away in Bahir Dar, but was substituted by Victor Letsoalo in just the 35th minute of the 3-1 win to SA.

The big centre-forward did not feature in the return 1-0 victory at FNB Stadium, and was not included by Broos last week for next week’s final two group matches at home to Zimbabwe and away against Ghana.

Ncikazi was asked how much he believed what happened with the national team might have affected Mabasa’s confidence, and suggested Broos had not done enough research on how to employ the ex-Bloemfontein Celtic forward.

“I wish things were different about how everything transpired around him and how he plays,” Ncikazi said.

“If you miss that you might make a mistake. You will see a player playing well in a another team and when you bring him into your team he doesn’t do well because you have missed the concept of who he is.

“We are helping Mabasa. He’s a confidence player. You can see that the confidence has been knocked a bit.

“But I’m not worried. We have a responsibility as coaches to help him to be better. He’s a very important member of our team.

“And when he gets better he will get goals. He’s a very good player — he will go back into the national team at the right time.”

Mabasa’s loss of confidence, failing to score in five league games, and injuries to other key attackers have left Ncikazi and co-coach Fadlu Davids with a batch of forwards who have been notably hit-and-miss upfront.

“Complaining is not going to help you — you just have to give confidence to the available players,” Ncikazi said.

“If it means we go for [Boitumelo] Radiopane, who is doing well at our MDC [reserves], we’ll do that. [Ghanaian Kwame] Peprah is still adapting — any player who has been playing outside the PSL needs some time. I hope his adaptation comes soon.

“This is what we have and we have to live with that. If we can’t score through the strikers we have to find goals somehow. For us it’s to find solutions — create numerical advantage in the attack and anybody who gets there should score.”

Kaizer Chiefs coach Stuart Baxter has admitted that Amakhosi and Orlando Pirates legend Marks Maponyane may have a point that the stature of the ...
Sport
2 months ago

Orlando Pirates have an injury list that could easily have been a team list, co-coach Mandla Ncikazi has said ahead of Saturday’s DStv Premiership ...
Sport
2 months ago

You set out looking for a story originating from a picture circulated on social media of two houses, joined, as some in townships are, where the myth ...
Sport
2 months ago