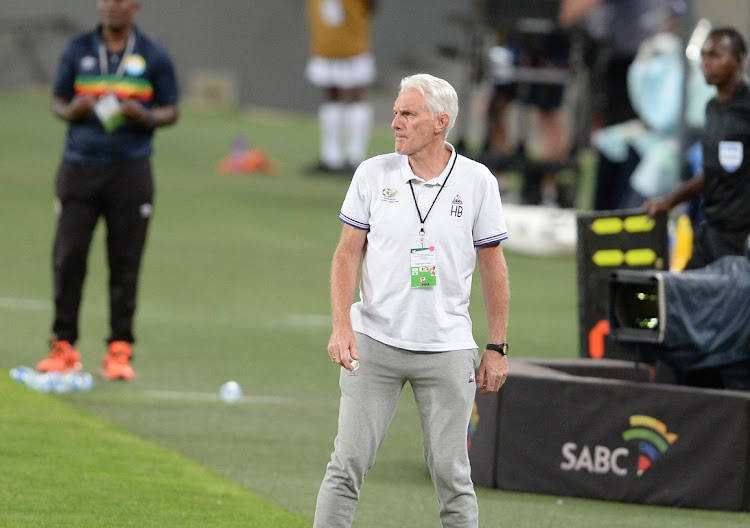 Bafana Bafana will have to win their match against Zimbabwe on Thursday night to have a chance of winning Group G in the 2022 Fifa World Cup qualifiers after Ethiopia did them a huge favour by holding Ghana to a 1-1 draw in an earlier match at the Orlando Stadium in Soweto.

A win will keep coach Hugo Broos’ team on top of the group and three points ahead in the final round, which will see Bafana needing just a point in Sunday’s match in Ghana to go through to the final qualifiers for the World Cup in Qatar next year.

Ethiopia had no business disturbing Ghana in winning the match, as they are already out of the running for Qatar, but Ethiopian skipper Getaneh Kebede cancelled Ghana’s first-half lead with a well-taken strike in the 79th minute.

Black Stars captain Andre Ayew seemed to have given the "away" team all three points when he beat Balcha Shanko with a superb free-kick just outside the area in the 21st minute.

Ghana dominated proceedings, but Ethiopia also created a few chances that Joseph Wollacott did well to keep away in the first stanza.

There was always a chance that Ghana could extend the lead with Ayew’s brother Jordan, Mohammed Kudus, and Richmond Boakye all looking dangerous in and around the Ethiopian penalty area.

The lush pitch at Orlando stadium suited most of the Ghanaian players based in Europe, but Ethiopia looked very comfortable on the ball, and could have won had taken their chances.

Shemeles Bekele came close to equalising for the Ethiopians, but his strike hit the upright on the hour mark with Wollacott well-beaten.

Ten minutes later, there was no chance of Wollacott denying Kebede, who finished with aplomb inside the area after an exciting build-up.

This game was moved to SA after Fifa and Caf ruled there were no stadiums in Ethiopia that could meet their hosting standard. The decision was strange, because the Ethiopians had already hosted both Zimbabwe and SA at Bahir Dar Stadium.

The Ghanaians had protested against being hosted in SA - their biggest rivals in the group - but their complaints fell on deaf ears, hence the decision to play the game in Orlando on Wednesday.

After struggling to stamp their authority in the group, Ghana appointed their 2010 World Cup coach, Serbian Milovan Rajevac, 67, in October, replacing Charles Akonnor, who succeded Kwesi Appiah in 2020.

Under Rajevac, Ghana won the first two qualifiers against Zimbabwe last month, giving the Black Stars hope of finishing ahead of Bafana in the group.

The match on Sunday at the Cape Coast Stadium in Ghana will kick off at 9pm (SA time) and Bafana will only need a point to go through to the final round, a play-off match against one of the other nine group winners, provided they beat Zimbabwe at the FNB Stadium on Thursday night.

The final round, which will be a two-leg play off, will be take place during the Fifa international break in March next year.

Due to the heat conditions, the 22nd Fifa World Cup in Qatar will be played from November 21 to December 18 next year and, as usual, only five countries will represent the African continent in a 32-team global showpiece.

Neil Tovey calls for Bafana Bafana to believe against Zimbabwe

Bafana Bafana beat Zimbabwe 1-0 to remain at the top of Group G in the 2022 World Cup qualifier at FNB Stadium on Thursday night.
Sport
6 months ago

SAZI HADEBE | Come on, Bafana, bring SA some happiness. You know you can do it

Neil Tovey, the only skipper to lead Bafana to silverware 25 years ago, says SA football fans are ‘hungry for happiness’
Sport
6 months ago