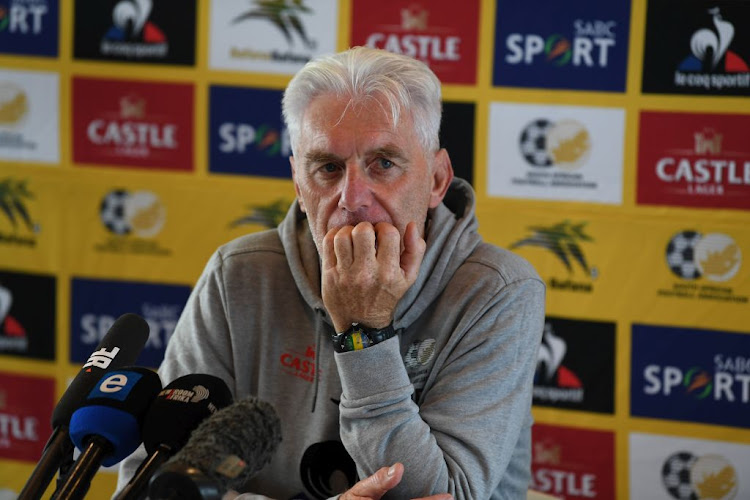 A dubious penalty awarded by Senegalese referee Maguette Ndiaye in the 31st minute helped Ghana beat Bafana Bafana and secure passage to the playoff round of the 2022 World Cup qualifiers at Cape Coast Sports Stadium on Sunday night.

Referee Ndiaye bizarrely awarded the penalty after deciding that Rushine de Reuck fouled Daniel Amartey inside the area when there was barely contact between the two players. The ball was floated into the area by Daniel Kofi Kyereh after a corner kick and as the two sets of players positioned themselves, Amartey suddenly collapsed on the ground in apparent agony. The Ghanaian player dropped to the ground in such dramatic fashion you would have sworn that he was hit by a speeding Gautrain.

De Reuck was stunned when Ndiaye immediately pointed to the penalty spot, but the Senegalese match official was not done. He then proceeded to hand the bemused Bafana player a yellow card as if it to suggest that his decision was justified. Television replays showed that not only did Ghana not deserve the penalty, Amartey should consider a career in acting at the end of his playing days.

How’s this a penalty? pic.twitter.com/BuKeteN3rx

Captain Andre Ayew stepped up to the penalty spot and beat Bafana goalkeeper Ronwen Williams with a low shot to put the grateful home side in the lead.

It was a devastating blow for Bafana coach Hugo Broos' brave charges after they competed bravely for months as they attempted to win Group G and give the nation a chance to qualify for the World Cup for the first time since the 2002 tournament.

The two sides finished the group level on points, 13 points, but Ghana sneaked through to the next round after one goal more. Those who questioned the decision to allow match officials from West Africa to officiate a match in a neighbouring country will feel vindicated as there were several calls made by Ndiaye and his colleagues Samba Elhadji Malick (Assistant I), Camara Djibril (Assistant II), and Gueye Daouda (fourth referee) that left a bitter taste in the mouth.

The officials made a mockery of the game at times and it remains to be seen if the SA Football Association will complain to the Confederation of African Football about their conduct.

The two sides had engaged in a tension-riddled see-saw battle for control of the group for months and Bafana had the advantage going into the final match of the group on Sunday night.

The South Africans had a three-point lead ahead of Sunday night's decider and needed either to get an outright win or a draw to secure a place in the two-legged playoffs to decide the five teams that will represent the continent in Qatar next year.

It was always going to be a tense match between the two rivals and Ghana made their intentions very clear inside the opening minutes when they laid siege to Williams' goal.

How was that a penalty? Disgrace @CAF_Online

Urged by a vociferous crowd at the Cape Coast Sports Stadium, Ghana went on the offensive almost from the opening whistle and Jordan Ayew thought he had been gifted a clear path to goal when referee Ndiaye ruled against the home side.

Bafana took a very long time to settle down and sensing the hesitancy, Ghana took advantage and continued to pile on the pressure.

Ghana increased the pressure as the match progressed and asked several questions of the visitors. But the turning point came in the 31st minute when Ghana won the penalty that would prove decisive to the outcome of this encounter.

It was end-to-end action as Bafana searched for the elusive equaliser, while Ghana looked for the killer blow that would have made the game safe.

Mistakes started to creep in and Bafana needlessly gave away the ball in dangerous areas, allowing the home side to keep control of the match.

Several SA players were noticeably off their usual stride and gave the West Africans far too much time in critical areas on the pitch.

The final whistle cut like a knife and while the Ghanaians celebrated, the visitors collapsed onto the pitch in devastation. De Reuck ​was inconsolable after the final whistle and seemed to blame himself for the defeat.

Several of his teammates tried to comfort the devastated player as he made his way off the pitch.

Bafana's date with destiny looms large on the horizon: 'We are so close now'

The seconds are ticking down to Bafana Bafana's crunch 2022 World Cup qualifier against Ghana on Sunday night and coach Hugo Broos is well aware of ...
Sport
6 months ago

Bafana Bafana coach Hugo Broos has laughed off suggestions that his job could come under scrutiny if his charges come up short in the quest to ...
Sport
6 months ago

Bafana Bafana must avoid defeat against the Black Stars to go through to the next round of World Cup qualification.
Sport
6 months ago

As Bafana Bafana meet Ghana in Cape Coast in the decisive final Group G 2022 World Cup qualifier on Sunday night the main objective of the campaign – ...
Sport
6 months ago