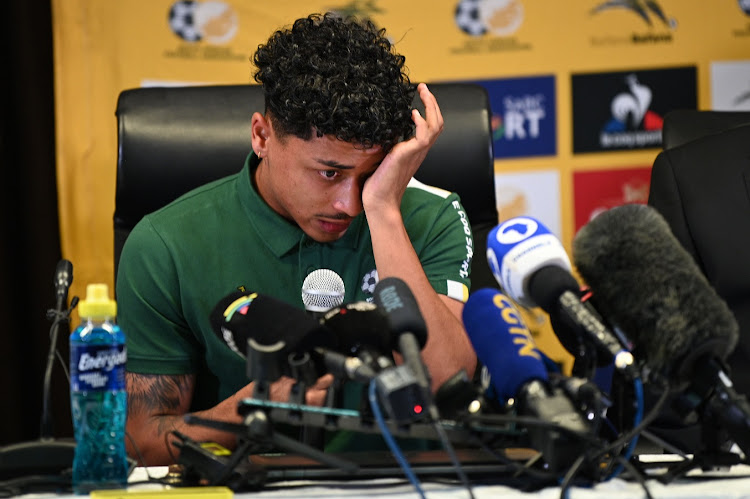 Bafana Bafana coach Hugo Broos said he told his bench after 15 minutes his team “could not win”, while his players battled to contain their emotions describing their disappointment at the manner of their 1-0 World Cup qualifying defeat to Ghana.

Rushine de Reuck, who conceded the greatly contested penalty that led to Andre Ayew's winner in Cape Coast, which saw Ghana (level on 13 points and a +4 goal difference with SA) progress to the final round as Group G winners on goals scored, said it felt as if the game was “rehearsed”.

Safa have asked Fifa to investigate the performance of Senegalese referee Maguette N'Diaye and protested the result, which the global body has said is under consideration by its disciplinary structure.

“You can be sure that the determination was there, we wanted a good result, and a good result was a win. We knew it would be very difficult, but we should play a game to be qualified for the next round,” Broos said.

“Then the game started, and after 15 minutes I went to the bench and I said, 'Forget it, forget it, Ghana will win this game'.

“In my career I had those games where you think the referee is against you. And after the game you have to be honest with yourself that, 'You were too nervous, you didn't see what it was and, OK, he was also against the opponents'.

“But here after the game I was more convinced that he had been against us, that we couldn't win that game.”

Bafana Bafana players joined Safa executives at a press conference held on November 17. The press conference focused on allegations of bias by match referee Maguette Ndiaye. The SA Football Association has called on Fifa to investigate the game.

De Reuck said he had the sense everyone but Bafana was in on a plan.

“It was a huge game — we knew what it would mean for the country to qualify for the next round,” the Mamelodi Sundowns centreback said.

“ ... But I felt like the opportunity of getting a result was taken away from us because of the decisions.

“It was so obvious. It felt like the game was rehearsed, like everybody knew what was going on, from the referee to the Ghanaian players and the ball boys.

“So it was very tough for us to see that happening. I can even say that even from the first 10 minutes of the game you could see that you're not going to get anything right [in the eyes of the officials].”

“I think we have top players in this team — we must just keep believing in ourselves. The future looks bright,” Mokoena said.

“So it's very sad for me and also my family back home. I know they are crying with me because they know my goals and what I want to achieve for my future and myself.

“But, ja, I'm very emotional so I can't carry on. Thanks very much for the support.”

Ethan Brooks, the 19-year-old TS Galaxy midfielder who only made his Bafana breakthrough playing at the Cosafa Cup in July, lasted less time before breaking down in tears.

“Being one of the youngest and smallest on the field I did go out there doing my best, competing in the duels. It just felt that in every duel I got into, the ref just turned his head the other way,” he said. “This is a good bunch of players I've been with, and it hurts to go out like this, but you learn, you grow from this.”

The SA Football Association (Safa) has said that a Ghanaian FA (GFA) statement containing a number of factual inaccuracies regarding Safa's appeal to ...
Sport
6 months ago

“This submission is about the firm suspicion, maybe even conviction now that the report is there, that the match was unlawfully manipulated,” said ...
Sport
6 months ago

Disappointed Broos looks beyond the gloom after Bafana’s exit