Veteran Bernard Parker delivers the only goal of the match 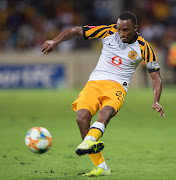 Kaizer Chiefs shrugged off the inconvenience of a power failure at the Harry Gwala Stadium to beat home side Maritzburg United in a league match that started 90 minutes after the scheduled kick off.

The two sets of players were left frustrated when they were forced to warm up a few times as the kick off time kept on being shifted while electricians struggled to switch on the flood lights at the Pietermaritzburg venue.

But after play finally got underway, Chiefs appeared to adapt to the disruptive situation a lot more effectively than the home side, and eventually emerged victorious in a game that will not have painted the Premier Soccer League in a positive light.

A spectacular diving header from Bernard Parker in the 63rd minute gave Chiefs the priceless points after the captain led from the front to beat Maritzburg goalkeeper Marcel Engelhardt with the breathtaking header.

Parker had worked his socks for long periods during this encounter and was rewarded when his well-timed run saw the veteran player connect perfectly with the ball to beat a bemused Engelhardt.

It was a game that will have pleased much-vilified Chiefs coach Stuart Baxter, as his players displayed superb mental strength to get past the frustration of a power failure that almost saw the match called off.

Baxter's charges settled down very quickly into the match and Njabulo Ngcobo should have put the visitors in the lead inside two minutes after he found himself free in the area after a corner kick from Khama Billiat. But instead of punishing the ball-watching Maritzburg defenders, the unmarked Ngcobo somehow sent his header over the crossbar when he had Engelhardt at his mercy.

Maritzburg began to claw their way into the match after a slow start, and Bongokuhle Hlongwane should have at least troubled the visitors when he suddenly played himself into a promising position in the 10th minute.

But he struggled to control the ball after it had floated invitingly in the air and spurned the glorious opportunity. After regaining his composure, his headed attempt flashed wide off Chiefs goalkeeper Daniel Akpeyi's goal, to the relief of the visiting Soweto side.

The effects of unexpectedly playing a night match long after the scheduled kick off was very noticeable as the match progressed and the two sides struggled to impose themselves on proceedings. It was no surprise when they headed to the halftime break with the match still goalless.

Chiefs returned with more purpose after the halftime break and started to ask serious questions of the visitors. But while the tempo of the match increased, it seemed it would take something special to finally break the deadlock. Enter Parker.

The 35-year-old former Bafana Bafana player showed that class is permanent when he delivered the match-winning blow for the visitors.

Maritzburg never dropped their heads and continued to test Akpeyi, taking shots from distance as they continued to search for the equaliser.

But in the end, Chiefs withstood the late pressure to win this match.

It was a match that nearly did not go ahead as planned after the power failure plunged the league fixture into darkness and uncertainty.

Play was supposed to commence at 5:30pm but after the stadium flood lights failed to go on, the game was postponed to 6pm while electricians worked on the problem at the Pietermaritzburg venue.

The home side tried to buy time as the issue persisted and the players were asked to return to the pitch to warm up again, with the assurance that play would finally get underway 30 minutes later.

But with the early evening shadows stretching over the stadium as the sun disappeared behind the mountains in Pietermaritzburg, the home side started to run out of options.

The players returned to the change rooms and it seemed the match would not go ahead.

But the electricians finally managed to get it right and the lights slowly started to come on, to the relief of the home side and match commissioner Bongani Mpinda.

The game finally started at 7pm, almost two hours after the original scheduled 5:30pm kick off.

Chiefs now face Amazulu at home at FNB Stadium in their next league outing in a game that is sure to provide fireworks, given Usuthu's determination to avoid defeat against a side that their coach Benni McCarthy does not seem to ever want to lose against.

Maritzburg, on the other hand, travel to Limpopo to face Marumo Gallants at the Peter Mokaba Stadium in Polokwane on the same day.